If the casual exposure to pop culture that seeps into our bones like radiation didn’t inform you, then let us repeat: Kanye West made an ass of himself at the MTV Video Music Awards this past Sunday, interrupting Taylor Swift while she was accepting the award for Best Female Video for “You Belong With Me.” 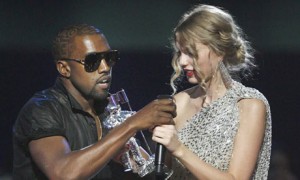 Is there anything within this perfect storm of pop – self-promoting MC, neo-country tweener star, gorgeous musical diva and the station that no longer plays music videos – that merits overthinking? Maybe. Perhaps if we stretch.

Oh, who are we kidding? This is rife with opportunity.

Why do the VMAs give an award for “Best Female Video”?

That the VMAs have any prestige at all has always seemed odd. The network that awards the Video Music Awards – MTV – is also the single largest broadcaster of music videos. It seems a bit disingenuous to lump consumption, distribution and acclaim in the same venue. It would be like Paramount giving out Paramount Movie Awards, all of the nominees being Paramount pictures by some odd coincidence, and then claiming that these awards had gone to the best movies of the year.

But pop culture awards don’t need a rigorous logic to justify them. Awards exist in order to have award ceremonies.

Awards ceremonies are an easy way of showering the biggest stars in a genre – movies, music, short movies that play music – with more attention. Everyone dresses up in high fashion, parades down the red carpet for hours before hand, and gets free interview time later about how great it was to win (winners) or what an honor it was just to be nominated (losers). And since popular artists require a spotlight to survive, an event with free publicity justifies itself. 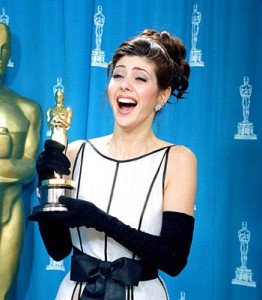 The 2009 MTV Video Music Awards gave out honors for each of the following categories:

Is the distinction between Breakthrough Video and Best New Artist worth heralding? Why are separate awards given for Best Rock Video, Best Hip-Hop Video and Best Pop Video – especially since every Pop Video worth watching these days draws heavily on rock or hip-hop? And isn’t Best Video That Should Have Won a Moonman too paradoxical for the young?

Most importantly: why Best Male and Best Female Videos? Are these simply categories added to inflate the total number of awards? Or is there something that distinguishes a Male Video from a Female Video, other than the gender of its star?

One obvious distinction: you never see a male star rolling around nude in a music video, erogenous zones obscured by glitter.

9 Comments on “I’m Going To Let You Finish”