And of course, we have the spectacle of Kanye himself.

West has a history of making an ass of himself when awards are involved. He interrupted the American Music Awards in 2004 to insist he should have won the Best Male Rap/Hip-Hop Artist title (he didn’t; Jay-Z did). He announced that he would “really have a problem” if he didn’t win the 2006 Grammy Award for Best Album of the Year (he didn’t; U2 did). He rushed the stage of the MTV Europe Music Awards later that year, arguing that he should have won the Best Video of the Year award (he didn’t; Justice and Simian did).

So West grabbing the mic is nothing new. And yet: 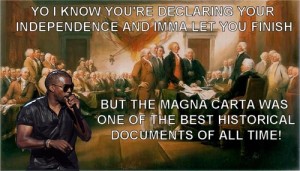 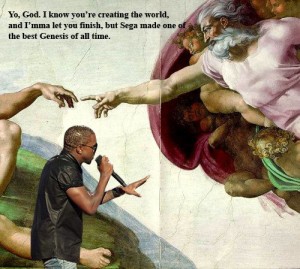 (all images courtesy of kanyegate.tumblr.com)

Why has this meme taken off in a way that his other rants haven’t? A few theories:

(1) This is the first time West threw such a tantrum in defense of another artist. The pretentiousness of Mr. West, self-appointed advocate for a pop star who doesn’t need advocacy, begs for satire.

(2) Not only that but, as mentioned above, he threw this tantrum needlessly. The voters agreed with him. Beyoncé did, in their eyes, make one of the best music videos – of the past year, if not all time.

(3) The sheer ridiculousness of his approach. If Kanye were genuinely happy for Taylor Swift and wanted her to finish her speech, he could have shown that more sincerely by applauding from his seat and letting her finish her speech. To take a microphone from someone and claim that they received an award incorrectly, yet you’re “happy for them,” approaches unheard-of levels of paralepsis.

(4) The Internet has changed. 2006 might not seem like that long ago, but social media, online publishing and Photoshop capabilities have exploded since then. More people have access to online platforms and ways to manipulate video, sound and image than they did the last time Kanye acted the fool. Blog posts, image macros, Facebook updates and YouTube videos can blow an incident up faster and keep it alive longer.

No artist ever lost the limelight for being too ridiculous. Kanye West will keep making music for as long as he can find the money. He will remain in the spotlight for as long as pop culture dictates he should (about three years, typically) and then find new and bizarre ways to reclaim it once his moment has passed. Taylor Swift and Beyoncé will continue to produce female music videos. Hey, they might even produce one together! That would be neat.

The furor over Kanye West’s outburst – how dare he interrupt a highly-paid star from thanking people for an award she’s already won! – will be trivia a year from now. And the thousands of cultural artifacts that this furor has produced – West’s apology on the Jay Leno Show, the YouTube videos of people calling West a jackass, the Photoshop memes above and the inevitable Saturday Night Live spoof – won’t even elicit a chuckle by then.

Perhaps that’s the meaning of “Web 2.0” or “the new media.” It produces intricate artifacts of immediate transience – huge monuments that start dissolving into sand almost as soon as they’re finished. Instead of a careful craftsmanship that takes months or years, we can now throw togeth– 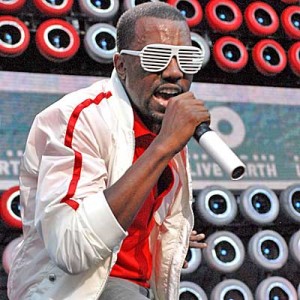 9 Comments on “I’m Going To Let You Finish”