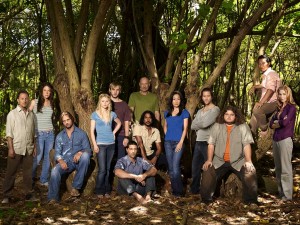 What, does no one smile in season four? Cheer up, guys!

Hey, folks!  I’m back and ready to Lost-ify.  Special thanks to Ryan Sheely for holding the fort until I returned.  I haven’t read his article yet—he warned me it was not only primarily spoilers, but in fact only spoilers—but my mother ensures me that it is an enchanting piece of work.  If you haven’t read it yet, please do so—but only if you’ve seen all of Lost season five.

I, however, am way back in the land of the fourth season, and I’d like to talk about time.  Time is… confusing.  To say the least.  (I know this because I saw The Time Traveler’s Wife last night.  My one-word review of the film: Mehhhhhh.)

We humans tend to think of time as a straight line pointing forward—but is it, really?  Lost’s writers certainly don’t think so.  That would be too simple, and, as we well know, Lost doesn’t like simple.

Plot-wise, Lost’s fourth season was exciting and somewhat overwhelming.  A staggering number of important events occurred over the course of just twelve episodes.  Because there was so much plot, it was hard for me to tell if there was an overarching theme tying everything together.  But if I had to pinpoint one main theme of this season, it would definitely have something to do with the nature of time.  Over the years, science-fiction writers have used time travel and paradoxes to explore many different themes: the inability of humans to escape the deterministic nature of the universe, the joint themes of regret and revenge, love’s ability to transcend time and space.  So this week, I’ll try to answer this question: when Lost starts talking about time machines and psychic flashes and trick flashforwards, what is it really talking about? What is time a metaphor for?  At heart, what is season four of Lost about?

But first, let’s recap the episodes I watched over the past two weeks:

Episode 4.1 (“The Beginning of the End”): Or is it the end of the beginning?!  In the present, the clan splits in half yet again!  Half of the group follows Locke and Hurley to the Barracks to become Team “We Don’t Want to Be Killed by the Freighter Crew,” and the other half sticks around with Jack as Team “We’re Getting Off This Friggin’ Island No Matter What.”  Also, Hurley finds Jacob’s cabin and Jack’s dad is inside, because that makes complete sense.  Meanwhile in the future, Hurley sees Charlie’s ghost, gets involved in a police chase, goes back to the asylum, meets up with The-Creepiest-Dude-In-the-Whole-Show-Which-is-Really-Saying-Something-When-You-Think-About-It (a.k.a. Mr. Abaddon), and notices that Jack has a beard.  Phew!  You see why I said the amount of plot stuffed into this season was overwhelming?

Episode 4.2 (“Confirmed Dead”): This time around, we get flashbacks for the four new cast members: Faraday, the twitchy physicist who cries while watching the news; Miles, the sarcastic and shady medium; Charlotte, the not-particularly-interesting anthropologist who once found a Dharma polar bear in the desert for some reason; and Lapidus, the grizzled but friendly pilot who was supposed to pilot Oceanic 815.  In the present, Team Jack hangs out with Faraday, Lapidus, and Miles; Team Locke has imprisoned Charlotte and Ben Linus.  Also in the present, I laugh every time someone says “Lapidus,” because I always hear “the penis.”  Hur hur hur.  But he’s a cool guy, really.

Episode 4.3 (“The Economist”): I’m renewing my Sayid fan club membership.  (Or, as my boyfriend would say, my girl wang is engorging into a new Sayid boner.  Classy.)  In the present, Sayid trades Miles for Charlotte and gets a spot on Lapidus’s helicopter, along with Desmond.  Oh, and Ben has a spy on the freighter–But Who?!  In the future, Sayid has become the main character in a LeCarre novel and is boning German fox Elsa to get at her employer, the titular Economist.  But Elsa is double-crossing Sayid, and Sayid has to kill her.  And also Sayid is working for Ben Linus!  I love this episode.

Episode 4.4 (“Eggtown”): A bit of a disappointment after the last episode, Eggtown was about how Miles knows What Kate Did and about how Kate leaves Sawyer for Jack.  This isn’t Eggtown; this is Yawnsville.  Meanwhile, in the future, Kate gets off with probation and goes back to her son, who is neither Sawyer’s nor Jack’s but is actually Aaron.  Aha!  So Desmond’s flash of Aaron and Claire getting off the Island was only half-right.

Episode 4.5 (“The Constant”): This episode is going to be hard to recap.  Well.  In the present (?), Desmond gets Island sickness from leaving the Island and now thinks he’s the Desmond from 1996 and in the Royal Scots Regiment.  He will die unless he can find a constant that exists in both eras, i.e. Penny.  (P.S.: Lost, that is not what a scientific constant is.  FYI.)  In 1996, Des meets up with past!Faraday, who is working on a time machine for small fuzzy animals.  Except the small fuzzy animals tend to die after they travel in time.  Whoops.  Fortunately, past!Desmond gets Penny’s phone number and calls her in the present, thus saving his life, and it is totally cute.  My notes for the end of this episode read, “AWW” in really big capital letters.  It’s not my favorite Desmond episode, but I approve, Lost.  I approve.

Episode 4.6 (“The Other Woman”): Again, any episode after “The Constant” was bound to be a disappointment.  This one was just okay.  In the past, Juliet was boning Goodwin, who was married to her pissy shrink, and Ben was a petty mofo because he wanted Juliet.  Boo-hoo, Ben.  Go jerk off, okay?  In the present, Juliet and Jack try to stop Faraday and Charlotte from letting out the poison gas from the Tempest station, but they claim that they were only neutralizing the gas so Ben can’t use it again.  Then Juliet and Jack make out.

Episode 4.7 (“Ji Yeon”): Okay, this episode is also hard to recap.  There’s a flashforward, a flashback that looks like a flashforward at first (Pretty sneaky, Sis!), and two present day plots.  Flashforward: Sun has a baby, and Jin is dead.  Flashback that pretends to be a flashforward: Jin runs to get a stuffed panda for someone who is pregnant, but it’s not Sun; it’s some other person.  Present day on the Island: Juliet tells Jin that Sun had an affair.  Present day on the freighter: Des and Sayid find Ben’s spy–hey, it’s Michael!–and learn that Charles Widmore arranged for the fake Oceanic 815 that’s under the sea.

Episode 4.8 (“Meet Kevin Johnson”): I don’t think I’ve said this before, but I do like Michael.  I’m glad to see he’s back, and I am sad he’s gotten himself into such a bad situation.  I kind of wish he didn’t kill two people… but on the other hand, what an amazing plot twist it was!  So I can’t really hate the guy.  He made for good television.  Anyhow, in the past, Michael got off the Island but now Walt won’t talk to him because, you know, he killed two people.  Michael tries to kill himself a bunch of times, but apparently the Island a) can work its magic even from very far away and b) is anti-suicide.  Luckily, Tom and his gay lover are available to give Michael a way out: if he kills Charles Widmore’s people on the freighter, he’ll save the Losties and get his soul back.  But he shouldn’t kill all of them, only the bad ones.  Ben doesn’t like killing innocents… at least until the season finale.  Then he’s totally cool with it.  Meanwhile, back on the Island, Rousseau (sob) and Karl get shot down, leaving Alex alone in the woods with the assailants.

Episode 4.9 (“The Shape of Things To Come”): I liked this episode a whole lot.  Oh, lordy…  Am I a Ben Linus fan?  I think I might be.  I didn’t know that about myself until right now.  In the present, the freighter’s doctor washes up on shore, dead, but he’s still alive on the freighter.  Oh, space-time.  How wacky you are.  Also in the present, Keamy uses Alex to bring his crew into the Barracks and blow up Claire’s house.  (She’s fine, though.)  Keamy says he’ll trade Alex for Ben, but Ben says, “Hells no!” and is shocked when Keamy actually kills Alex.  That poor girl.  She didn’t even get a flashback.  Then, Ben summons the smoke monster, which beats up on Keamy’s crew.  That was hot, Ben.

Meanwhile, in the future, Ben Linus is an international man of mystery, running around Tunisia, Iraq (where he visits the bereaved Sayid, his soon-to-be personal assassin), and England.  In England, he has a very interesting conversation with Charles Widmore, in which some mysterious rules are mentioned (“You’ll wish you never changed the rules!”) and in which Ben vows to kill Penny.  What a fantastic plot twist!  But oh man, do I worry about Desmond now.

Episode 4.10 (“Something Nice Back Home”): In the present, Jack needs his appendix out, and Claire inexplicably runs off with Christian Shephard.  In the future, Jack starts going a little nutty but doesn’t yet have a beard.  Meh. 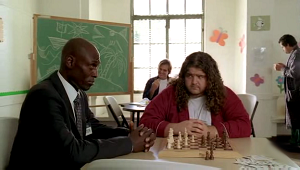 Episode 4.11 (“Cabin Fever”): In the past, John Locke was a preemie born to teenage Emily Locke.  Hey, I just realized that Ben’s mom’s name was Emily, too.  Are Locke and Ben related?  I’d buy that.  But I guess that would have to require that Ben’s mom didn’t actually die giving birth to him, because otherwise how could she show up in “Deus Ex Machina”?  Well, by time travel, I guess, but that seems kind of forced.  Then again, Lost loves time travel!  Eh, I guess we’ll see.

Anyway, over the course of Locke’s life, he was followed around by Richard, who seems to be some sort of immortal Professor Xavier figure, and Abaddon, who was still creepy like whoa in the past.  In the present, Keamy stages a mutiny and decides to torch the Island, and Locke, Ben, and Hurley try to track down Jacob.  Locke enters Jacob’s cabin and finds Claire and Christian, who tells Locke he needs to move the Island.  Yes, that’s right.  Move the Island.

Episode 4.12 (“There’s No Place Like Home”): Here goes.  In the future, the Oceanic Six lie about what happened on the Island.  Sun becomes the badass I always knew she could be and buys up her dad’s company to screw him over.  Jack finds out he’s related to Claire and Aaron.  In the present, Locke and Ben go down into the Orchid station, which has a time machine (yay).  Ben kills Keamy, which means the freighter will blow up from his dead man switch, and then Ben moves the Island.  But before that happens, the Oceanic Six plus Sawyer get on the helicopter.  Michael dies in the freighter explosion, and Jin theoretically dies but I won’t believe it till I see a body, and Desmond meets up with Penny.  Sawyer jumps out of the helicopter ‘cause they’re running out of gas, so probably by this time next season he’ll be sexing up Juliet, which I find incredibly weird.  Finally, the Oceanic Six get home, the present meets up with the future, and this Jeremy Bentham everyone’s been talking about is actually John Locke and now he’s dead to boot.  Ben tells Jack he can’t go back to the Island without everyone else, but Claire tells Kate in a dream not to bring Aaron back.  Also: they moved the Island!  They actually moved it!  That’s too cool.

(A note: Yes, I’m writing about the whole season this week, not about bits and pieces.  There were so few episodes to begin with, and I felt like watching them all.  What?  They’re addictive.)