If season four of Lost was about anything other than being incredibly addictive television, it was about time: time travel, paradoxes, rates of change, memory.  The season was so packed with plot, however, that it’s difficult for me to see if there’s one thematic through-line that ties the whole season together.  So rather than try to force a single reading of the season, I’ll give you several of them, and you can decide which, if any, makes the most sense to you.

Analysis: In “The Beginning of the End,” the “time theme,” if you will, is regret.  (I hasten to mention, for those of you who do not know, that regret isn’t possible without the passage of time.)  Hurley regrets leaving the Island, just as bearded Jack did at the end of the last season.  Hurley is also visited by ghosts—specifically, the ghost of Charlie, and, later on, the ghost of Mr. Eko.  Ghosts, while not directly related to time travel, are usually metaphors for regret.  Ghosts also tend to live outside of time.  From a psychological standpoint, Hurley sees the ghost of Charlie because he regrets letting him die.  From a plot standpoint, Charlie is a real ghost who arrives to tell Hurley he’s made a huge mistake: Hurley and the others must go back to the Island, and Aaron must not be raised by Kate and Jack on the mainland.

Likewise, in “There’s No Place Like Home,” the Oceanic Six are haunted literally by ghosts (Charlie, Libby, and Claire—does this mean she’s dead?) and figurative ones.  Sun regrets leaving Jin to die on the freighter, and Kate is clearly thinking about Sawyer all the fricking time.  Sun doesn’t actually see the literal ghost of Jin, and Kate doesn’t literally see Sawyer’s ghost, but their memories clearly haunt them throughout the season finale.  The memory of the Island haunts them, too.  It’s clear that they all regret leaving the rest behind. 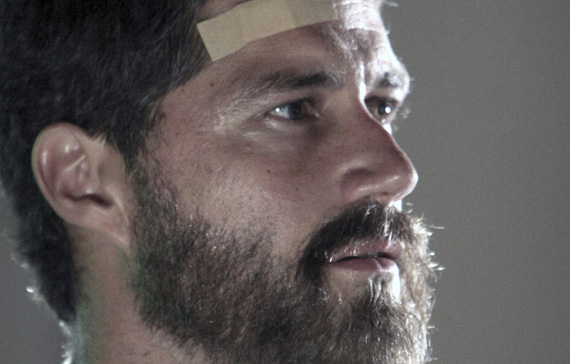 Analysis: Here, the “time theme” is not only regret, but revenge.  In “The Economist,” Sayid works for Ben to get at Widmore to get revenge for Nadia’s death.  At the same time, though, Sayid falls for Elsa, probably trying to recapture his lost love for Nadia.  However badass Sayid tries to be, he is, at heart, a hopeless romantic.  He fell hard for Nadia, and, now, he’s falling hard for Elsa, probably because she reminds of him of his lost love.  Sayid’s assassination of Elsa is both revenge for Nadia’s death and a symbol of his regret over it.  He cries at the end of this episode not just for Elsa but for Nadia.  Just as he killed Elsa, he allowed Nadia to die.  Regret and revenge work hand in hand here.

The same mingling of regret and revenge occurs in “The Shape of Things to Come.”  In retrospect, the idea of having Ben and Sayid work together is rather brilliant.  Both of them are, on the outside, cold-hearted killers, but both are also grieving on the inside.  As in “The Economist,” “The Shape of Things to Come” is stained with the memory of a tragic and preventable death—in this case, Alex’s.  In revenge, Ben will kill Charles Widmore’s daughter.  Charles, meanwhile, thinks he’s acting in revenge for Ben’s taking over the Island so many years ago.  In both Sayid and Ben, the pain of regret is channeled into the violence of revenge. 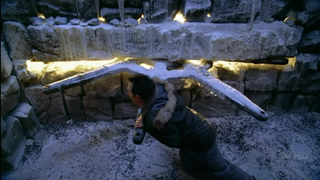 Analysis: In this episode, the flashbacks we’ve seen throughout the series have been literalized.  Desmond is literally flashing back and forward through time.  What is the theme here?  Why, love, naturally.  Desmond is shuttled back and forth through time and through his own memory but manages not to die because he is tethered by a constant: his love for Penelope.  In this reading, time travel is a slick sci-fi device used to illustrate an age old axiom: true love waits.  (Alternatively: true love is destined.)  Finally, we have some optimism.  In the past, Desmond regretted what he did to Penelope.  Now, through the dual power of time travel and love, he’s able to right that wrong.  Unlike Sayid, Ben, and the Oceanic Six, Desmond no longer needs to regret, because time travel saved the day. 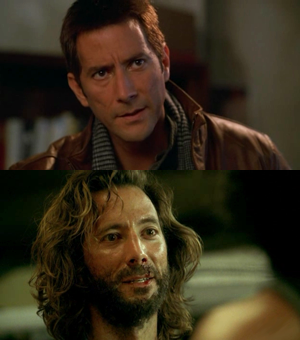 Analysis: In this case, time travel is used as a simple trick: the supposed flashforward is actually a flashback.  At first, I thought the writers just wanted to screw with me, as in, “Ha ha, you thought Jin was rushing to Sun in the future, but really he was rushing to some other woman in the past.  Fooled you!”  I suspected they didn’t want to use the multiple flashbacks and flashforwards toward any thematic end.

On the other hand, the trick did show how far the Sun-Jin relationship has come.  In the past, Jin only cared about work, not his wife.  Now they care about each other so much that Sun calls for him when in labor and buys up her father’s company out of revenge for Jin’s death.  On the Island, the once heartless Jin forgives his wife for having an affair, something I believe he never would have done had he not crash landed on the Island in the first place.  Although this episode ends on a down note at Jin’s grave, overall I see this story as one of redemption.  Whether the writers meant to or not, the multiple timelines in this episode managed to get across a good theme: there are second chances. 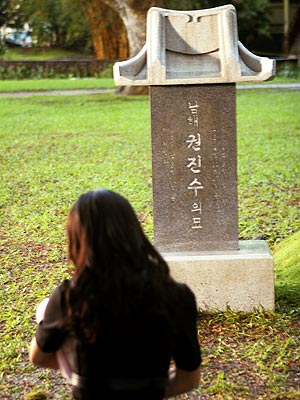 Analysis: In this episode, we get hints of the cyclical nature of time.  Repetition is a theme here: Richard visits young Locke just as he once visited young Ben.  Abaddon visits Locke in the hospital just as he visited Hurley in the mental institution.  Young Locke screams “don’t tell me what I can’t do” the same way he did back in “Walkabout.”  In the cabin, Claire acts creepily content, like she did back in “Maternity Leave.”  And, of course, Christian Shephard pops back for the bazillionth time.

The scene where the ageless Richard visits Locke back in the foster home is particularly interesting.  Richard asks boy Locke which items are his, which suggests that Richard knows Locke in the future—and very well, in fact.  That brings up the question: how does Richard know future Locke so well?  Is Locke in the future actually Jacob?  But if Locke is dead in evil-beard-future as Jeremy Bentham, how can he be Jacob, too?  Is Jacob a ghost?  Or, better yet, is he Locke’s ghost from the future who can also travel to the past?  (Because ghosts can totally time travel?  Hey, it worked in Dickens.)

Really, I have no idea.  Thinking about all this stuff is giving me nosebleeds.  In any event, it does seem like Lost is trying to set up some time loops here.  Things seem to be happening in the present or future not due to random coincidence or due to cause and effect, but because they already happened.  Under this reading, everything in this universe has already happened–everything–and thus everything is predetermined.  It’s Desmond’s fatalism all over again.

So what’s the true theme of season four of Lost?  Is Lost a pessimistic show about the never-ending, predetermined cycle of regret and revenge?  Or is it an optimistic show about the redemptive power of love?  If one’s destiny is already set, is that a good thing—as in, Desmond and Penny are destined to find each other again—or a bad thing?  Is destiny, as Ben Linus says, a fickle bitch?  Sound off in the comments.

Next time on Overthinking Lost: I really have no idea.  What will season five bring?  If it’s as crazy as season four was, more wacky time-related hijinks are on their way.

Remember: No spoiling season five for me!  If you want to talk about season five, do so in the thread beneath Ryan Sheely’s spoileriffic post.