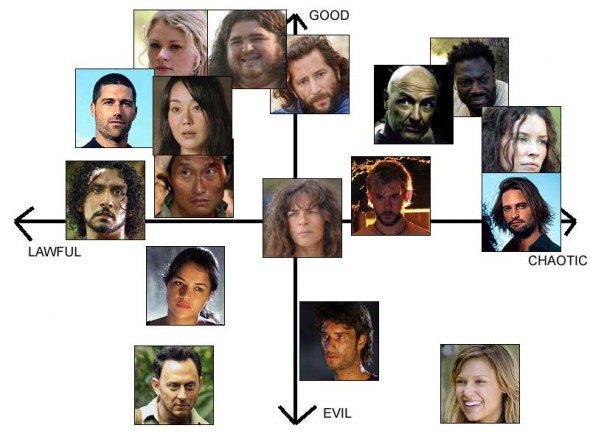 Lost's complex moral alignments, season 3. This was hard to make and probably not accurate. I left off Juliet for the time being. I'm not really sure where to put Locke.

Midnight in the Island of Good and Evil

Last week, I talked a little bit about Lost’s relationship to the concepts of Good and Evil when it came to the character of Mr. Eko.  I claimed that Mr. Eko was a personification of the moral gray area, especially when it came to the concept of “the ends justify the means.”  At once, Mr. Eko was a gangster and priest.  He was a priest who murdered, or a drug dealer who worked to save his brother’s soul.  He killed three to save a village.  He stole to feed the hungry.  Like I said last week, the image of the Virgin Mary statue with the drugs inside is a good symbol for Mr. Eko’s complex moral alignment.

But his death at the hands (teeth? smoke?) of the Monster showed that the Island didn’t buy his complex morality.  Mr. Eko refused to apologize for his actions, and therefore he was killed.  Like Ben Linus, the Island is a moral absolutist, and the Island doesn’t forgive, especially if you don’t beg for forgiveness.

But then in the comments, you guys told me the only reason this all happened was because Mr. Eko’s actor, Adewale Akinnuoye-Agbaje, wanted to leave Hawaii and the show.  That’s very similar to what led to the episode, “Exposé.”  Paolo and Nikki were also killed by the Island not because the Island decided they needed to, but because Lost’s writers decided they needed to—after all, their characters were so damn unlikeable.  Wikipedia also suggests that Ana Lucia might have been killed off because the producers found her “intensely unlikeable,” too.  (There’s also some speculation that it had something to do with Michelle Rodriguez’ DUI.)  The question is: if these episodes came about because of circumstances external to the show, should we consider these episodes canon?

Of course we must.  We can’t know what the writers were planning on doing before life and ratings changed their plans.  (Well, maybe we can in special features, but I said I wouldn’t watch those until after I finished the series.)  What is interesting is that whenever the writers needed to remove a character from the show, they did so by giving him or her a karmic death.

And so we turn back to the question I brought up starting week two of this series: is the Island a Total Karma Island?  Is the Island place where the Good are rewarded and the Bad are eaten up during random encounters with the smoke monster?

In the cases of Eko and Paolo and Nikki, yes.  In the cases of everyone else, no.  Sawyer is clearly not a Good person.  He’s certainly not on Jacob’s List, whatever that is.  But he ain’t dead.  The only karma that came to him was when he was chased around the island by a pig back in the first season.  Likewise, Kate blew up her step-dad, but she didn’t get blown up in a deliciously ironic fashion.  (Yet.)

Or take Kate: did she blow up her step-dad?  Yes, she did.  But was he an abusive asshole?  Yes, he was.  But did she do it for selfish reasons?  Yeah, probably.  But is she a good person now on the Island?  Well, for the most part, she is.  Is she going to get a karmic death or not?

Moral grayness.  I appreciate that.  That’s why I will say this loud and clear, though I never thought I would.  Kate Austen, I appreciate you as a character.  You may not be as interesting as Mr. Eko or Desmond, and you may not be as likeable as Sawyer or Hurley.  But, man, in comparison to Paolo and Nikki, you are gold, lady.  Pure gold. 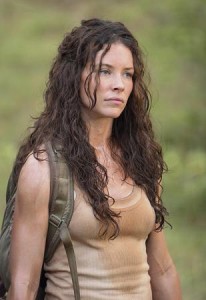 Kate Austen: Not as bad as we thought.

Sorry, I got off track for a second.  Anyway, based on all this analysis about Good and Evil, here’s what we have so far: the Island is Total Karma Island when the writers need to kill someone off, but Total Redemption Island when it comes to the main characters like Jack and Kate and Sawyer.  Now let’s complicate things even more.  What about the Others?

The Others, apparently, have a list of Good People.  Jacob made this list.  Jacob loves me.  That’s nice.  Who the hell is Jacob?

The Others also write up their own lists.  In three days, Goodwin managed to write up a list of the tail section of the plane.  Ana Lucia, understandably, didn’t make the cut.  For some reason, neither did Bernard.  I’m going to guess that Bernard is a puppy rapist.  That’s the next Bernard-related flashback, right?

Ethan was sent to write up the list for the front section of the plane, but he never got to it.  He was too busy kidnapping Claire and getting shot in the chest.  Locke was apparently so Good that Ben Linus himself went out into the jungle to pick him up.  I wouldn’t be surprised if Juliet infiltrated their base in order to continue filling out that list.  I’m not exactly sure why she needs to meet them to accomplish this task—after all, doesn’t she already have files with all their personal information inside?  I’m also not sure how she’d be able to figure out in a week who is Good and who is Evil.  If I had to write up such a list, having watched two and a half seasons of this show complete with flashbacks, I’d have a pretty hard time of it.  Apparently Jack’s not on their Good list, but I haven’t yet seen anything to prove that Jack is a bad person.  A stupid person, often, but not a bad person.  Shows what I know, I guess.

Anyway, it seems the Others are building some sort of Garden of Eden filled with only Good people and no Bad people.  Except for the fact that the Others don’t seem too nice to me at all, what with their random kidnappings and hangings and trapping people in cages and stealing babies.  But a Garden of Eden it is: no one gets sick (except for Ben, for some reason), and no one has babies.  Juliet is their Cain, who was marked and cursed to live out with the savages.  She might also be their Eve, if she can ever figure out how to make the pregnant women stop dying.

So, we have the Others and the Monster, who believe in a strict line between Good and Evil, and who don’t believe in forgiveness, on one side.  We have and Lost’s writers, who do seem to believe in moral gray areas and forgiveness unless external circumstances make them think otherwise, on another side.  Moreover, as I mentioned last week, we have the notion of fate, wrapped up in Desmond, the psychic.  Where does someone like Desmond fall in the map of morality?  As I said before, if the universe is controlled by a fate-principle, it’s not really fair to call people “Good” or “Evil,” because their actions are not in their control.  Good and Evil can only exist in universes with free will.  (I know there have been philosphers over the years who have claimed that, yes, you can mix morality with determinism.  Philosophically and academically speaking, I think their arguments are poopy-headed and dumb.  Nyah!  So there.)  Desmond is quickly becoming a fatalist: everything is determined, nothing can be changed, there is no free will, and it’s probably better to just sit back and accept it.  There something to be said for the fact that Desmond is trying to change fate, anyway, but I think eventually he’s going to give up on that and say “to hell with morality.”  In a deterministic universe, there can be no such thing. 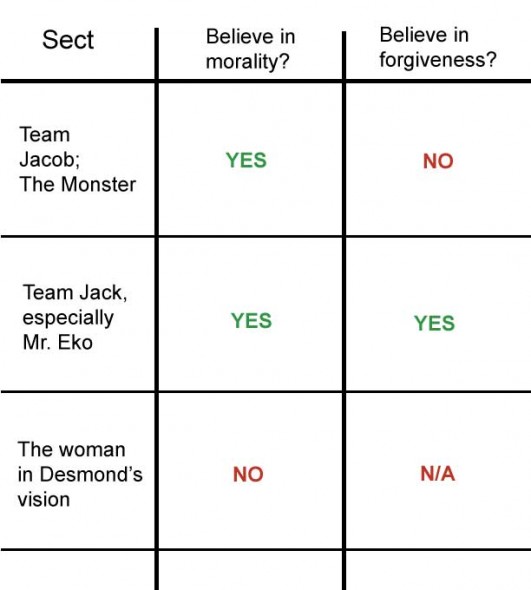 We have three different sides here: the moral absolutists—the Others, Jacob, the Monster, and possibly John Locke, though I can’t tell yet; the moral grays—Mr. Eko, most of the Islanders, I think possibly the writers; and Desmond the fatalist.  Who will win in the end?  I guess we’ll just have to keep watching to find out.

Next week on Overthinking Lost: Hopefully, I’ll have more information about the mystery box and be able to talk about that.  Mystery box!  Oooooohhhh.  Spooky.

Also: I enjoyed this.