The writers of Lost were in a pickle.  They had introduced two new characters into the main cast—Paolo and Nikki—but for some reason the characters didn’t take.  Though they barely appeared on screen and spoke very little, the fans seethed at them with a burning hatred.  There was only one thing left to do: kill Paolo and Nikki off.

This all led to the inception of Episode 3.14, ‘Exposé,’ a happy little morality tale from the point of view of two ascended extras.  Paolo and Nikki weren’t just two annoying side characters.  No, they too enjoyed interesting backstories.  She was an actor; he a chef.  She seduced a wealthy Hollywood player; he killed him.  Together they stole his diamonds and flew to Los Angeles.  But fate had a different story in mind for these crooks.  They were meant for the Island.

(Also, Nikki worked with Billy Dee Williams.  Was that stunt casting meant to foreshadow her eventual betrayal of her own Han Solo, Paolo?  I like to think so.) 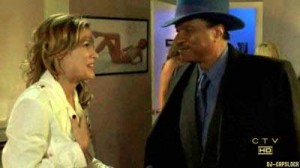 "You look absolutely beautiful. You truly belong here with us among the clouds."

Anyway, the episode plays out as part murder-mystery—“Who killed Nikki and Paolo?!  I must know!”—and part clip show, as the dastardly duo make their way through the important plot points of Lost’s first and second seasons: the crash landing on the island, the discovery of the heroin plane, the discovery of the briefcase in the lake, the opening of the hatches, and so on.  Paolo finds the diamonds and hides them from Nikki.  Nikki finds out about the diamonds and throws a paralyzing spider at him.  The Island finds out and throws paralyzing spiders at both of them.  Sawyer and Hurley bury them alive.  Everyone learns a lesson about not killing your employer and stabbing your co-criminal in the back.  The end.

What’s wrong with this episode?  It’s not terrible.  There aren’t any gaping plot holes or weird character inconsistencies or anything like that.  Nevertheless, as I said above, the whole thing left a bad taste in my mouth.  Why?  Because it was a morality tale.

When I saw “morality tale,” I mean it in the old-school sense of the word.  It had a very medieval feel about it.  Like Nikki represented Vice or Greed and Paolo represented Lust or Timidity.  Or they were both witches and the Island was metaphorically burning them at the stake.  Or you could look at it in a slightly more modern way.  “Exposé” was an old-school horror flick in which the lusty, sinful teens get their comeuppance.  Maybe it should have been called, “I Know What You Lost Last Summer.”

A slightly more generous reading would say it’s like Reservoir Dogs, another film that was technically superb but also left a sour taste in my mouth.  For some reason, stories that seem to be shouting, “Watch as these bad people die horribly as their comeuppance for being bad!” aren’t my thing.

But at least the guys in Reservoir Dogs had style.  Nikki and Paolo, on the other hand, weren’t only Bad.  They were completely unlikeable.  Not a Pet the Dog moment to be seen.  If they had worn black hats and twisted their mustaches, it would have been about as subtle as the episode itself.  And that’s why I didn’t really like “Exposé.”

But here on Overthinkingit.com, we don’t review; we analyze.  So now that I’ve explained why I didn’t really like “Exposé,” I’d like to move on and talk about what an episode like this says about Lost as a whole.