Question 2: I’m curious: what do you think is going to happen to Michael and Walt?  Do you think Ben Linus will actually let them go home or what?

Well, if my above theory is correct—and I always assume my theories are correct, even when they are completely absurd—then Ben didn’t send them to a place but to a time.  Either Michael and Walt will go home with no memories of what happened to them, or they’ll go home and realize the Island doesn’t exist in this time period.  They’ll bring a rescue crew to the Island’s coordinates but won’t find anything there—just the weird energy signatures Penny’s crew found.

Question 3: As you said last week, John Locke is a very complicated character.  What do you think he really represents?  Is he supposed to be man in a state of nature, or is he just a wimp who lets his daddy push him around?

This is a very difficult question that I don’t think I’ll be able to answer in full today.  So far, over the last six weeks, I’ve claimed that Locke is Jesus, Locke is man in the state of nature, Locke is Simon from The Lord of the Flies.  In this week’s episodes, Lost gave us a new parallel: Locke is both Cain and Abel.  Both the hunter and the farmer.  Simultaneously loved by God and cursed by Him.  Both a believer and an unbeliever.

So I think the show’s writers want me to be confused by Locke right now!  Remind me to come back to this question later in the series when I know more about John Locke.  For instance, how did he get paralyzed?  Well, I dunno!  So I can’t answer your question, not just yet. 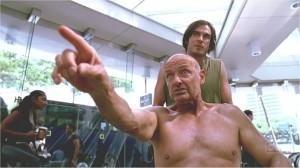 The Island thumper in action.

Question 4: What do you think about the postmodern telling of the tale—the flashbacks, the shuffled order of events, and so on?

I’m not quite sure I’d go as far as saying Lost is postmodern in nature.  Flashbacks alone do not a postmodern text make.  If Lost were a novel, you wouldn’t see them as flashbacks, anyway.  It would just say something like, “When Sun was a little girl she broke a glass ballerina and blamed it on the maid.”  That’s not really postmodern.  That’s just a tense shift.

But then, “postmodern” is a tricky word to begin with.  Back in college I took a course on fantasy and science-fiction writing.  The first day, the professor said, “Don’t write anything postmodern.”  That’s easy when you’re writing in standard speculative sub-genres, but sometimes there’s a real overlap.

Take something like “Flashes Before Your Eyes,” the Desmond-does-Slaughterhouse-Five episode.  Is that postmodern, or is it sci-fi?  The tale is told in a roundabout way.  There are time jumps.  You could say, “This is postmodern.”  Or, you could say, “This is a simple time travel story.”  Everyone seems to agree that Slaughterhouse-Five, which has a very similar premise, is postmodern, but that may be less because of the time travel stuff and more because o Kurt Vonnegut’s meta-literary conceits.  Or take The Time Traveler’s Wife.  Is it science-fiction, postmodern, or something else?  I don’t even know anymore.

So let’s do away with these rather useless labels and just talk about how the nature of the telling in Lost affects the way I understand the text.  Sometimes, I think the flashbacks are great.  They give a very good insight on the way past affects present.  We’ve talked time and again about how fate is a theme in Lost.  Maybe cause and effect is another theme.  Is cause and effect the same thing as fate or determinism?  Someone else will have to answer that question, because I’m hungry and my brain is foggy.

Other times, I’ll admit, it seems like the flashbacks are there because A) the audience has come to expect them and B) it’s a good way to fill out an episode that doesn’t really have much going on in it.  (See this week’s Kate-related episode, “I Do.”)  But even then I still like the flashbacks, because I like to understand the different sides of a character.  That’s something movies, being only two hours or so long, cannot do.  Even a book cannot give the same depth of character five seasons of a show can provide.  So kudos, Lost writers.  Whether or not your flashbacks are postmodern, they are surely a nifty storytelling device.

Question 5: In some ways, Mr. Eko seems as paradoxical a character as John Locke.  Do you buy his conversion from gangster to priest?

While I saw Locke as a paradoxical character, Mr. Eko never seemed that way to me.  “The Cost of Living” explained his ethos perfectly.  He believes, and has always believed, that if you do something to survive, God will forgive you for it.  To him, the ends must justify the means.  A little boy asked him if he was a bad man, but Mr. Eko has never believed in a simple split between Good and Evil like Yemi or The Others did.  Thus there was no way to answer such a question.

Then he came to the Island.  Like many others, he came to believe he was there for a reason—to push a button.  This gave him another reason to believe he would be forgiven.  If his whole life was leading up to this noble task of pushing the button, if everything that happened was part of a life God gave to him, then how could anything he did be considered evil?  That’s the problem with fate, kids.  If you don’t have free will, “good” and “evil” don’t really mean anything.  Everything you do is in the service of God’s plan.  Which must be good!  As Satan sang in the South Park movie, “Without evil there could be no good, so it must be good to be evil sometimes.”  (By the way, I think this may be a very important theme in Lost, so I’ll be coming back to this question in the future.) 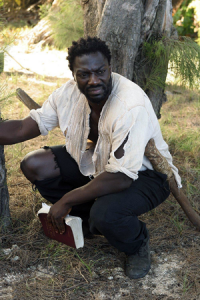 Why'd ya have to kill of Eko, Lost? Now there are NO black men left on the Island. Was that your plan all along?

Long story short: No.  I don’t see any paradox in Mr. Eko’s character.  I think that when he was a gangster, he thought like a priest, and, when he was a priest, he acted like a gangster.  He’s the Virgin Mary statue with the heroin inside.  A complex character, to be sure, but not a badly-written one.

Next time on Overthinking Lost: How can Kate’s armpits stay so smooth when she’s been trapped in a cage for more than a week?

Remember, everybody: No spoilers, please.