Question 1: You’ve been talking a lot about character and political theory and literary allusions lately.  Why don’t you ever talk about the weird shit that’s going down on the Island?  The four-toed statue, the crazy purple light, the smoke monster, the way Walt’s mouth movements never seem to match what he’s saying.  What the hell is going on here?!

Over the past few weeks I’ve gotten this question or comment several times.  There seems to be an insistence that my posts, while interesting curiosities, are focusing on the wrong things.  That I am, as it were, missing the point.  Maybe.  But I think the fault is not mine alone.  It is also the fault of the show.

It is my fault in that my mind tends to naturally head in the direction of political theory, literary theory, philosophy, and the like.  You can look back at my other posts on other topics if you need proof of that.  (Except this one.)  But the show is at fault, as well.  In order for me to overthink something (rather than “regular-think” it), I need information.  I need to be able to understand the plot on a literal level before I can dig deep and get at the themes, the inconsistencies, the references, and so on.  I haven’t yet tried to overthink the magical elements on the Island simply because I still don’t know what the hell they are.  That’s the show’s fault.

That said, I can certainly try to regular-think the mythological stuff!  Using my powers of deduction and cracked-out imagination, I shall attempt to figure out what is going on on this Island.  My theories will likely be ridiculous and incorrect, but I am hoping you will find them an amusing diversion from your work.

So here’s my theory: time travel.  Episode 3.8 was the first to point out time travel as a legitimate answer to all of these mysteries.  Maybe the question isn’t “where is the island?” but “WHEN is the island?”  I think Hurley made a joke along these lines at some point in the second season—just like Sawyer made a joke about the aliens.  I’m willing to take both these jokes seriously. 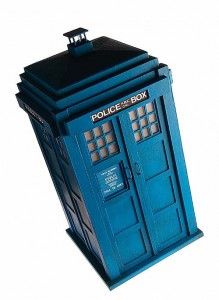 How the first members of the Dharma Initiative got to the Island.

My theory is that the Island is located smack dab in the middle of some space-time anomaly, so that it actually exists in the distant past.  The burst of electromagnetism that came out of the Island when Desmond failed to push the button several months ago pulled Oceanic Flight 815 into the anomaly.  So where is the Island?  Maybe it’s in the distant, distant past.  Like, say, the prehistoric past.

Remember that the Dharma dude on the film strip never said, “push the button or the world blows up.”  He just says it is “of utmost importance” that the button is pushed.  That is quite different.  So here’s my theory.  It’s the 2001: A Space Odyssey theory.  1960’s SPOILER ALERT: In 2001: A Space Odyssey, an alien precursor race left creepy monoliths on and around Earth to evolutionarily bootstrap humans, thus bringing our species to more advanced stages of evolutionary development.  For instance, at the beginning of the film, a bunch of apes find the monolith and immediately learn to use tools and weapons. 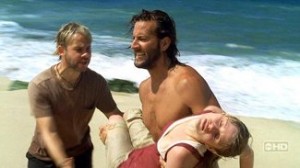 So let’s imagine the whole Island is a 2001-esque monolith.  The Island’s weird electromagnetic properties bring species to new levels of development.  Some weird four-toed aliens dropped the Island onto Earth to give humans sentience.  They also transported a small contingent of humans there to protect the Island and make sure it remained working properly in the prehistoric past so prehistoric humans would remain on the right evolutionary path.  That small contingent of people—who live in a time bubble in the distant past but have links to the outside world and the future—eventually named themselves the Dharma Initiative.

But the Dharma Initiative got greedy.  They decided they wanted to see what happened if humans who were already sentient—20th century humans—were brought to the Island.  This was The Incident–and for some reason it freed The Monster.  But what happened to the 20th century people who were brought to the Island?  Well, some of them moved up the evolutionary ladder.  They developed psychic powers.  This is how Walt was able to project himself around the jungle, and how Locke was able to “speak with the Island.”  Now that Desmond turned the failsafe key, he got those powers, too.

The question is, what are they planning to do with these “special” psychic people?  Does Ben Linus have some evil scheme up his sleeves?  Maybe a scheme to bring down my imaginary aliens, possibly with an army of genetically-altered polar bears, and break into alien Heaven with all the “good” people on his list?  I sure hope so.

And that’s my crack theory.  Stupid, yes.  Ridiculous, yes.  But wrong?  …Actually, probably yes.  And don’t ask me why Locke’s legs started working again, and why Rose’s cancer went away.  I have no freaking idea.