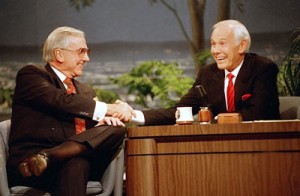 The passing of Ed McMahon earlier this week actually signaled the end of an era. The sidekick of Johnny Carson for more than thirty years on “The Tonight Show,” McMahon was an easily-caricatured personality mostly because he was just as exaggerated and ebullient as his many imitators. It would be a shame to remember him simply as the man behind the catchphrase “Here’s Johnny,” or as the Human Laugh Machine because of his oft-imitated guffaws at Carson’s jokes. Though he played the straight man (and butt of many jokes) to Carson’s witty wise-cracking host, he was in many ways more of an innovator than his more recognized and feted colleague.

Ed McMahon, in short, is in many ways the common thread for such reality shows as “American Idol,” “America’s Got Talent,” and Punk’d,” in that he did it first (and arguably better). In the Eighties, he was not just Johnny’s loyal foil but a host in his own right, helming the shows “Star Search” and “TV’s Bloopers and Practical Jokes.” You can argue about the relative merits of each show (such as whether any real “stars” were discovered or whether already known “stars” like Connie Selleca and Corbin Bernson merited ridicule), but Ed McMahon helped make such formats popular again for television audiences. It’s hard to say that there’s a direct line between Ed and Susan Boyle or Ashton Kutcher, but the debt is hard to miss.

Of course, all of this is dwarfed by his considerable tenure on the “Tonight Show,” thirty years during which his unmistakable voice ushered us in to the national conversation piece that was Johnny’s monologue. That’s a hell of a run in any business, and it’s fair to say that Ed set the template for TV talk show sidekicks to come. One always had to be deferential to the host (after all, that was the main name on the paychecks), but able to tweak his nose in whatever foible or slip-up might occur during a given night’s taping. A sidekick could be wacky, but not so much that he overshadowed the host. Above all, he had to be able to relate to the host and add to the show so much more than just the announcement of who was on that episode. In all of those categories and more, Ed McMahon succeeded.

My own memories of the “Tonight Show” are hazy ones, from the Eighties and early Nineties before Jay Leno took over and made the show just as popular if slightly dumber. I remember the thrill of being allowed to stay up late on rare occasions, just so I could see what Johnny would say about the latest scandals or news stories (of course, any jokes about Ollie North or Saddam Hussein now seem as dated as Johnny’s wardrobe). And always there would be Ed at his side, laughing even at the terrible jokes with an enthusiasm that would be mistaken as desperate brown-nosing were it anyone else. But you always felt like Ed got a kick out of the joke simply because he was a jovial kind of guy (of course I didn’t know at the time that Ed was something of a drunk; everything’s hilarious when you’ve kicked back a few before show-time, I guess).

What’s amazing to me, as the years go on, is how Ed’s reputation as a generous and good-hearted man has not suffered the slings and arrows of sudden revelations that, say, he pushed small children down flights of stairs or shut out those with whom he argued over the years. Johnny’s reputation in public as a witty host has been offset by the fact that he could be cold and impersonal in private, which might be understandable if it was developed as a shield against the intrusiveness of people who see you night after night and think that you must be the same person that you play on TV. Fame probably changed Carson into a SOB, but it never had that effect on McMahon. By all accounts he remained as jovial and easy-to-please off camera as he was on.

Ed McMahon wasn’t just a sidekick to Johnny, of course; for years he helped co-host Jerry Lewis’ annual Labor Day telethon to raise money for kids with muscular dystrophy. Ed served as a calming counterpoint to the frequently manic Lewis, whose shtick was old in 1956. I have a feeling that Ed might have wanted that legacy to get as much mention as his tenure with Johnny. 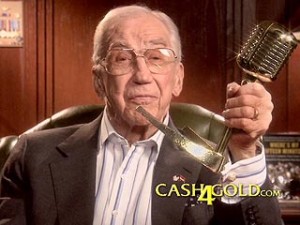 Of course, the sad course of events in Ed’s last years bears mentioning: the health problems and money worries that contributed to the loss of his home are the stuff of tabloid legend. No doubt these issues contributed to his demise at the age of 86, but I’d hope that they didn’t beat him down or cause him to rethink his approach to life. Donald Trump offered to buy Ed’s house to help him keep it, which shows that the Donald isn’t quite as hard-hearted as his public persona suggests. So hopefully when McMahon uttered his last “Hi-Yo” on this earth, it was not in resignation but in consideration of a life well spent.

Ed McMahon is a tough act to follow; only Dave Letterman’s band leader Paul Schaffer continues in the vein of the frantic kiss-ass sidekick, and I think he does it more ironically than Ed could ever have mustered. Andy Richter has taken over for Conan O’Brien’s tenure, and he’s more in league with his host than opposed to him as a sober (relatively speaking) straight man. But whoever else comes along in the world of showbiz sidekicks will never really trump the man who set up the model. Ed McMahon never aspired to outshine his comedic partner, and in the end he leaves a legacy to be proud of.