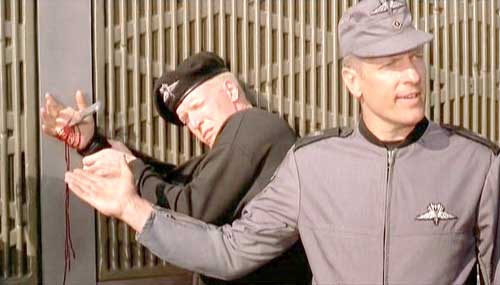 "The enemy cannot push a button if you disable his hand."

The noumenal pop culture Sergeant is rough, unrefined and no-nonsense, with the practical experience, tenacity and mental toughness to get the job done, and to force others to shape up or ship out. He is an authority figure by virtue of effectiveness and personality, not by virtue of commission. In coming-of-age stories (I love excuses to use the word Bildungsroman), the sergeant guards the bridge from childhood to adulthood, from passivity to activity, from responding to the world to affecting it, from a universe that nursed and raised you to a universe that is not interested in coddling you — and, more often than not, wants you dead.

No Sergeant more thoroughly pushes this concept to its limit, no actor more distills this archetype, than Clancy Brown — the Kurgan from Highlander — as Sergeant Zim in the underrated Van Dien / Verhoeven schlockfest Starship Troopers. 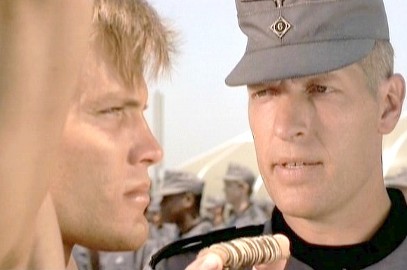 Everything visceral notion that drives Starship Troopers from its inauspicious beginning to its carnivalesque conclusion is distilled, then exploded. It is extreme melodrama. You don’t just lose your girlfriend — you lose her while facing down a messy death in a war of mutual genocide that killed your family and destroyed your homeland, that you are only in because of her in the first place, via a video message that you watch humiliatingly, in a public place in front of all your friends and coworkers — and you lose it to your cross-town football rival from high school, who glories in rubbing it in your face. (And he doesn’t just get his comeuppance, he gets his brains sucked out in front of your ex by a superintelligent alien insect).

Sergeant Zim doesn’t just test you. First, he snaps the arm of the strongest guy in your platoon. Second, he chokes out a teenage girl with his knee on her throat. He gives kickass speeches that resound with rage and the prospect of death. He puts you through drills and exercises that kill several of your friends, and he makes sure you know damned well that their deaths are your fault. And, in one of my favorite moments in movies, he teaches a lesson (sort of) about interstellar warfare by impaling Gary Busey’s son’s hand with a throwing knife. And who hasn’t dreamed of doing that one of these days?

There’s little texture to it — no regret, no contrapasso. This is all for your own good, as you must know — as, in this sort of artistic project, must be true. He is the cruelest of gateways into the cruelest of worlds, and you love him for it. Then, at the end, he comes back and does what no one else can do. Unlike many Sergeants, he gets his own chance to save the day — to prove the validity of his own lessons with his own hands.

Verhoeven is a master of his own breed of contemporary counterpoint to the Platonic form — a messy, meaty symbolic character who at once epitomizes an idea and locates it firmly in the material world, with no hope of Cartesian elevation. 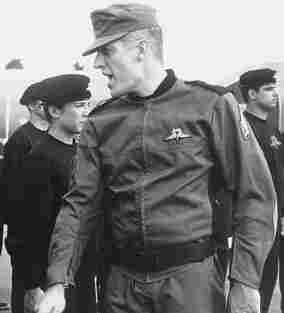 And Sgt. Zim, the product of great acting, great directing, and hilarious and awesome writing, is one of the best examples of this work, and, as far as I’m concerned, the greatest fulfillment of this role in pop culture.