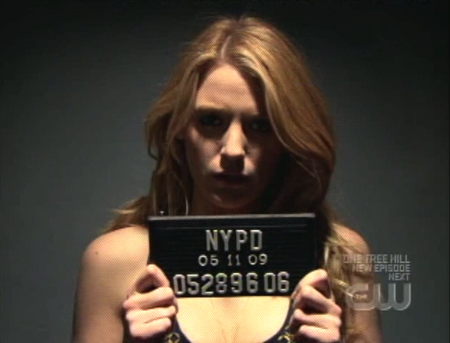 Back in the fall, Wrather wrote an excellent series of posts on Gossip Girl in which he analyzed the  literary, psychological, cultural, and socioeconomic aspects of the teen soap opera.  However, six episodes into season, it seemed that the show’s second season was going to be a huge disappointment  and that the exploits of Serena, Blair, Chuck and company were simply not deserving of that level of scrutiny.  As a result, the project fell by the wayside.  Since then, the series has not only supplied ample guilty pleasures (including girls going wild, drunken rooftop-ledge shouting matches, and illicit teacher-student affairs), but has also provided substantial food for (over)thought,  most recently on the philosophical bases of punishment and the relationship between the police power of the state and economic elites.

Of course, this is Gossip Girl, not a political theory textbook, so these philosophical and sociological ideas are embedded in plotlines that focus on a variety of  romantic entanglements, scandalous revelations, and boatloads of deceit and double-crossing.  The latest batch of melodrama, which came to a head in last week’s episode, revolves around the revelation that Serena’s new boyfriend, Gabriel, and new best friend, Poppy Lifton, are not the southern Tobacco heir and socialite that they purport to be, but are actually con artists whose aim was to rope Serena’s mother Lily and the other multi-millionaires of the Upper East Side into a Madoff-esque Ponzi scheme.

Once Serena learns that Poppy is the mastermind of the operation, having grabbed all of the money and left Gabriel in the lurch, she and Lily disagree strongly about the wisest course of action. Serena wants to enlist Chuck and Blair in an elaborate operation to catch and humiliate the Poppy, whereas Lily wants to just pay off the other investors out of her own fortune to avoid a public scandal.  When Serena goes forward with her plan, Lily calls the cops with the false report that Serena has stolen a piece of jewelry from her, scuttling the revenge plot and allowing Poppy Lifton to flee the scene.

On the surface, the conflict between Serena and Lily appears to be a dispute between deontological and consequentialist theories of crime and punishment, with mother and daughter disagreeing about whether  the right course of action is to ensure that the grifters get the punishment that they deserve or whether the desire for retribution should be secondary to the rational calculation of whether or not punishing Poppy causes more harm than good.  Throughout the episode, Serena is a stubborn retributivist (unknowingly carrying on the tradition of Kant and Hegel), constantly asserting that to let Poppy Lifton escape would be fundamentally unjust and that the morally right course of action is not only to punish her but to actively collect evidience that  proves her guilt.   In contrast, Lily is much more of a utilitarian than her daughter; she argues that the costs to the family’s reputation and Serena’s future are too great to make punishing Poppy worthwhile and that the better course of action is to let Poppy escape and just pretend that they were never conned.

However, there is also a fundamental similarity between Serena and Lily’s actions in this episode– both ultimately use the language of justice and the related institutional arms of the state to pursue private aims.  Serena and company  were prepared to call in the police to arrest (and, in the process, humiliate) Poppy Lifton after they had recorded her conning a new mark, but Lilly trumped this by using the NYPD to prevent Serena from executing the counter-con. Although they were working at cross-purposes, both plans are rooted in the premise that the police are not be autonomous arm of the state so much as they are a tool that the wealthy can use as they see fit.

Viewed in this way, the disagreement between Serena and Lily is more a matter of differing time horizons than opposing value systems. Serena (and the other Gossip Kids) typically care only about short-term vengance; their scheme to con the con-artist (much like most other Blair/Chuck-driven schemes) is  an aristocratic duel in which the weapons are cell phones rather than pistols . In contrast, Lily’s restraint stems not from adherence to a competing moral code, but rather from a different frame of reference; rather than caring about avenging one particular wrong, her focus is on protecting Serena’s future and the family’s reputation.  Last night’s 80s flashback episode (and spinoff pilot) revealed that she didn’t always behave in this way; when she was a teenager, Lily was as myopic as Serena, whereas her mother was the one concerned with protecting the family’s reputation and social standing.

5 Comments on “Justice is Blonde: Theories of Crime and Punishment in Gossip Girl”