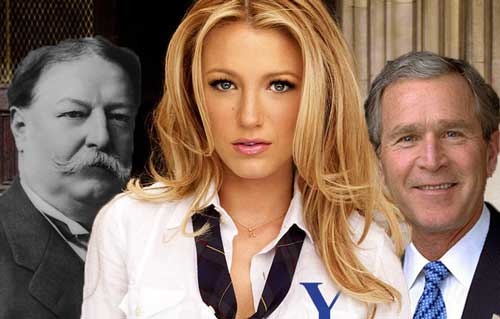 Though exteriors were actually shot at Columbia in Harlem (which, admittedly, seems farther away from the show’s fantasy upper east side than charming and quaint little Connecticut is), the characters were headed for a weekend of schmoozing and partying at that most telegenic of Ivies, Yale.

(Full disclosure: All of this blog’s writers met as classmates at that very college.)

So how does a real Yalie find his alma mater’s Gossip-ified TV depection? (Hint: less realistic than it’s Gilmore-ified version.) Read on to find out.

Well, let’s Overthink it. It won’t surprise readers of this series that Gossip Girl treats higher education as a luxury good, an indicator of status to be acquired and trafficked in. Yale is like it’s own secret societies in macrocosm (the B-plot involves Chuck trying to get into “The Skull and Bones.”)

What is surprising is that the school’s officials are doing the same way. They — a tweedy dean, a lady professor who inexplicably talks in French at cocktail parties — are presented as being foremost stewards of the brand.

The episode’s conflict between Blair, who has dreamed of Yale her whole life, and Serena, who receives an inexplicable personal invitation to tour the college, hinges on the administrators’ attempts to change the schools “stuffy” image. (For non-viewers, Serena being invited to Yale is roughly the equivalent of Paris Hilton being invited to Yale.

So how do you gain entrance to this club? If you have to ask, you’ll never know. As Chuck says of The Skull and Bones, “You don’t find them; they find you.” That is to say, admission to the upper class is based on intrinsic worth.

It’s not unusual for shows like this to ignore a school’s function as, um, a school. It’s a MacGuffin, a contrivance to forward the plot, important to our characters solely because it’s What They Want.

And the precise method of ignoring the education part of education is derision. Classes — two are mentioned: “The Role of Sex in Art” (hint: large) and “Great Hoaxes in Archetecture” — and indeed liberal education in general is mocked as being not merely irrelevant but laughable, useless and stubbornly proud of its uselessness.

This is not simply of a piece with the ethos of the show, is part of a larger cultural trend in America, a trend that the show speaks to, and that I’ve been trying to hint at in these quixotic attempts to set down via blog my fascination with Gossip Girl.

The American Dream is changing. Or, more precisely, the terms on which we ant to acheive the American Dream was chaing. We want a Super Sweet 16. We think we could win American Idol. We want to be discovered and elevated. And, crucially, we want this at no cost or inconvenience to ourselves, as though Cinderella could forego the evil stepmother and go straight to the ball and the prince.

But there have always been jerks with an inflated sense of their own worth. They go to Harvard. (Sorry. Had to get one in there. I kid, I kid.) What’s different here?

The difference, I think, is that there are billions of film, TV, and advertising dollars spent trying to convince us that the dream is realistic, or that it would be if we simply by X product. (This kind of self-worth is a house built on sand, a fact which marketers know and exploit.)

And we’re getting ’em younger and younger. The c-plot involves Jenny dropping out of school to work full-time for Eleanor’s fashion line. (Repeated uses of the word “atelier.”)

Apparently, dumb is the new smart. I should go tell this to the President. Over a beer.

11 Comments on “For God, for Country, and for Gossip Girl”