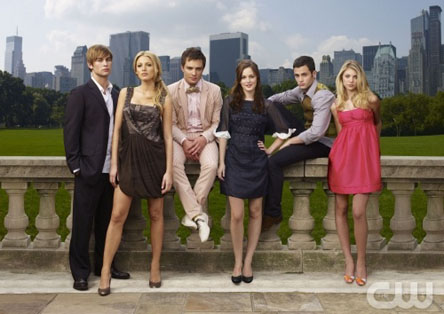 Let me tell you about the very rich. They are different from you and me. They possess and enjoy early, and it does something to them, makes them soft where we are hard, and cynical where we are trustful, in a way that, unless you were born rich, it is very difficult to understand. They think, deep in their hearts, that they are better than we are because we had to discover the compensations and refuges of life for ourselves.

This passage is probably the source of the supposed exchange between Fitzgerald and Hemingway. (F. Scott: “The rich are not like you and me.” Ernest: “Yes. They have more money.”)

I wonder what the author of Gatsby would think of Gossip Girl, whose second season bowed last night on the chronically under-performing CW network. I guess money and scantily clad young things don’t pull viewers like it used to, though we would be mistaken to take this as encouraging evidence about the taste of the American public.

Or maybe Hemingway’s (alas, apocryphal) ironic comment is the more revealing here. By seeming to misunderstand Fitzgerald’s point, he suggests that he doesn’t have one.

I think that Gossip Girl is, at bottom not a show about money at all (though money has a great deal to do with its deeper significance). Mild spoilers and spicy overthinking after the jump. And yes, I am going to make this a weekly series.

We’re back in at the end of the summer following Season 1. The plot is standard teen soap opera stuff. Musical beds, adultery, adolescent angst, absent parents. (The one father on offer left his kids home for the summer to, um, tour the country with his band — they were big in the 90s and are friends with Lisa Loeb — and the one grandparent is a plot device. I think it’s important that this show is about high school, and I’ll take the subject up in the future.)

It’s pretty tired, and without the knowing winks at its own baldfaced and cynical adherence to formula which pervaded its predecessor The O.C. (or the first few brilliant seasons of Dawson’s Creek), it seems actually innefectual. I mean, if you purport to be setting out to titilate and shock (as your ad campagin gives every indication that you do), give me something actually titilating or shocking.

Of course the actual drama is in the conspicuous consumption on display. Each act’s establishing montage — one of expensive stately homes, one of designer shops in the Hamptons, one of the beach, etc. — packs more energy and visual punch than the remainder of the episode (aka the plot) taken together, and their intercuting with a buffet of nubile flesh underscores the funciton of these images not as status symbols but as fetish objects (of both the sexual and commodity varities of fetishism). They’re substitutes, and they mask an underlying desire or social relationship.

Put another way: Freud wrote that money never makes anybody happy because money is not the sort of thing that can make a very small child happy. He meant that money is a substitute gratification, a never-quite-satisfactory stand-in for what we actually want.

I think the show’s relationship to money, though, is more like Van Helsing‘s relationship to gothic horror. It’s a mix-tape, a greatest hits album, more akin to the experience of leafing through Architectural Digest in the doctor’s office than to, say, that of touring Buckingham Palace.

See, we can hardly imagine the characters on display actually belonging to the environments they inhabit. Fitzgerald’s point — lacking any experience of “early” deprivation, the rich become inured to certain pleasures and contemptuous of those for whom life’s pleasures are hard won — would be lost on the characters in Gossip Girl.

The closest thing to class-based contempt we get is Serena being a bitch about her townie date’s boorish manners (he honks from the driveway instead of knocking at the door) and chevy Camaro (she finds it declassé because, and this is telling, its posession is insufficiently ironic). But Blair’s simpering goodbye to Chuck (who can’t bring himself to say “I love you”) or Serena’s simpering embrace of Dan (who probably says it all too often) belong to romantic melodrama, not to the eternal struggle of class against class.

I’ll break off here to answer the objections I hear brewing: I know, I know, what the hell am I talking about? It’s a soap; it should function like a soap. Melodrama is par for the course. But the interesting thing about this show is what Robert Forst called ulteriority — the gap between what a work of art is and what it purports to be.

I’ll also take the break to remark that I’m concentrating solely on the women — excuse me, girls — in the story. There are two reasons: One, the boys are written like kids in a candy shop, and when they’re not ogling (or fondling) boobies, they’ll wondering when they’ll have their next chance to.

The tragedy, I think, is ultimately that of a society that tells us to worship certain attainments but gives us no path to attain them. I have been curious, recently, to see the unchecked rise of the most crass forms of materialism on TV. MTV is largely responsible, but Laguna Beach and The Hills and My Super Sweet Sixteen are just the vanguard of a larger cultural movement.

Aaron Sorkin had Jed Bartlet say that the problem with the American Dream is that we all think we’re going to be rich one day. I think we can be forgiven our mistake if we are bombarded with images of things we are instructed to desire, to fetishize, but will likely never possess.

What TV offers, however, is the brief illusion that we do posses them. They’re in our living room, after all, and we are intimately related to them. I wonder if TV, which is after all one of our lives’ readily available “compensations and refuges”, is really capable of depicting wealth and its effects in the way that film or the novel can.

In other words, the rich are, in fact, not like you and me. You just won’t see them on Gossip Girl.

4 Comments on “Gossip Girl Season 2 Begins: The Rich Are Just Like You and Me”