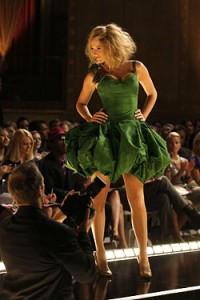 The last episode of Gossip Girl continued the show’s return to form, and thankfully contained various acts of wanton cruelty.

try to humiliate her best friend, crush an innocent underclassman, thwart her mother’s crucial fashion show not once, not twice, but three times

We can debate (and they do) whether any of her assorted misdeeds was effective at getting her friend back, a point I’ll take up later. But we don’t need to argue about her motivation: her best friend has rejected her and her mother is neglecting her in favor of a younger, blonder, protegé.

This is actually a hallmark of Blair’s character, and of one style of drawing a character in general: Psychological transparency. Her motivations are intelligible, and her actions are related to them in a straightforward way.

On the other hand, there’s Chuck, whose relationship to his motivation changes in this episode. A brief examination of how will shed light on how the show is written, and what it means to write (and read) a character.

Previously Chuck’s the motivations had been inscrutable. It was vaguely clear that he wanted to bring about Serena’s re-ascendancy in order to get Blair — maybe if she was dethroned, she’d turn to him for help being even more Machiavellian. But why would he want Blair in the first place? She’s a queen bee, but Chuck, who rejects the norms of any social order, surely ought to reject this enticement.

Why does he take Dan out for two nights in a row? Amusement, as he states? No way. Nobody could be less amusing than that loser. It’s a mystery.

The problem with Blair’s psychological transparency is that it situates her actions within a discourse about effectiveness. She is handing us criteria by which to judge her. Set aside the fact that her motivations are stupid. (She wants mommy to pay attention? Please.) Because we know what she’s trying to achieve, the fact that she doesn’t achieve it is a mark against her. And the fact that her strategies are so ill-chosen — I mean, isn’t this girl supposed to be pulling all the strings? — makes her seem like a petulant, spurned child, blindly throwing a tantrum.

The inscrutability of Chuck’s motivations (again, up until this episode) added to his allure, because it made him impossible to judge, at least on any terms he’s willing to grant us — as opposed to say, morally, by which standard he’s a jerk. There was a constant deferral of judgment, a missing piece of information that was necessary to forming a complete picture of him. This kept us involved with the character and, they should hope, kept us watching.

This is why it was such a mistake to spill the beans about Chuck’s dead mother. It flattens him out, makes him seem two dimensional and schematic like Blair. By giving him a soap-opera backstory (have I mentioned that I hate backstory?), it makes the front story much less compelling.

But there’s still hope, I think: really none of Chuck’s schemes seems well-calculated to ingratiate himself with Bart Bass. (He’d have an easier time ingratiating himself with Lance Bass… speaking of which, the show really dropped the ball on the gay sub-plot, huh?)