But there’s another possibility–maybe the Academy’s been consistent in rewarding quality work, but the public is becoming less and less willing to see it. The rise of VHS, DVD, and HDTV has definitely changed our viewing habits, skewing the box office towards blockbusters and other event pictures. With tickets pushing $13 in some places, people are going to the movies less, and they’re more likely to catch the smaller, indie films on video. So maybe when we’re looking at these charts, what we’re actually seeing is the moviegoing public gradually becoming less likely to shell out for a ticket unless the film contains explosions. 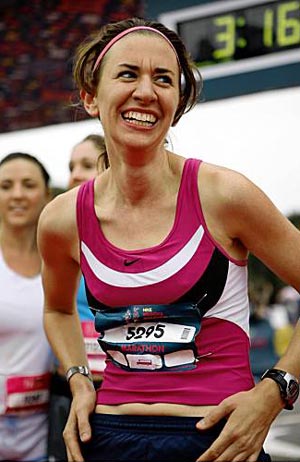 But personally, I do think the Academy has become more highbrow. They could have easily recognized The Dark Knight and/or Wall-E, which were both widely hailed as two of the greatest pieces of pop-art ever. But they went with the exact kind of films you’d expect to be nominated: “Prestige Pictures,” which probably only got greenlit in the first place because the producers thought they sounded like the kind of movies the Academy loves.  Popcorn films, no matter how good, need not apply. I’m reminded of last fall’s San Francisco marathon. 24-year-old Arien O’Connell had the fastest women’s time of the day, finishing the race in 2:55:11. But she didn’t win. Arien hadn’t entered in the “elite” group of marathoners, and so she wasn’t eligible for awards, even though she’d crushed the official trophy winner by eleven minutes.

So here’s my question for you readers who have made it this far: why? Not why did you make it this far–why has the Academy been nominating less popular movies? Is it because studios are spending more money campaigning for those nominations? But The Dark Knight and Wall-E had giant ads in Variety too. Do the voters, all Hollywood insiders, have a narcisstic impulse to see Hollywood as a place where they make Serious Art about Important Things? (“We’re the ones who talk about AIDS when it was just being whispered, and we talked about civil rights when it wasn’t really popular.“) But then how come the trend has emerged only in the past decade?

We’ll discuss it during our special Oscar podcast this Sunday, and we’ll try and mention your theories.

And as promised, here’s the spreadsheet, for those of you who want to crunch the numbers for yourself.