There seems to be a consensus that the Oscars are becoming less and less populist. Back in the day, movies like Star Wars, Tootsie, Ghost, and E.T. were all nominated for Best Picture. This year, a lot of people haven’t seen a single one of the nominees. The Oscars have gone all snooty on us. But here’s my question: can “snooty” be quantified? Can we graph the Academy’s turn towards art house?

(NOTE: This post would not be possible without the badassery of sheely, whose day job involves all sorts of numerical kung fu.)

The most obvious way to measure popularity is by looking at domestic box office. So I went to Box Office Mojo and found the grosses of all the Best Picture winners back to 1980 (the earliest year available). I adjusted the numbers for inflation using this calculator and plotted the results. (NOTE: The most recent year the inflation calculator could handle was 2007, so I’m using 2007 dollars. But don’t worry – my spreadsheet will be available for download at the end, so you Excel junkies out there will have something to do in your free time.) 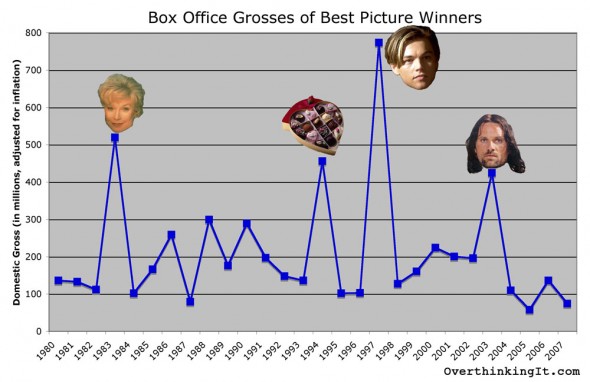 The four big spikes are Return of the King, Titanic, Forrest Gump, and Terms of Endearment. Yeah, that last one surprised me too, but it turns out that adjusted for inflation, the Shirley MacLaine weepy outgrossed Gump. It’s hard to a see trendline, but the 2005 and 2007 winners (Crash and No Country) are the two lowest on the chart. In fact, Crash is  the lowest grossing Best Picture winner ever (accounting for inflation, of course).

Now, let’s take all the BP nominees and find the average gross for each year. 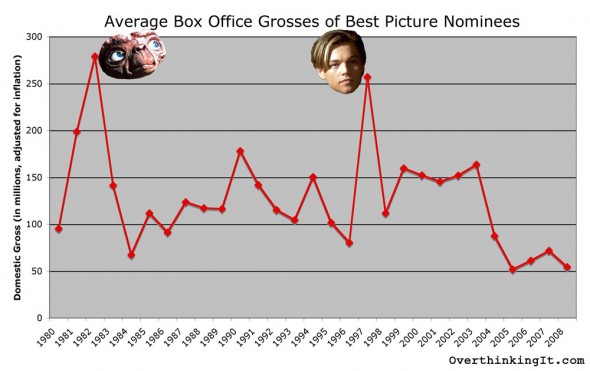 First, notice I’m including this year’s nominees. This is a sneaky and dangerous thing for me to do, since all five of them are still in theaters, racking up money, so that dot will move higher. Maybe just a little higher. But maybe high enough so that the dots for the past four years will eventually make a pretty line showing the Academy has actually moved back towards populism. But for now, just ignore that last dot. Cover it up with your finger if you have to.

Okay, this chart is definitely less spikey than the one of just the winners. The two big peaks here are E.T. and Titanic (again). (Speaking of E.T., I’m using only the grosses from these movies’ original theatrical releases.) But if you ignore those peaks, you can see the Oscars trending steadily upwards for 20 years, then crashing in ’04 and ’05, and then (maybe) starting to climb again. However, total Hollywood grosses also trended upwards over the past 20 years, so it’s possible that higher grosses over this time period just reflects something that was going on industrywide, not an Oscar thing specifically.

But maybe graphing the money is a mistake. Titanic made almost twice what Forrest Gump did, but does that mean the Oscars were twice as populist the year Titanic won? Both Titanic and Gump were the number one movies of their years, so maybe we need a system that rates those two films as equally popular.