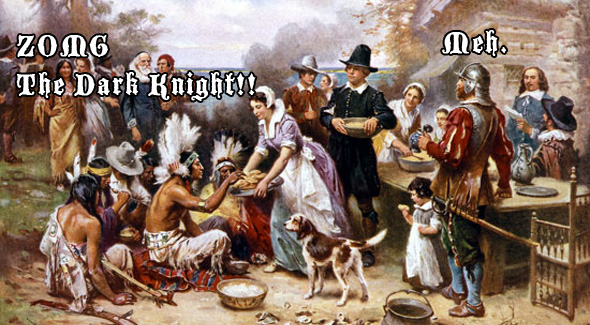 Appetizers: Dark, moody, cerebral blockbusters, otherwise known as the “Nolanization” of franchises such as James Bond and Batman.

When we last touched on this topic, there was some debate as to whether or not this trend is a good thing. Discussion that enfolded in that posts’ comments was more focused on the finer points of this trend, which is why I feel like this new paradigm has passed into “taken for granted” territory.

So in case anyone needed a reminder as to why we should be thankful for this trend:

Exhibit 1B: Batman Begins: Batman interrogates the Scarecrow. Gives me chills, in a different kind of way.

Exhibit 2A: Die Another Day: Laser fight scene. Perhaps on the cutting edge then.

Joel Schumaker’s apology for Batman and Robin ends with an interesting line: “My intention was just to entertain.” How inadequate those words sound now! We expect our blockbusters not just to entertain us; they must make us cringe at their edginess and think about their deep philosophical implications as well. Now that the Bond and Batman franchises have two films in their current iterations, let’s not take the progress made by these franchises, and by blockbusters in general, for granted. Be thankful–before they go down the toilet again.

Main Course: Chinese Democracy (the G’n’R album, not the aspirations of the Kuomintang)

Most reviewers, after recovering from the mind-blowing fact that they’re actually reviewing this album, gave it lukewarm marks. The consensus seems to be that there’s a lot of things to like, but it’s overwrought with 14 years worth of overproduction and nowhere near the work of staggering genius that Axl Rose seemed to promise. I’m listening to it now, and I pretty much agree. But I still think that we’re taking the release of this album for granted.

Let me put it this way: Thank God Axl was able to let go of the studio dials and finish this thing off. He saved himself from becoming that guy in Synecdoche, New York, who [SPOILER ALERT] endlessly tools with his work of theatrical genius until the apocalypse and his own death stop him short. And he saved you from a lifetime’s worth of speculation. 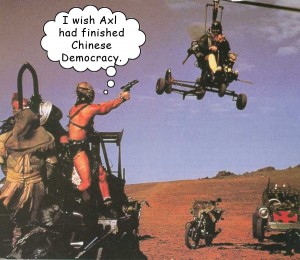 Fortunately, this will not have to be a part of our apocalyptic future.

Imagine if, thirty years from now, when global warming and war with Iran have obliterated our current way of life, you stop to think about the cultural achievements of the late 20th and early 21st centuries and realize that Axl died while trying to finish Chinese Democracy.  You’ll wonder that maybe, just maybe, Axl really could have released the most incredible musical creation of all time with just a few more years of work. Wouldn’t that be sad? Instead, thirty years from now, in the apocalypse, you won’t have to ponder such things. Chinese Democracy will just be another disappointing comeback album that you deleted from your iPod after a couple of weeks of trying to rationalize the 90 megabytes of space that it took up. You’ll be able to ponder more important things, like scavenging for food and avoiding highway bandits. For that, you should be thankful.

As we now know, Sarah Palin proved to be a disastrous running mate pick for John McCain. Her own performance in interviews, Tina Fey’s lampooning of them on SNL, and the $150,000 clothing bill made her the laughing stock of the political world, alienated moderates, and may have cost McCain the presidency. We should not take this all for granted. Remember those harrowing days after her performance at the Republican National Convention, when the McCain-Palin ticket’s poll numbers were riding high and it seemed like this “fresh new face” would ride a wave of fervent GOP-base support to the White House? When the Democratic Party looked like it was going to snatch defeat from the jaws of victory yet again?  All of that was the case in September, before Palin’s blunders (and some market fluctuations) brought America to its senses.

Now that all of this is behind us, let’s not forget to be thankful for Sarah Palin for turning out to be far less of a political force that we once feared she might become and for inspiring so much wonderful satire along the way. Also, even after she’s left the national spotlight, she still manages to entertain us, this time by doing an interview in front of a turkey slaughter house after giving the governor’s official pardon to a Thanksgiving turkey:

Bonus Leftovers: The Internet (and Robocop on a Unicorn)

If you think you don’t take the Internet for granted, you’re lying to yourself. Let me just remind you briefly that the Internet has changed lives in ways too numerous to list, that none of this was imaginable just fifteen or so years ago, and that we don’t think twice about any of this in any of the dozens of times we access the Internet every day.

The Internet has made this site possible, and for that I am truly thankful.

The Internet is also how I came to learn about Robocop on a Unicorn, and for that I am truly thankful. 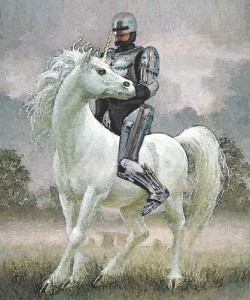 Once you’ve recovered from your food coma, let us know in the comments which forms of popular culture you think get taken for granted. We’ll give thanks for those too.