I know you’ve all been waiting for this for a long time — here, finally, in all its glory, is my review of Chinese Democracy.

Three things that I can say about Chinese Democracy — it’s controversial, it’s historic, and it’s neither as good as the fanatics say nor as bad as the detractors insist.

For the full review, read on… 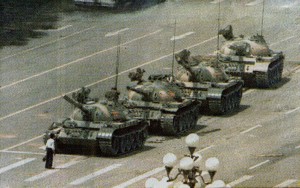 Yup. We meant it literally.

The first thing a serious reviewer needs to consider before reviewing Chinese Democracy is whether to approach it from the political and philosophical standpoint of One China. When Chiang Kai-shek and the Kuomintang fled to the island of Taiwan during the civil war with the Communists, did they found a new country, did they bring a new national character to an existing entity, or did they simply establish an alternative locus of power within the larger entity of China? To what extent does China exist a priori? And then, further, to what extent does it exist independently of the recognition, legitimacy and validation that comes from its status in international regulatory bodies?

I would argue that there is a cultural idea of China that exists independently and parallel to the political entity of China, and that, as such, the One China policy must be considered coeval with and not to the exclusion of the recognition of Taiwan as an independent nation.

THE REMAINDER OF THIS ARTICLE HAS BEEN CENSORED BY THE PEOPLE’S REPUBLIC OF CHINA, AND THE AUTHOR HAS BEEN EXECUTED BY THE EDITORIAL BOARD OF ROLLING STONE MAGAZINE. WE APOLOGIZE FOR ANY INCONVENIENCE

If you actually want a review of the Guns ‘n’ Roses album, here’s a good one.

Or read more from… Featured, Music, Politics, can you see where this is going?, unnecessary literalism