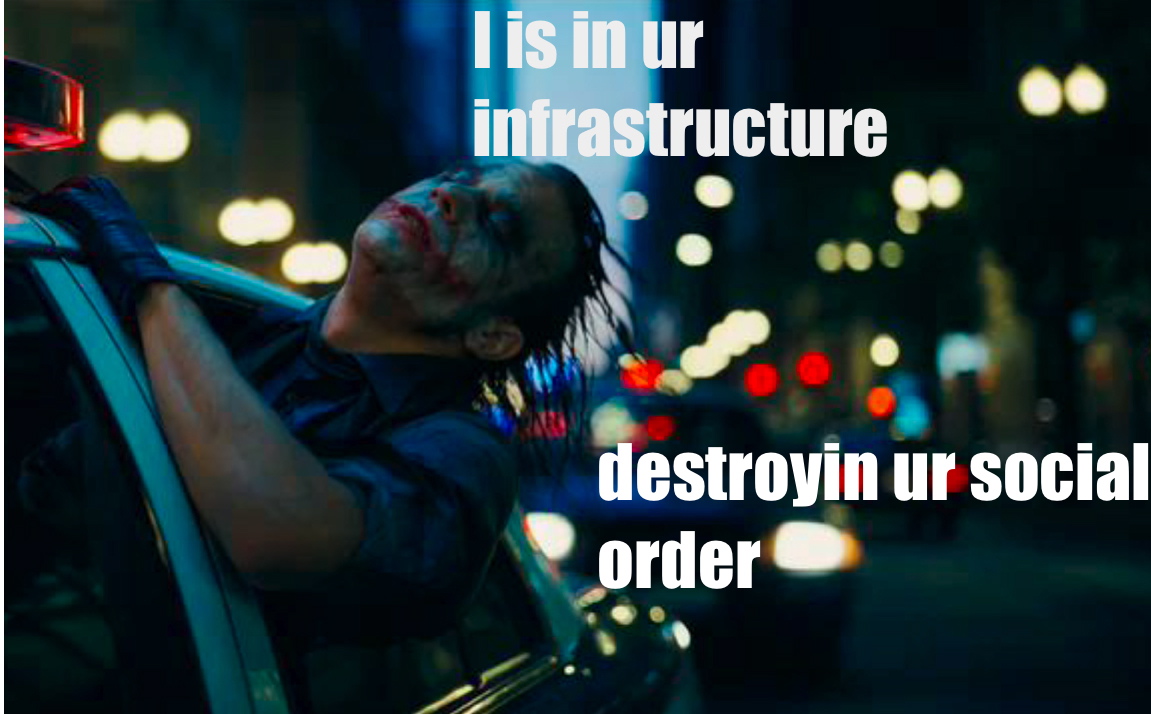 Over the past two weeks, much digital ink has been spilled about the political meanings and messages embedded in The Dark Knight. In this particular corner of the intertubes, considerable (over)thought has gone into dissecting the layers of philosophy in the film. However, looking closely at the intersection of the two reveals that the filmmakers pose some very important questions that probe the very nature and origins of social and political order.

No spoilers here, so read on, even if you haven’t seen the film yet.

Words only after the jump, so if you’re just here for the LOLJoker, read no further…

Got a loljoker of your own? Email it to sheely AT overthinkingit DOT com before Sunday, August 3, 2008 at Midnight EDT. The best one wins a vintage batman t-shirt, and we’ll invite you onto the OTI Podcast to overthink some stuff with is. Rules and guidelines »

If All Men Were Batmen, Would Government Be Necessary?

In Federalist Paper #51, James Madison articulated one of the fundamental challenges in the design of political institutions:

In framing a government which is to be administered by men over men, the great difficulty lies in this: you must first enable the government to control the governed; and in the next place oblige it to control itself.

This observation, which was used by Madison to argue for the necessity of checks and balances in the crafting of the United States constitution, has been reframed by Political Scientists as a central paradox in the study of the state: any government strong enough to enforce laws is also strong enough to break those laws. Thus, these researchers turn Madison’s normative prescription into an empirical question: under what circumstances will institutions that generate political accountability emerge?

Although droves of grad students are fanning out across the globe gathering more and more evidence to answer this question, many seem to assume that the industrialized democratic nations have solved this problem. The world of TDK turns this logic on its head, portraying an all too plausible picture of a failed state right in the middle of a major American city; it is essentially a more stylized version of the same thing the Wire has been trying to tell us for the past six years.

Viewed in this way, the emergence of Batman in Gotham fits right in with real world examples of vigilantism in settings as diverse as the 19th century American West, Columbia, Kenya, and Iraq; in the absence of state capacity, other specialists in violence have an incentive to respond to the demand for public order. It is also not terribly surprising for such a vigilante to be a lone billionaire. A long line of research tracing back to Mancur Olsen’s The Logic of Collective Action argues that public goods, such as security, will be underprovided by rational individuals. That is, if your neighbors are organizing a community watch, you’re better off staying at home and watching Project Runway while they patrol than spending your time (and risking your ass) helping them. Although more and more researchers are providing examples of communities that are able to solve these free-rider problems in novel ways (more on this in the conclusion), a classic way to solve the problem of public goods underprovision is for one individual to bear the costs.

However, Batman’s particular way of providing security doesn’t necessarily solve Madison’s Dilemma; although all Gothamites can benefit from the positive aspects of Batman’s actions, this also means that they are also vulnerable to the negative. As Fenzel and many of the commenters have all noted, Batman’s actions are accompanied by numerous deleterious side-effects, most notably, The Joker.

The type of state failure depicted in TDK is a different beast from what we have observed in cases such as Somalia and Sierra Leone. The problem with Gotham is not that it lacks the infrastructure necessary to enforce laws and provide public goods, but rather that these institutions are so rotten that they can be easily hijacked by the Joker to put his large-scale Rube Goldberg machine of a plan into action. Nearly all of the public institutions that we take for granted as part of urban life-including school busses, the police, public transit, and hospitals – play an integral part in the execution of his scheme. The very instruments of government that were designed to serve and protect Gotham’s citizens are turned into weapons against them. In this way we can read the Joker as Madison’s evil twin; each of his acts of public violence underscore the fact that men are emphatically not angels. Harvey Dent’s transformation from valiant crusader into violent creep hammers home the point that good people are no substitute for good institutions.

In the end, TDK doesn’t definitively answer the question of how Gotham will solve Madison’s Dilemma, but hints of it can be seen in the Ferry Bomb/Prisoners’ Dilemma scene. Although John Nash and his Beautiful Equilibrium would expect both boats to explode, they don’t. Mlawski attributes this to idealism, but an alternative explanation can be found in research on repeated prisoners dilemma games. In particular, groundbreaking experimental work by Political Scientist Robert Axelrod has shown that when individuals play Prisoners’ Dilemma games over and over again with the same partners, cooperating (remaining silent/not blowing each other up) is a stable equilibrium. This finding is not dependent on altruism, but rather on the fact that individuals realize that if they cheat their partner in one round, they will be punished in future rounds.

Although the “Ferry Bomb Game” itself doesn’t really have “future rounds” (if you blow up, its all over), it is possible to see the more general logic of Axelrod’s argument in the long-lasting relationships that are a central part of healthy neighborhoods and communities. In this way, strengthening social ties instead of perfecting government institutions could potentially solve Gotham’s governance problems. If Nolan and company take the next film in this direction, it may or may not be great cinema, but it will almost certainly be groundbreaking social science.

This is the third post in the Philosophy of Batman series. When you’re done, check out Part I, Part II, and Part IV .

9 Comments on “The Philosophy of Batman: Political Sociology Edition”