(There Will Be Spoilers)

Christopher Nolan didn’t major in philosophy in college (or “read philosophy at University,” as the case may be), but he evidently has some familiarity with the subject.  How do I know?  Well, both of his two Batman films thus far have featured famous philosophical thought experiments.

In Batman Begins, we have the well-known trolley experiment, in which a person must imagine that s/he is on a trolley that is barreling down the tracks towards five people (or babies, depending on if your ethics professor is more or less of a sadist) who are tied onto the tracks.  The imaginer can then either imagine that s/he pulls a lever, switching the trolley onto another track that only has one person (or baby) tied to it, or that s/he does nothing, allowing the trolley to kill the aforementioned five.  The utilitarian will say, “I switch the trolley to the new track, because it’s better to kill one person than to kill five.”  The non-utilitarian will say, “I leave the trolley to kill the five, because at least then I am not morally at fault.”  The main ethical question is: “Is there a difference between killing a person and letting a person die?”

In the first movie, Nolan gave Batman basically the same challenge, except he wasn’t on a trolley–he was on an elevated subway–and there was only one person to kill: Mr. Ra’s al Ghul.  Batman’s answer to the ethical dilemma is (and I quote): “I won’t kill you, but I don’t have to save you.”  In other words, killing is wrong, but allowing someone to die is A-OK.

Of course, there’s an added element here that the original thought experiment doesn’t include: Ra’s al Ghul is clearly a Bad Guy.  Even a Super Villain.  If Batman was in the original experiment, and the five people tied to the tracks were Rachel Dawes, Luscious–erm, Lucius Fox, Alfred, and both of his alive parents, while the one person on the second track was Ra’s, I’m not sure he would have the same answer.  Then again, Batman’s one rule is not to kill his enemies…  Hmm…

Anyway, Batman fans on the Internet fought over whether the Real Batman from the comics would actually allow an enemy to die, and we all thought that the thought experiments were over.

Oh, were we wrong.

In The Dark Knight, we got probably the most famous thought experiment of them all: The Prisoner’s Dilemma.  Here’s the original version (from Wikipedia):

Two suspects are arrested by the police. The police have insufficient evidence for a conviction, and, having separated both prisoners, visit each of them to offer the same deal. If one testifies (“defects”) for the prosecution against the other and the other remains silent, the betrayer goes free and the silent accomplice receives the full 10-year sentence. If both remain silent, both prisoners are sentenced to only six months in jail for a minor charge. If each betrays the other, each receives a five-year sentence. Each prisoner must choose to betray the other or to remain silent. Each one is assured that the other would not know about the betrayal before the end of the investigation. How should the prisoners act?

Or, in visual form, via Encyclopaedia Britannica:

Don’t remember that in The Dark Knight?  Okay, let’s pretend that we don’t have two prisoners but hundreds, and let’s pretend they aren’t imprisoned in jail but on ferries in the middle of a river.  And let’s say they each have a detonator, and let’s say the consequence of not defecting isn’t a 10-year sentence but a fiery death.  It’s the same story, just with a little more… style.

Of course, in the film, idealism wins out–which is why I don’t understand why so many reviews call the film bleak and despairing.  Honestly, if I wrote the movie, the scene would go like this:

JOKER (over the PA): Tonight we’re going to try a social experiment.  You each have detonators to the other ferry.  If, by midnight, you don’t blow up the other ferry, I will explode you both.

JOKER (to Batman): Hahahahaha!  You see, everyone is as evil as me!  No, no, actually, that’s not true at all.  Because you know something, Batman?  I was bluffing.  I didn’t even have a detonator at all!

BATMAN: I am not amused.

Now that Mr. Nolan has used the two most popular thought experiments, what’s left, we must wonder, for his third installation?  Luckily for you, I was able to get my hands on some rough sketches of shots from Batman 3: The Riddler’s Paradox: 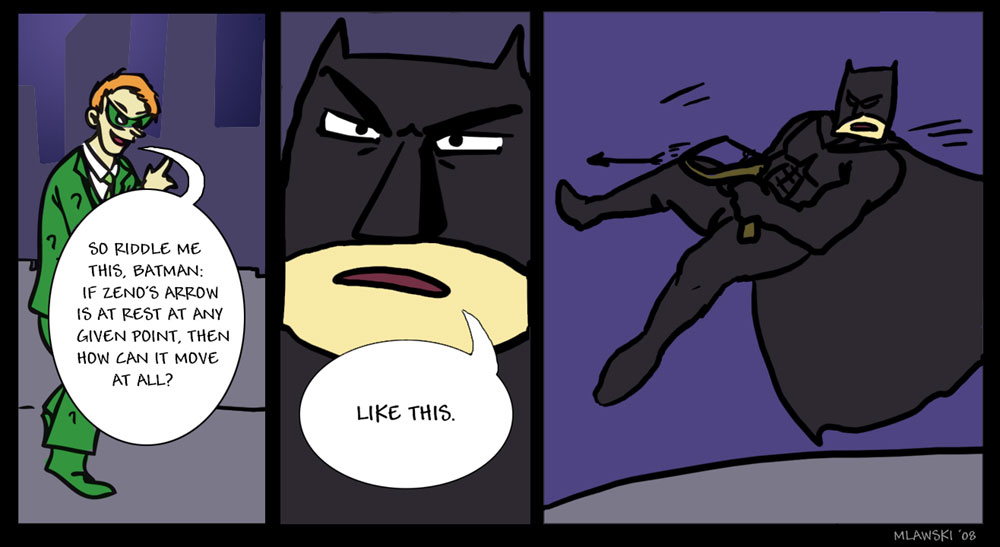 PS: This isn’t my last post on Batman.  Not by a long shot.

This is the first post in the Philosophy of Batman series. When you’re done, check out Part II, Part III, and Part IV .

58 Comments on “The Philosophy of Batman”