A lot has already been said about the informational “echo chamber” in which most of us now live, and which social media has only served to reinforce and amplify. But in case you haven’t been paying attention to the world for the last several years – well, first of all, I envy you well beyond my capacity to express it, but second: in brief, the “echo chamber” is what happens when a large group of people only pay attention to others – whether people they know, or media outlets – whose ideological views already align with their own. This creates for them a false perception that their belief system or political perspective is not only the dominant view, but the “common sense” or logically normative view of society as a whole.

What hasn’t yet been as closely scrutinized is what I’m going to call the “Look At This Asshole” Effect. Essentially it consists in bringing into the echo chamber a strawman version of someone who is meant to represent the opposing ideology – not for the purpose of genuine intellectual engagement with the opposing ideology but purely to reassure the echo chamber that its views must be the right ones because the opposition are a pack of lunatics.

A member of the in-group will cite certain extremely selective quotations from members of the out-group for the exclusive purpose of stirring up hostility against that figure in particular and the out-group that he or she represents (or is purported to represent) in general. Sometimes this takes the form of an accurate quotation from someone who is genuinely antithetical to everything that the in-group stands for, but at least as often it relies on misquotes, out of context quotes, or outright fabrications. The figure then becomes inextricably associated with this statement or set of statements, and the statement(s) and/or person is transformed into a shorthand among the in-group for a certain reprehensible attitude or as representing an affiliation that the person may or may not actually subscribe to in real life. Eventually this person or his/her “type” will become so caricaturized through mockery that members of the in-group no longer remember that their exaggerations ad absurdum don’t actually represent the views of any real person. This is how you get Christians who say “atheists believe that our great-grandparents were monkeys” and atheists who say “Christians believe in a giant bearded old man who lives in the clouds.” Nobody actually believes either of those things, but there are plenty of people who don’t understand that those statements were meant to be derisive hyperbole and not descriptive of anyone’s genuine beliefs. Even when a particularly extreme member of the out-group’s views are represented accurately, that person and their view tends to be treated not as a fringe view but as the common, normative, elementary view of the majority of the group. 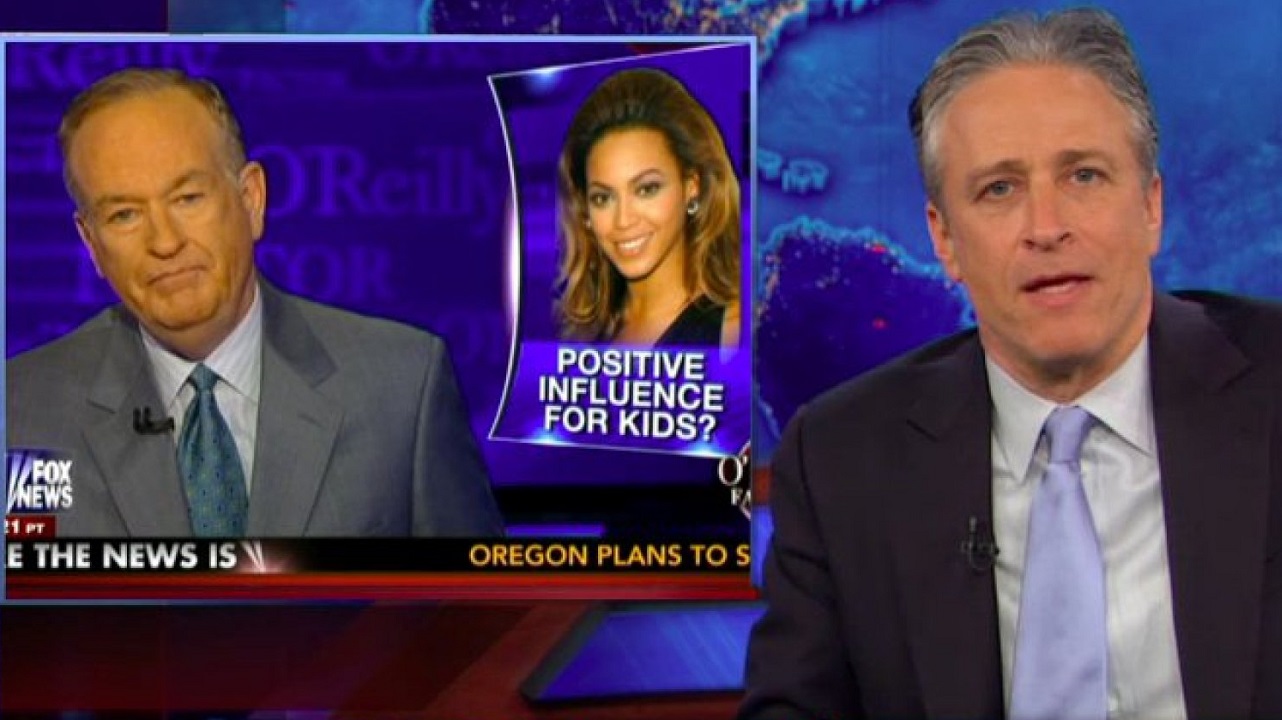 The most obvious example of the “Look At This Asshole” Effect comes from George Orwell’s 1984. The “Two Minutes Hate,” which evolves into an annual “Hate Week,” requires all citizens to spend a certain amount of time in a state of mindless fury against the figure of Emmanuel Goldstein, a likely-fictitious rebel leader who symbolizes any and all opposition to Big Brother and The Party.

In the 2014 movie “God’s Not Dead,” which Wikipedia describes as an “American Christian drama,” a liberal elite college professor requires that all his students declare that God is dead in order to pass the class. One student, a Christian, refuses. Much of the rest of the movie is devoted to the student debating the professor on the existence of God, eventually culminating in the atheist professor unwittingly admitting that it isn’t that he doesn’t believe in God, it’s just that he hates Him. The student manages to convince the whole class that God is not, in fact, dead, and then later the professor is fatally struck by a car and converts to Christianity as he lays dying.

On the other side of the equation we have Bill Maher’s 2008 documentary “Religulous.” Maher interviews a number of figures from different religious traditions and makes them look like nutcases and/or idiots. It’s a parade of “Look at this asshole; now look at this asshole,” with the moral, of course, as if it were ever in doubt, is that believers are dangerous morons. He doesn’t engage with moderates, and he doesn’t present any particularly nuanced commentary. But he doesn’t have to, because he isn’t trying to convince anybody. Not really. He’s just making his audience – people like himself, who believe that religion is so self-evidently false that only the stupid or the brainwashed or the deluded could possibly believe it – feel superior and good about themselves by laughing at their ideological opposites.

These are only two examples, but our media is rife with this kind of thing. Nothing strengthens a group more effectively than teaming up against a common enemy, and the best way to turn a mere out-group into a true foe is by dehumanizing them. Thanks to the echo chamber and the “Look At This Asshole” Effect, we’ve transformed practically our whole media apparatus into a perpetual Two Minutes Hate, 140 characters at a time.

The exponential proliferation of media outlets and platforms has, ironically, made it easier than ever to avoid opposing viewpoints and the people who espouse them. We only read the newspapers and websites or watch the TV programs or channels that agree with our perspective – and our perspective can now be as concentrated and singular as possible, and we’ll still be able to find some website out there to enable us, transforming the majority of humanity into our anathematized out-group. We only follow people on Twitter who will reinforce our belief that we are right and everybody else is wrong – and now it’s even possible to filter out specific keywords from your Twitter feed so you never have to accidentally come across the wrong kind of opinions. If you voted for the other candidate, you can just go ahead and unfriend me right now. The Venn Diagram depicting the overlap of people who both watch Fox News and listen to NPR must be thinner than the Slender Man’s necktie. That’s the echo chamber. So practically the only time we ever come across a member of the opposition is when they’ve said something really egregious (or someone has invented something really egregious that sounds like the kind of thing that we feel a member of the opposition would say) and we want to make ourselves feel extra righteous by burning them in effigy. Or making fun of their stupid hair or the way that they dress. In other words, whenever we feel the need to reinforce our own ideology by pointing at someone who symbolizes a different one and going, “Look at this asshole.”

That’s why the number one question that’s asked when an opposing ideological group gets their way is “how could this have happened?” Because proceeding from the premises that 1) you are a reasonable person, and 2) the only opposing viewpoints that you’ve ever heard have been totally batshit insane, you are incapable of comprehending how the majority of the world has evidently lost their minds. Cognitive bias is a tough nut to crack; the human mind is extremely reluctant to reevaluate its own beliefs, particularly when it hasn’t come into contact with any particularly convincing counterexamples, but only the naked fact that more people disagree with them than agree. Truth isn’t decided by majority rule, of course, and so it is absolutely possible for most or all other people to be wrong about something, and make bad decisions based on faulty logic. But admitting that must also entail admitting that you might be the one who’s wrong. We can’t have that. Instead we diagnose the opposing group with some contrived, pseudopsychiatric condition that explains their aberrant beliefs: the diabolical capitalist system has struck them with false consciousness (i.e. those poor, unlettered blue-collars are just too stupid to know what’s best for them); maybe they believe that they deserve to be punished and humiliated and so they derive some kind of bizarre, quasi-sexual satisfaction from seeing the identity group to which they belong be disempowered in society to the benefit of some other (perhaps historically oppressed or disadvantaged) group; or it could simply be that they’re secretly working for The Corporations, The Commies, The Jihadists or the Zionists or Big Pharma or Kanye or whoever else has pissed you off most recently. 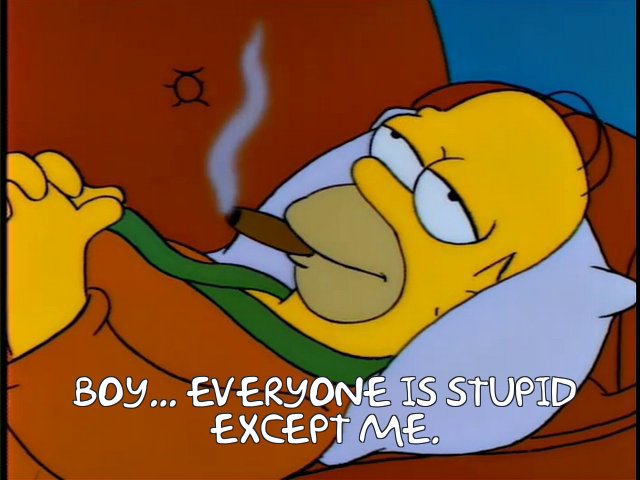 The “Look at This Asshole” Effect strengthens the echo chamber in two main ways.

One, it creates tighter solidarity among the in-group by providing an enemy for everyone to take shots at in an environment wherein the target or group to which the target belongs is incapable of defending themselves, either simply because the target is not themselves present among the group that’s engaging in the pillorying, or because anyone expressing sympathy with the target or the target’s beliefs, even if only to point out that the quote being used may be out of context or straight-up false, is themselves attacked by the in-group (rather than engaging the dissenter rationally), or by censoring dissenting views entirely – for instance, removing message board posts for so-called “brigading” a topic or forum. The dissenter is essentially bullied into submission. When someone attacks a dissenter by calling them a “shill” or a “cuck,” by accusing them of any of the various flavors of “splaining,” or using any other of the thought-terminating clichés of which our culture is so fond, what’s really happening is that the members of the in-group, rather than engaging with the dissenter’s argument, are using their preferred version of “Look At This Asshole,” instantly turning the dissenter into an object of ridicule rather than a fellow human being with a different perspective. 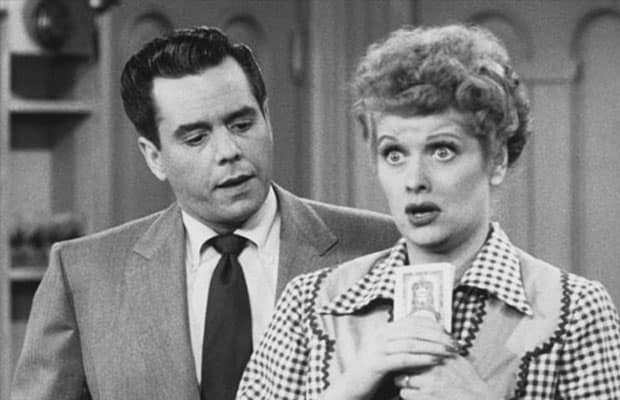 Lucy, you’ve got some whitesplaining to do.

The second way that the “Look At This Asshole” Effect intensifies the echo chamber is by progressively tightening the boundary for acceptable opinions, so that a once-cherished member of the in-group can find him or herself mercilessly abandoned for saying something that would have been perfectly within the sphere of acceptable rhetoric a week earlier. In other words, it fosters extremism. It foments conspiracy-thinking. Because when someone who was known their whole life as a staunch Patriot / Feminist / Whatever goes off the rails, it can only mean that they’ve either “sold out” or that someone “got to” them. Taken to its logical conclusion, this will lead your echo chamber, your in-group, eventually to consist of you and maybe a dozen other like minds huddled together somewhere on the Dark Web, discussing how everybody else in the world is spending all their time and effort trying to destroy you.

That sounds severe – and it is – but it is happening and it’s happening more and more. We’re increasingly losing the capacity to honestly evaluate information that challenges our cognitive biases (a capacity which is already notoriously weak in the human mind), not only because we surround ourselves with people who think like us and ostracize those who don’t, but because the only representatives of “the other” that we regularly encounter in our mercilessly curated Friend Feeds and opinion shows are caricatures, trolls, and fanatics; because we exclusively invite strawmen into our echo chamber so our only encounter with dissent is – by design – the fringiest of the fringe. The craziest thing that the craziest person has ever said is presented and repeated as if it were the standard, conventional party line. Our own view, of course, is more nuanced. But the other guys? Well, I mean, come on.

Just look at this asshole.

12 Comments on “The “Look At This Asshole” Effect”