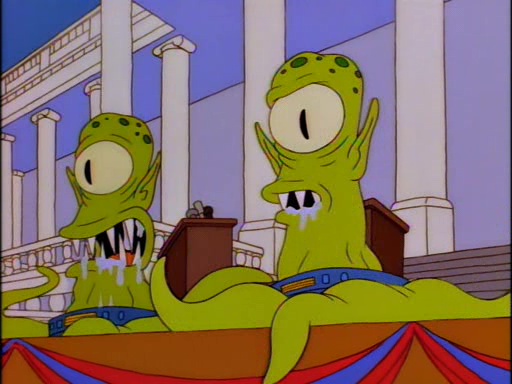 On October 27, 1996, The Simpsons gave us one of the darkest, funniest political satires of all time. We were weeks away from a Presidential election, and the third segment of “Treehouse of Horror VII,” entitled “Citizen Kang,” saw two evil aliens assume the identities of Bill Clinton and Bob Dole in order to take over the country.

This was the period in which The Simpsons was at the top of its game, and there are a ton of great lines. “Abortions for some, miniature American flags for others,” gets quoted a lot, and I’m quite fond of Homer’s panicked, “What have I done? What am I doing? What will I do?” 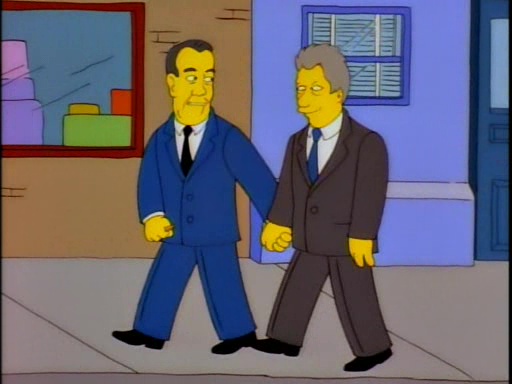 But it’s the big jokes that really hit hard. First off, the two aliens replace these politicians and nobody notices the difference. “Fooling these Earth voters is easier than expected,” says one. “Yes,” agrees the other. “All they want to hear are bland pleasantries embellished by an occasional saxophone solo or infant kiss.”

And then in a twist that’s Mark Twain meets Rod Serling, the aliens are unmasked… and it doesn’t even matter. “We are aliens,” they cackle, “but what are you going to do about it? It’s a two-party system. You have to vote for one of us.” (Today there would have been a birtherism joke.) South Park gave this scenario their own spin eight years later, when Stan is forced to make a pointless mascot choice between a giant douche and a turd sandwich. Simpsons did it!

So Americans go to the polls and vote for their own enslavement. When Marge complains, “I don’t understand why we have to build a ray gun to aim at a planet I never even heard of,” Homer gets the episode’s iconic punchline: “Don’t blame me. I voted for Kodos.” The cynical takeaway is that partisanship blinds us to the obvious truth that “our guy” would probably be just as bad. All the politicians are b-movie monsters, and the freedom to pick our own poison is just a way to get us to accept the miserable status quo.

In a way, this episode seems more relevant than ever this year. Trump and Clinton could only be more unpopular if they WERE hideous space aliens. In fact, there’s a popular bumper sticker that suggests a third party option: “Giant Meteor 2016.” But I would actually argue that “Citizen Kang” has never been LESS valid. The joke was that the two candidates are exactly the same, and shared the identical humanity-enslaving agenda. This year, the candidates couldn’t be more different. They may both be unlikable, but anyone who thinks they’re interchangeable isn’t paying attention (although there are a lot of people out there who believe exactly that).

So even if you think that both candidates are “nothing but hideous space reptiles,” as Homer puts it, at least this year they’re from different galaxies.