If this is your first time watching movies with us, “The Overview” is Overthinking It’s series of alternative film commentaries where the gang from from Overthinking It—the smartest, funniest pop culture site on the whole internet—watch and discuss their favorite movies in real time. Download The Overview and cue it up alongside your own copy of the movie—DVD, Blu-Ray, downloaded, streaming—to join in the fun. And, as with all of our paid products, Overthinking It Members get The Overview for free or discounted—Join now!

The Overview is back, and it’s In this edition, we celebrate St. Patrick’s day, the great city of Boston, Mass., and criminality allsorts by discussing The Departed, Martin Scorsese’s 2006 Oscar®-winning crime drama, both loosely based on the life of a real Boston gangster and an adaptation of the 2002 Hong Kong thriller Infernal Affairs. 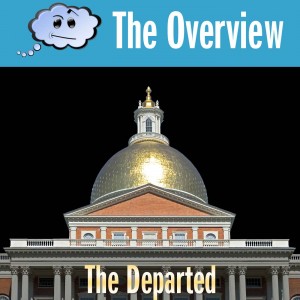 Look, forget about it. Your old man was a janitor and his son’s only a cop.

When you decide to be something, you can be it. That’s what they don’t tell you in the church. When I was your age they would say we can become cops, or criminals. Today, what I’m saying to you is this: when you’re facing a loaded gun, what’s the difference?

Featuring universally excellent performances and sporadically excellent Boston accents from an all-star cast of Jack Nicholson, Leonardo DiCaprio, Matt Damon, Mark Wahlberg, and more, the film is a profoundly overthinkable meditation on identity, violence, and the broken bond between fathers and sons. So basically a Scorsese movie.

Check out The Overview, the commentary series that listeners have called call “So good, I don’t even need the movie to enjoy them.” (Don’t get us wrong, we recommend you play the movie too. But it was sure nice of them to say.)

Get The Overview Now