Ben Adams and Matt Belinkie settle into their tower and get ready to watch the forest burn for the summer with a deep dive into Firewatch. In Diary #1, they discussed what drew them to the game, and its heartbreaking introduction. Last week, they began to explore the beautiful and mysterious Wyoming forest.  This week brings them to the midpoint of the summer, where their relationship with Delilah is growing more complicated and an ominous fire is growing on the horizon.

These diaries are just an appetizer – for the full discussion, check out the Firewatch Unlocked podcast which is available for download to our Members. 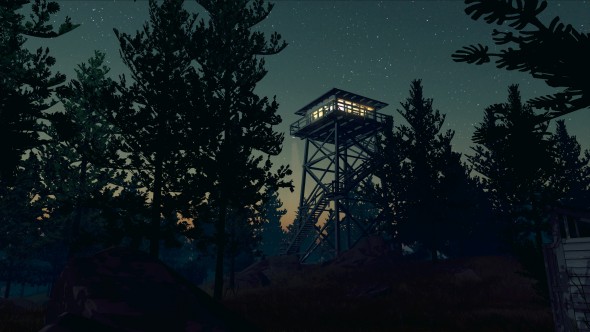 Adams: What do we make of the half-asleep/half-awake conversation between Henry and Julia? I read it as a conflation in Henry’s head of Julia and Delilah. Which makes sense in a way – at least at this point, the two women are complementary parts of Henry’s life. Julia is still a living, breathing human, with all of the bodily needs that Henry is all to aware of after trying to take care of her. The only thing Julie ​isn’t at this point is someone that Henry can talk to. Delilah is the exact opposite – for Henry, she has essentially no body or corporeal form, but is just a voice coming from the wilderness.

It’s interesting to me that it’s played as being not completely a dream – even though Julia’s end of the conversation is in Henry’s head, clearly the events of the night actually happened (i.e. Henry got up, went to the table, picked up the radio, and started talking into it). We know that because Delilah comments about the conversation later. 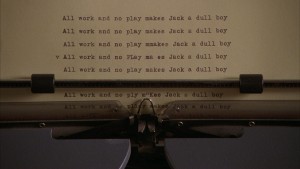 Your tower *does* have a typewriter in it. Just saying.

Belinkie: I’ll be frank – it creeped me out. In our Firewatch Unlocked discussion, we discuss whether there’s something spooky in the woods or whether there’s something spooky about Henry. This definitely seems like evidence that Henry might not have a full grip on reality. Or it might be evidence that the forest is messing with him, like in The Shining. What would happen if Julia asked Henry to do something for her – perhaps do something to Delilah? Would we have a choice as players?

Okay, moving away from the creepy mystery stuff, I want to talk about how often I get lost in this game, and how refreshing it is. I’m used to games that make navigation as clear and painless as possible. Some games will superimpose a dotted line on the street, marking your route. Batman: Arkham Knight puts a giant bat symbol in the clouds above your next destination. Firewatch gives you a compass and map and leaves you to figure it out.

I should mention that the environment isn’t that confusing or mazelike, but I still stumbled blindly in the wrong direction time and time again. But this didn’t seem frustrating. It seemed like a feature, not a bug.  The game DOES mark your current position on the map, which I very much appreciated. It would be more realistic without that, but I’d probably still be looking for that downed phone line. 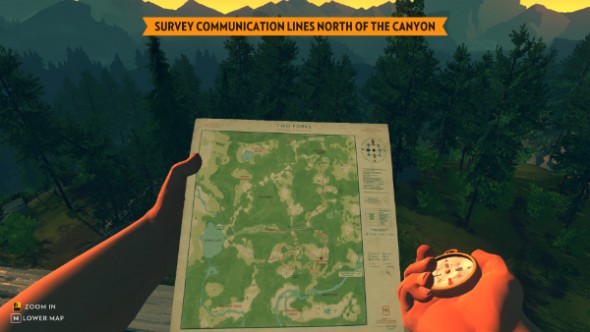 Adams: I’ve actually been a little disappointed so far in how hard it is to get lost in this game – it’s difficult to get off the beaten-path (so to speak), as the trails are hemmed in on pretty much all sides.  I agree the no-clutter display of the game is great, and it’s a lot of fun to have to pull out the map and even use the compass to figure out where to go next. I would actually kind of love it if you didn’t have a persistent “Where am I” symbol, and you had to figure out where you were by dead-reckoning, reference to landmarks, etc.  But that might get in the way of story too much if you were completely lost (as I have been while hiking on actual trails). 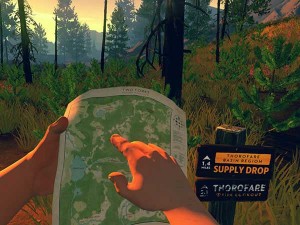 Maybe as a compromise it just needs a feature where you can “get your bearings” and figure out where you are at any particular time, but doesn’t have the real-time tracking that takes you (or at least me) out of the experience a little bit.

Belinkie: Way to shame me with your superior navigation skills. My old Cub Scout troop leader would cry if he saw me stumbling around in circles, somehow missing the clearly marked trail I was supposed to follow.

Honestly, I think the game is telling me to slow down and take in the details. The books in all the supply boxes have readable back covers. If you zoom in you can actually see the finished pages next to Henry’s typewriter. There’s a whole series of letters between two previous lookouts that you can find scattered around. Are these things just background details, or are they crucial clues to understanding the mystery that seems to be deepening with every passing day?

One final thought. It’s almost certainly a coincidence, but it’s one that makes me smile. Firewatch is set in 1989, the same year this song was a #1 hit for Billy Joel:

Ben and Matt will be completing Firewatch over the coming weeks, and sharing their impressions in these diaries and in a special Firewatch Unlocked podcast available to OTI members.