Ben Adams and Matt Belinkie are playing through Firewatch, a new indie game where you take a summer job as a fire lookout, which is like being a park ranger but much less glamorous. In Diary #1 they discussed their expectations and the game’s striking introduction sequence. Now it’s time to get to work. Spoilers for Firewatch follow. 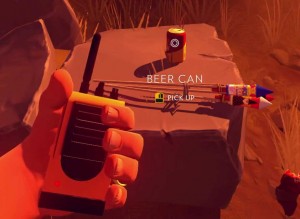 Ben Adams: Did you pick up the beer cans? I did. As a loyal National Parks Service employee, I felt bad about just leaving them behind. I was really struck right from the beginning how real everything felt. Video games are normally so results and goal-oriented that I never give a second thought to the mess I’m leaving in my wake, but everything in Firewatch is so lush and beautiful that a bunch of crappy light beer cans cluttering the trail made the compulsive side of me come out a little bit. 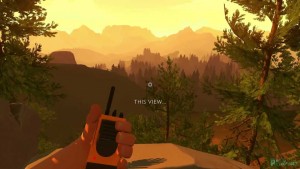 I also did something I can never really remember doing in a game before: slowing down to take in the view. Normally, like in an FPS or platformer, I’m mashing the “sprint” button whenever I’m not actively engaged in combat or puzzle solving (or, failing that, the left and right C buttons to strafe). Here, you can walk or jog, and though I usually jogged to get from A to B, at a couple points I slowed down on the trail just to soak in the environment. That was kind of neat. 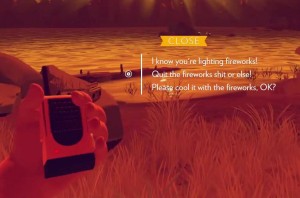 Matt Belinkie:  I not only picked up the beer cans, I was mildly disappointed there wasn’t some sort of in-game dialogue or Steam achievement for it. And then I felt embarrassed at myself for expecting one. You’re a goddamn Parks Service employee! You really need a pat on the back for cleaning up litter?

It’s no coincidence that the action on Day 1 picks up around sunset. This is a really majestic introduction to your new home, awash in golden light. But we weren’t the only people enjoying the scenery; Henry is too. We get our first introduction to him as he arrives at the lookout and Delilah drunk dials him, teasing him about his reasons for taking the job. Henry is sullen with a bit of a mean streak. We know enough about him to understand that he’s got reasons for being withdrawn. But as you start exploring the forest, we see another side of Henry. He calls Delilah just to say how beautiful the meadow is. Then later in the cave, he gets downright giddy: 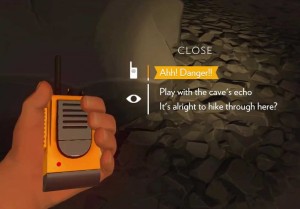 He also drops this fascinating line:

Henry: I used to go caving with someone back in Colorado. She loved it. Might be great to explore it sometime this summer.

It’s nice to see Henry coming out of his lonely shell a little, but I notice that he avoided the w-word. Did he fail to mention his wife to postpone an awkward conversation? Or because even at this early stage, Delilah is more than just a co-worker. (It might not be a coincidence that the biblical Delilah seduces and betrays Samson.) 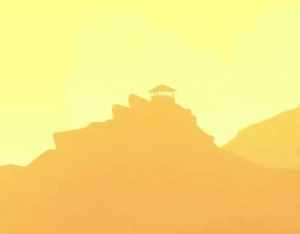 This may say more about me than it does Henry, but I think Henry avoids the w-word more out of a desire to avoid the conversation than to preserve the possibility of a romantic encounter with Delilah. I read the choice to take the Firewatch job as an effort to escape human connection altogether, with “answering questions about my wife” being at the top of Henry’s list-of-reasons-to-flee-society. 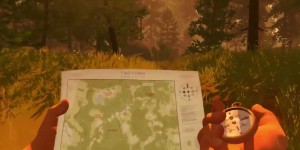 Belinkie: Let me tee up a conversation for next time. How do you think Firewatch straddles the line between game and interactive movie? I don’t mean to suggest that one is bad and the other is good. This is something I’ve been mulling over for years. Compare Firewatch to your other current go-to game, Destiny. That’s all about reflexes, strategy, and customization. Firewatch, on the other hand, doesn’t give you points. It doesn’t reward quick fingers. At least on this first day, it’s unclear whether you and I could have made any different decisions. Your enjoyment as a player is based not on mastering the game mechanics, but on watching the dialogue and story unfold.

But at the same time, a certain level of autonomy is necessary for the player to get immersed in that story. I’ve been playing Telltale’s new Minecraft: Story Mode recently, and it veers dangerously close to “watch conversation, walk down hall, trigger next conversation.” The “game” parts of the game can feel like filler designed to slow things down. So far I think Firewatch escapes that, possibly because the experience of walking through the woods feels so damn good. You may be locked into a scripted experience (it remains to be seen how much our stories diverge), but like you said, this is a game that actually makes you want to slow down and enjoy the journey.

Check back next week for more Firewatching.