The last couple of weeks have been really Marvel-heavy, so here’s a little bit of a breather: four smaller-press books and no Marvel at all! 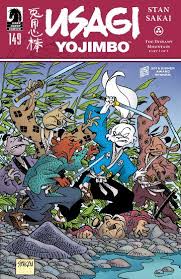 We’re coming up fast on issue #150, and here is another one-shot story (advertised on the front cover as “The Distant Mountain Part 1 of 1,” which I find both informative and adorable). Passing through a town on his way to nowhere in particular, our rabbit ronin Miyamoto Usagi joins the trail of a huge procession; despite the fact that they are the hired retinue of the despicable Lord Akagawa, Usagi figures that following them will make it less likely that he’ll be attacked on the road by bandits.

Without spoiling too much, Usagi ends up joining with a samurai named Yoshi who is devoted to protecting and delivering a stone called Toyama Ishi that is either worthless or priceless beyond measure. Usagi also ends up killing a whole lot of people. Or, well, anthropomorphic animals. But they’re still people. I sometimes wonder how many people Usagi has killed over the years. It must be thousands. The thing is, we know, of course, that Usagi isn’t going to die at the hand of one of these random jerks who fatally underestimates him every single issue. Usagi is one of the greatest swordsmen in his world, and while we’ve met a handful of others who are as good as him or better, the real drama in the battle sequences comes through Stan Sakai’s art rather than the stakes of the fight. His pencils are looser now than they were early in the series, making the characters and backgrounds feel really fluid and natural, and sometimes a little bit messy in the way that real things in real life are messy, especially when in motion. And we also get the trademark Stan Sakai death-yells, when dudes shout weird things like “FLOOK!” when Usagi kills them. So good.

Where to Start: Usagi Yojimbo: The Special Edition

Time Investment: At least 148 issues, but totally worth it. 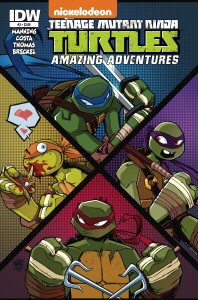 This issue’s main story hardly includes the Turtles at all. It’s mostly a flashback to the period during which the Kraang had overtaken New York, mutated most of the population and quarantined the city while they perfect their weaponry ahead of the intended invasion of the whole planet. When the Turtles return to New York City they meet the mutant supergroup the Mighty Mutanimals, which consists of good guys and (former(?)) bad guys from earlier in the series who’ve joined forces to fight the Kraang and liberate the city; in the episode, the Mutanimals are already formed, but here we get to witness the way that the team first got together.

It’s super interesting that the Mighty Mutanimals have made their way into the cartoon (and therefore this spinoff comic series) continuity; the group originally appeared in the TMNT Adventures series published by Archie Comics and later in their own short-lived spinoff series, only to be unceremoniously slaughtered by cyborg mercinaries in probably the most shocking event I ever witnessed in a comic when I was fifteen. The Mutanimals were never very popular in their original incarnation (which is why their series was cancelled after only nine issues and then, you know, mass murdered) but they obviously made a big impression on the minds of this generation’s TMNT creators, because versions of the Mutanimals have now shown up in both the new cartoon as well as the ongoing IDW series.

This story reminds me a little bit of the (also short-lived) TMNT series published by DreamWave that spun off from the 2003 FoxKids Turtles cartoon. It was written by big-deal comics guy Peter David and gave the perspective of the many side-characters around the periphery of the Turtles’ adventures as depicted in the show. A really cool premise that unfortunately never got very far.

The backup story in this issue features Michelangelo and Napoleon Bonafrog going to an amusement park and taking on some bullies – as well as prejudice. The whole thing is pretty fun. The new Turtles cartoon pulled a brilliant move when they imported the Punk Frogs from the original cartoon; while the original Frogs had amusing names (they were named by Shredder after his favourite historical figures: Attila the Frog, Genghis Frog, Rasputin the Mad Frog, and Napoleon Bonafrog), they didn’t really have any individual personalities to speak of. The new cartoon (and so this comic) makes each Frog distinguishable both visually and in terms of character – and here’s the most brilliant part: not only is Napoleon Bonafrog here a parody of Napoleon Dynamite, they actually got Jon Heder to do his voice! Parody and pastiche is a fundamental part of the Ninja Turtles ontology, and it makes me happy to see how right the people in charge of the current incarnations of the TMNT are getting this stuff. Well, except the movie, the DVD for which I’m including an Amazon link here but that doesn’t mean that I’m recommending that you buy or watch it. Just for the record.

Where to Start: TMNT Amazing Adventures #1

Time Investment: Two issues before this one.

Recommended if you like this: Teenage Mutant Ninja Turtles Volume 1: Attack of the Mousers by Peter David 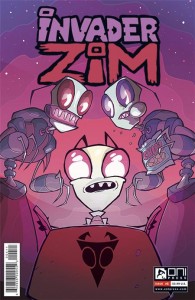 The Almighty Tallest, leaders of the Irken Empire (because they’re the tallest), use an experimental Subquantum Wormtunnel Enactuator to send the last Nacho-Munchin to Zim on Earth, because the wormhole generator thingy happens to be closer than the garbage can. They tell Zim that it’s a weapon that he has to figure out how to use. Zim hilariously fails to figure out how to use it (because it’s not a weapon, right, it’s a crunchy snack food), so he sends it back to them, but because the reverse-teleportation unit isn’t working right, half the universe explodes. “Just not our half. Whew.”

This issue is kind of just an excuse to do Invader Zim-style jokey-jokes and not much of a story in itself. It’s also the second issue in a row that’s ended with something important being destroyed (last month it was the Earth, but it got better somehow off-panel). Which is fine! But I’m really starting to crave some continuity. Like, just a little teeny tiny bit. Cool?

Where to Start: Invader Zim #1

Recommended if you like this: Squee’s Wonderful Big Giant Book of Unspeakable Horrors 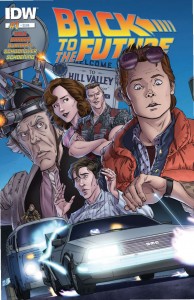 Back to the Future #1
IDW Publishing

Published on October 21, 2015 (which is also the date I’m writing this review, it’s just that in keeping with the time travel theme I sent it into the future, which is why you think it’s late – you’re just not thinking fourth-dimensionally!), which of course was the date that Marty travelled to in Back to the Future Part 2, this comic doesn’t continue the adventures of Marty and Doc but rather fills in gaps in our knowledge of the Back to the Future backstory with explications of events that were only hinted about in the canonical works.

And that’s a good thing. Bob Gale, who wrote the original movies as well as the stories in this comic, explains that the subtitle of this series is “Untold Tales and Alternate Timelines” for good reason: “Traditional comics characters don’t age. Superman and Batman have been around for 75 years, and there’s no grey hair on Clark Kent or Bruce Wayne. They’re ageless as they’re constantly updated for each generation. But Back to the Future is all about specific dates in the space-time continuum. It’s about the personal histories of our characters. Marty McFly was born in 1968. He’s 17 in 1985 and 47 in 2015. […] But…did we want to bring BTTF into the present day? Did we really want to see the adventures of the 47-year-old Marty McFly? Or a new cast involving other McFly relatives?”

Turns out, no, we didn’t. It’s these characters that we love, and time travel stories get harder and harder to tell the more of them you tell. So instead we get the story of how Marty first met Doc and became his assistant (in 1982), and the story of Doc Brown’s work on the development of the atomic bomb for the United States government (in 1943).Bob Gale of all people understands that Back to the Future isn’t really about time travel – the same way that all science fiction isn’t ever really about what it’s about, not spaceships and aliens alternate dimensions – but about people, how we respond to our circumstances, the choices that we make, and what the political and technological environment means to us and reveals about us. So there actually isn’t any time travel at all in this comic. And that’s great.

Where to Start: This is the first issue but if you haven’t seen the Back to the Future Trilogy, I mean, is there something wrong with you?

Recommended if you like this: Ant-Man’s Big Christmas. Seriously.

So here’s something interesting: three out of this week’s four comics are licensed properties, and only one of those is adapted from a property that’s contemporary and ongoing. Comics has found itself becoming the medium of choice for classic, cancelled, or otherwise out-of-date stories that originated as TV shows, movies, or videogames. Many series (like Buffy the Vampire Slayer, for instance) have their canonical post-TV seasons being put out as comics these days, and while of course that’s an economic decision (not only is it thousands of times cheaper to produce a comic than a TV show in absolute terms, but consequently the number of books needed to sell in order to break even is a tiny fraction of the number of, say, movie tickets you need to sell for the same content in a different medium), but it’s also an effective way to serialize stories that would otherwise have to be constrained by time limits in addition to production costs. Meaning, the new Star Wars movie probably isn’t going to be much longer than 2 hours of real time and likely take place over a period of days, weeks, or maybe months of diegetic time, but during the same time period that the movie is in theatres you can put out twelve issues of ten different Star Wars comics and flesh out the stories before, after, inside and around what makes it onscreen and in special features. People who read these comics need these stories, and comics is the only medium really capable of delivering them. Even Marvel and DC’s big-deal superhero books are, I’d argue, more like commercials and/or supplementary material to the movies and TV series – where the real money and the real audience is – than the prime medium from which the other stuff is adapted anymore. That’s a pretty strange development. It’s not a bad thing, it’s just the way the economics of entertainment works in the early 21st Century. I can’t wait for the graphic novel tie-in version of Jaws 19.

ALSO: Special thanks to Ryan Sheely for helping me out with Reading List even more than usual.