Richard had to take a week off from analyzing comic books, but rather than let our streak of weekly Reading List columns end at 9, I decided to step in and keep his seat warm for him, at least for a little bit. The problem is, I’m far from current on any comics series, so this is going to be a bit of a Remedial Reading List, covering things that have been out for quite some time, but which I’m only picking up right now.

Ever since our Book Club Podcast on Saga ended a few months ago, I’ve been hungry for more comics to read, and the Reading List columns have only fed that appetite.  On the strength of last week’s column, I picked up the first two volumes of the Sex Criminals trade paperbacks, which then led me to browse my way to the first volume of Gillen McKelvie and Wilson Cowles’s The Wicked + The Divine, and the first issue of Paper Girls, the new series by Cliff Chiang and Saga’s Brian K. Vaughan.  So thanks to Richard, I’ve become a full-blown addict.  My situation is so dire that, I haven’t made it through most of these yet, but I have managed to read the book that motivated me to head to the comic book shop in the first place: Volume 4 of Saga. 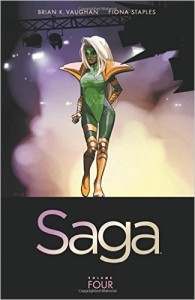 If the 6 hours that we spent discussing Saga are any indication, I’m only going to be able to just scratch the surface of what’s interesting about Volume 4 in the few hundred words that we typically devote to our Reading List columns. But by zooming in on a few key panels, it is possible to highlight some of what is interesting about this volume, how it connects to some of the larger themes that we identified in the first three volumes, and how it indicates where the story is headed. (Warning: This is Saga, so some of the most interesting panels are NSFW. Scroll down at your own risk). 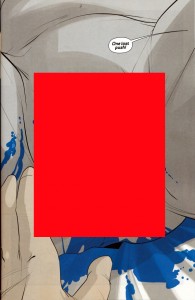 Let’s start at the beginning- a very good place to start.  Chapter 19 starts with an image that echoes the beginning of the whole series: a rather graphically depicted birth scene. In this case however, it is an extreme close-up of Robot birth. In addition to following Saga’s time-honored tradition of starting the issue with a graphic full-bleed image that guarantees some odd looks if you read your comics on the subway, this image and the panels that follow indicate that in this volume, we’re broadening our focus a bit.  In this arc, the Robot Kingdom isn’t just an outside force that is pulled into the hunt for Marko and Alana- it has its own social and political conflicts that can fracture and reshape the core direction of the story. 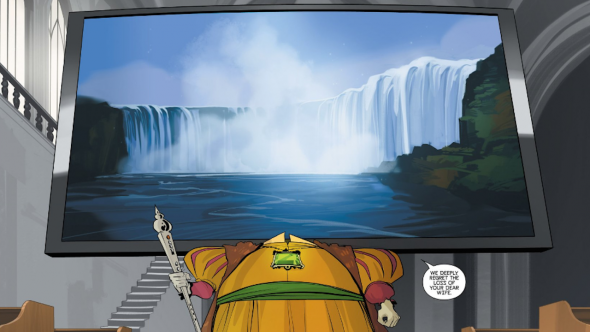 The social stratification in the Robot Kingdom is visually represented by the styling of the monitor heads: Prince Robot IV and his wife have computer monitors, while the economically marginalized Robot kidnapper has an old TV Set on top of his shoulders, indicating the correlation between technology and status.  The ultimate payoff of this pattern comes with the reveal of King Robot, whose head is nothing other than a breathtaking flat panel screen.

By focusing in more depth into the fine-grained status hierarchies in the Robot Kingdom, Staples and Vaughan are able to introduce layers of complexity that spread like ripples throughout the rest of the story.  Much like Alana trying drugs for the first time, just when we think we have mastered the complexity of the world of Saga, we fall even deeper into vibrant pool of patterns, images, and characters. 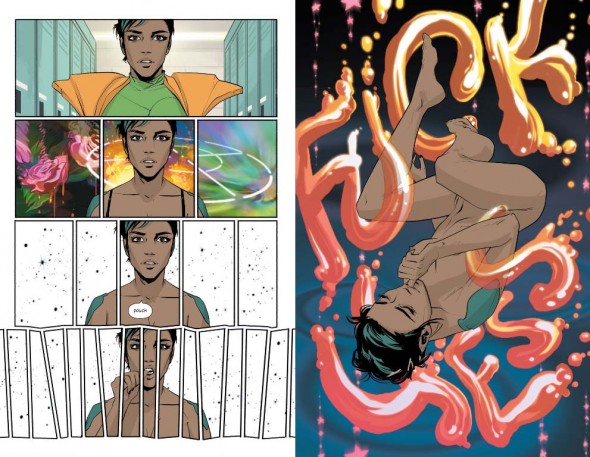 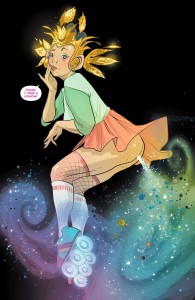 Much like a fart from a mischievous space fairy, a small disruption or new element quickly spreads and expands- without even intending it, Staples and Vaughan have accidentally created a whole new segment of their fictional universe. Oopsie!

The last panel of this volume ties this all together. Marko and Prince Robot appear together for the first time, united by their shared desire to find their kidnapped family members.  Even though the volume started with the introduction of just small amount of additional complexity into  one corner of the Saga universe, the volume ends with the enemies from the first volume teamed up with each other.  How long will this alliance last? What other corners of the Sagaverse will they reveal through their journey?  We’ll find out the next time Richard takes a break and I return with my Remedial Reading List! 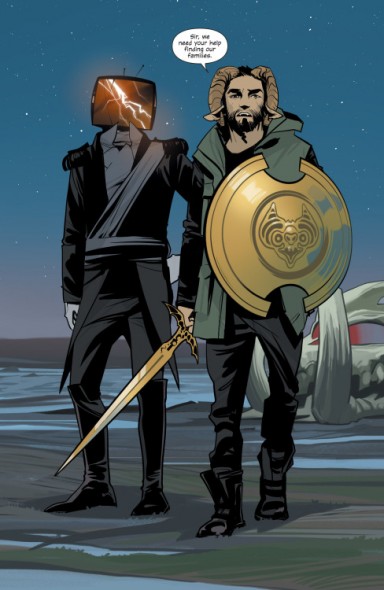 Reunited and it Feels So Good