I have a hard time with bad movies.

This wouldn’t sound shocking on its face, except a lot of my friends like bad movies. I don’t mean their taste is worse than mine—I mean they enjoy watching movies that they know, going in, will be bad. Lots of people do, in fact! Mystery Science Theatre 3000 caught on like it did because it tapped into the time-honored tradition of mocking bombs with your buddies. Even if you don’t aspire to that level of wit, kicking back with the latest Steven Seagal movie and a bucket of beers can be a lot of fun.

(I also don’t mean to imply that every movie I like is a critical darling. I love Road House unironically, I watched Taken with only slight reservations, and there’s no David Mamet movie so stiff that I won’t see it in theaters. But I don’t think of these movies as Bad. I acknowledge their faults and their dated aspects, but I didn’t watch them because of those faults)

Growing up has been a long process of unclenching for me, as I’ve tried to relax my youthful snobbery in the name of bonhomie (and yes, I know dropping bonhomie in conversation only hurts my efforts). But since I’m approaching this as a latecomer, I’m still examining the Watching Bad Movies trend. I’m a stranger here. And one of the most fascinating things I’ve uncovered is that, even within the realm of Bad Movies, there’s a line. There’s Bad Enough to Laugh At and there’s Too Bad to Watch.

Pete Fenzel alluded to this on a recent podcast as the “I, Frankenline“—that bright border of quality denoted by the 2014 Aaron Eckhart action-horror dumper, a movie so bad that Fenzel felt guilty suggesting his girlfriend watch it with him. Something about I, Frankenstein crosses the gulf from Bad-Enjoyable to Bad-Depressing.

On a surface reading, this shouldn’t make any sense. If a movie’s Bad, then it’s Bad, full stop. If it’s fun watching Bad Movies, then it should be just as fun to watch I, Frankenstein as Death Bed: The Bed That Eats. But no one holds this to be the case. Even the most decadent Bad Movie Night connoisseurs will acknowledge some Bad Movies as grueling slogs rather than giggly romps.

Some of the mystery owes to the nebulous word “Bad”. “Bad” can mean a lot of things, especially since the 80s. The rest of the mystery comes from the intricate nature of even the most amateur movie. Every movie in the last hundred years, even the worst of them, has dozens of moving pieces: the cast, the story, the dialogue, the cinematography, the editing, the score, the special effects, and so forth. A movie doesn’t need to botch all of those aspects to be considered Bad. Fumbling on one or two of them can cost you the game.

With that in mind, I’d like to examine the phenomenon of a Bad Movie. I don’t think we’ll be able to paint a clear border between Bad-Fun and Bad-Awful in one Internet thinkpiece. But I hope to establish some signposts and start a discussion.

WHERE THE KIDS ARE HIP

First, a quick break and an object lesson.

Funny, right? Hysterical. But why?

This video takes a property that we’re intimately familiar with—the Beach Boys’ “I Get Around”—and changes our expectations. We recognize the singers and the video; it looks like the TV performances of the Fifties and Sixties that we recognize. Everything about this is perfect—except the sound. Not only is the sound off, it is so far off that the clash is absurd. We can’t imagine grown men who make a living as musicians sounding like that. It’s so bad that it’s funny.

This video isn’t a perfect illustration because the sound is deliberately bad as a gag. But what I’m getting at is the difference between bad composition and bad execution.

You can have a movie, or any work of art, that assembles all the expected pieces and then flubs one or two of them. The novel has a bad ending but at least it has an ending. The bridge sounds like a free Garage Band loop but at least there’s a bridge. The dialogue is so corny that we can blame obesity on it but at least there’s dialogue. This is bad execution. Pointing and laughing is an acceptable response.

But a movie that’s badly composed is just frustrating. 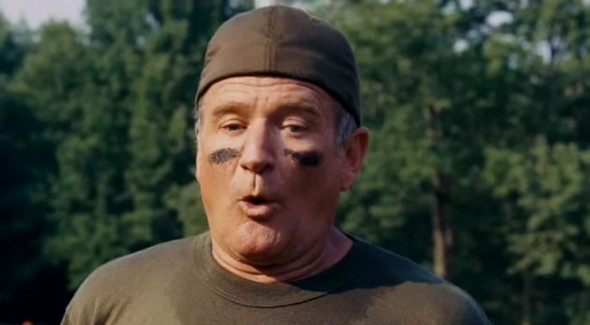 This is a clip from the 2009 aborted Superfund cleanup Old Dogs. Sitting at a generous 5% on Rotten Tomatoes, it starred the late Robin Williams and the breathing John Travolta as hot-shot PR execs who somehow get saddled with two adorable kids for a week. Justin Long appears in the above clip and features prominently in the trailer, but managed to get his name struck from the credits.

If this is your first time watching that clip, I’m guessing you didn’t find it funny. That’s a perfectly normal reaction! This is a bad scene in a famously bad movie, but it doesn’t make us laugh like Underworld: Evolution does. Why?

To truly understand everything that makes this clip bad would take four years at the Tisch School and the soul of a war crimes commissioner. I have neither, but I’ve cobbled together a partial list:

Of course, very few filmgoers have that cinematic grammar, or that level of conscious detachment, when watching an action movie. But we don’t need it. We know it’s bad. It’s confusing and it fails to engage us on any real level.

Old Dogs is the Platonic ideal of a badly composed film. It fails on almost every level a movie can fail on. I want to make fun of it, but there’s nothing to sink my teeth into. All the errors are so fundamental—shot placement, editing, pacing, writing, the lifeless monotony of its lead actors—that they hide in the background, like a garish house that’s also built of rotting timber.

NOW WHAT YOU HEAR IS NOT A TEST

So it’s possible that the line between Bad-Fun and Bad-Awful is whether the movie’s errors are errors of execution or errors of composition. A movie that puts all its pieces in the right place, but chooses a few garish pieces, can be fun to mock. A movie that doesn’t even assemble its pieces properly is just depressing.

But there is another theory that might also explain the same data.

Part of the appeal of watching bad media comes from tribal reinforcement. In getting together with friends to mock Kangaroo Jack, you’re subconsciously saying, “We all agree this is bad, right? None of us think it’s a fine example of the craft?” Making this statement also delivers the inverse: “we are people who know what is good in film.” It re-establishes boundaries and definitions. Every tribe needs a scapegoat, and once in a while the elders need to lay their hands on Blair Witch 2: Book of Shadows and send it off into the desert.

If watching and mocking bad movies is a form of signalling, then it helps if the signal is unambiguous. Everyone needs to point in the same direction at the same time or the choreography fails. If someone brings Pacific Rim to movie night, you run into a quandary: are we watching this to cheer its thrilling fight scenes or to jeer its corny writing? There’s no reason you can’t do both, obviously, but then the movie becomes a point of discussion and a source of intra-tribal jockeying: you’ve got the purists pointing out all the ways the movie could have been better; you’ve got the fans who can watch a movie without pretense, and so forth.

But a movie that everyone agrees is bad unites the tribe. There may be no dispute among matters of taste, but there’s also no dispute that Gymkata has nothing going for it. When the tribe gets to participate in something that unites them against a common enemy, and they get to drink beer and eat popcorn while doing it, they strengthen the tribal bond.

If clarity and strength of signal are what makes a good target, then a Bad-Fun movie needs to be not just bad, but enthusiastically bad. It’s not just a car that struggles in fourth gear; it’s a car that goes careening off a cliff at high speed and explodes in mid-air. It’s not just Timecop; it’s Double Team. Failing with gusto gives an audience clear, unambiguous sign. You can almost choreograph it: as soon as Jeremy Irons opens his mouth in Dungeons and Dragons: The Movie, laugh.

But the reason watching a movie that fails in execution is fun isn’t because we’re all secret aesthetes, and it doesn’t even really have to do with the subconscious effect of a well-composed film. Movies that fail in execution leave big, bloody handprints all over the walls. Those signals are obvious and easy to latch onto. When you want to unite the tribe, you need the most obvious signals imaginable.

MAN IS A MAGICIAN, AND HIS WHOLE MAGIC IS IN THIS

The size and power of the Hollywood industry has blinded us to the challenge of making a good movie. Making a good movie is hard! Asking someone for two hours of their time and promising they’ll be entertained should be a sacred trust! “The rare, strange thing is to hit the mark,” wrote G.K. Chesterton, “The gross, obvious thing is to miss it.” Yet the studio system has turned the art of the weekend release into such a science that we’re shocked when a movie just doesn’t work.

And Bad Movies should remain shocking, or at least noteworthy enough to make fun of. For a movie to hit the screen, it has to pass through the hands of writers, actors, cinematographers, lighting professionals, sound professionals, costumers and makeup artists, directors, editors, producers, and focus groups. That’s a vast conspiracy of people, any one of whom might nudge a movie farther toward Quality and away from Quagmire. Yet their combined efforts were not enough. The wisdom of crowds failed.

The vast majority of movies released in a given year vanish into mediocrity or the morass of cable. A few ascend to critical acclaim or widespread popularity. And a few are recognized as so heroically bad—refusing to regress to the mean, striding into the undertow with their chins up and flags high, declaring that yes, Dane Cook can headline a romantic comedy—that they call to us. We can’t escape into them, but perhaps we can escape from them, pointing and laughing with our friends in a dimly lit room, and that may be solace enough.

10 Comments on “Are You Bad Enough”