WARNING: The following contains spoilers for The Lego Movie. If you have not seen it, go see it. It’s great. Here’s the loveable pop single to whet your appetite:

When you build a house out of Legos, there’s a point where it goes from being “a bunch of blocks” to being “a house.” This isn’t quite when it’s finished — but before that, when the walls and maybe a bit of the roof has started to take shape. Your view of it naturally changes and expands to consider it in a new way.

And yet, as much of a “house” as it becomes, the “Lego-ness” of any such project is apparent from those trademarked studs and certain qualities of shape and texture. It never leaves, and is still there when you look for it.

While considering a Lego object, then, it is possible to “zoom in” and “zoom out” — to think of it as a combination of Lego bricks, or as an object in itself, or in the larger context of what is going on around it.

Taking derivatives and integrals in calculus is similar — you can zoom in on, say, a movement with respect to its rate of change, or pull back on, say, a path that forms the edge of a shape for a wider view of the total area or volume it encompasses — in each case, there are qualities that exist on levels, that are at once always already present, but can be seen better by manipulating what you’re looking at — and that can be explored in either direction once you know the patterns to look for

You cannot differentiate an equation to find velocity, and then integrate that same to find density. At least not except in a very specific sort of example you set up just to make fun of this article (leave it in the comments).

Stories work like this. A lot. You can zoom in a story in many of respects, and zoom out on just as many. And sometimes, of course, stories do it to themselves. Newer stories tend to do it more often than older ones. Community does it constantly.

But we’re here to talk about The Lego Movie, which sports a giant “zoom out” that changes everything — and nothing, at the same time. 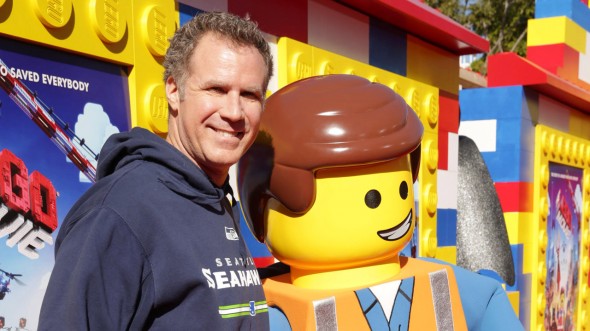 Emmet’s Fall Out of the World

When little Lego Emmet plunges to his doom out the window of President Business’s skyscraper, he wakes to a bizarre new reality. He sees the giant human boy responsible, apparently, for most of the events of his life, and the father whose actions are being interpreted in the story of President Business and the Kragle. He even hears the call for the real “Taco Tuesday.”

The story of the Lego movie expands in a bunch of directions in this moment, but I’d like to focus on two of the patterns — ways in which the story and the viewer can “zoom in” or “zoom out” of what is happening:

– Metatext: This is the often self-aware quality of “about-ness” — specifically the quality of being “about the making and enjoyment of the previous art object.”

A play is “metatheatric” when it shows the audience the difference between a play and reality — say, by having characters in a play perform a play, or by hanging cables in visible places or having characters onstage talk directly to the audience about being in the story. The metaplay is the play about the play.

A film is “metacinematic” when it is about making movies or acknowledge that the thing you are watching is a movie. A great, example of this is the not safe for work film projection and splicing scene from Fight Club. The metafilm is the film about the film.

– Hypertext and Hypotext: Not to be confused with its use on the web, this is the quality of a story that is “based on” another story — not just in terms of copying it, but in terms of following it, being based on it, and adding to what it is saying.The story following is the “hypertext,” and the story it is based on is the “hypotext.”

But most stories that are “derivative” of something else can be seen as hypertexts, whether they come out and state they are based on it or not — and whether they have a right to be based on it or not. It isn’t really about ownership or ability to form a tradition yourself. It’s about the relationships among the art objects that exist.

And it casts a really wide net. There are lots of different kinds of hypertextual and hypotextual relationships. It’s a big category.

What isn’t a “hypertext” is a straight-up commentary on the previous work. So Mystery Science Theater 3000 episodes are generally not hypertexts of the bad movies they are built around. This restriction is just by Genette’s definition, and its validity is debatable.

So, when we regard Emmet and the father and son in the real world (“The Man Upstairs” and “Finn”), we find out two things about Emmet’s quest to become the Special:

– The portion of the movie that includes the lives of these “real people” is a meta-lego that is “about” Emmet’s story — we are reminded that Emmet is literally made of building blocks, that these are the people playing with them, and that the story we are watching is a story made up mostly in the mind of this young child — and we get to see the story of how it is made up.

The meta-lego also a reminder that the sense of fun we derive from The Lego Movie is based on remembering childhood play — that our relationship with Emmet is similar to Finn’s relationship with Emmet — and we’re reminded of the part of ourselves that is imaginative in the way this child is being imaginative while telling the story of Emmet’s life. It’s about us watching the movie, and to what degree we are the father figure and to what degree we are the child.

– But that’s not all (and this is the part that I think is a bit trickier) — we also find out that Emmet’s life is a hyper-lego that is based on the story of how The Man Upstairs built a giant Lego installation in his basement, didn’t let his son play with it, and planned to glue it all in place with Krazy Glue (the Kragle) once he had it exactly as he wanted.

You Can’t Call Me Al-legory

As a side note, Emmet isn’t really a reflection of Finn — Finn appears to be telling this story because he wants his story to have a hero and the heroic stories he knows have stupid prophesies in them that aren’t credible at all but still motivate random donks to step forward to prove their excellence, a la Dragonball: Evolution or Street Fighter: The Legend of Chun Li.

So, Emmet is a parody of the latter-day nonsense that is “watered-down Joseph Campbell should be in every movie.” Emmet is also a sales pitch for Legos — “Everything is Awesome” is an echo for “Everyone Can Be ‘the Special.'”

There’s a whole separate conversation to have on the gaps between the text and the metatext — the parts of Emmet’s story that Finn the child can’t credibly have “told” (would a child this young really be troubled by the lack of variety on a radio station or be this aware of the smarminess of Billy Dee Williams?).

My own take is that the Lego narrative represents Finn’s fantasy not just as he constructed it, but as he might be satisfied with it. Finn can merely imagine “an awesome scene where the Millenium Falcon shows up” (which he knows from Lego Star Wars, no doubt), and we then get to watch that scene be awesome in the spirit that Finn might think it would be awesome, but not as Finn would script it, word for word.

To zoom in and out a bit farther, I created the following graphic, which tracks some of the metatext, hypertext, and hypotext surrounding this movie. A comprehensive graphic would be unfathomably larger, since The Lego Movie seems to be squeezed from a cultural sponge, having soaked up a deep and diverse pool of antecedents.

But I do think it’s worth noting that the movie seems to me connected in several to the cultural experience to Star Wars — particularly the success of Lego Star Wars as a test case for this sort of Lego narrative, combined with the well-known experience of parents of the generation that grew up with Star Wars showing both the original movies to their children and the subsequent prequels and Clone Wars cartoons, with sometimes unexpected or sublime results similar to those in The Lego Movie.

You’ll also note a friendly face bookending this that in my mind identifies the movie’s most obvious influence — one that maybe didn’t succeed in achieving the childlike level of playfulness in this movie, but one that did have the advantage of not being quite so committed to selling a specific product: The Neverending Story.

Credit for Falkor the Lego Dragon goes to Carl Merriam by way of The Brothers Brick.

4 Comments on “The Lego Movie: Are We Lego, Or Are We Meta-Lego?”