Yeah, I’ve been away from Overthinking It for a while, writing books, making websites and Twitter accounts and such. But like the mob bosses always say, just when I thought I was out, they pulled me back in. “They” in this case being the writers of Adventure Time, because HOLY HELL is this show overthinkable. In my opinion, it’s the most overthinkable show on TV right now. Mad Men might come close, but it has less autotune and fart jokes, so advantage Adventure Time.

I’ve heard it said that East of Eden is a Great Book because it simultaneously works on a bunch of different levels. It works as a family epic, a religious allegory, a philosophical treatise, a discussion of America with a capital A, and so on. Similarly, the recent Adventure Time episode “All the Little People” has at least five levels of textual depth. It works as

You can find explanations of all five readings elsewhere on the Internet, but let me go through them quickly before we move on what is, in my mind, a much more interesting discussion about how all five readings work together and how they work within the context of the series as a whole. If you’re already familiar with the five readings, you can skip my summaries and go straight to the analysis. 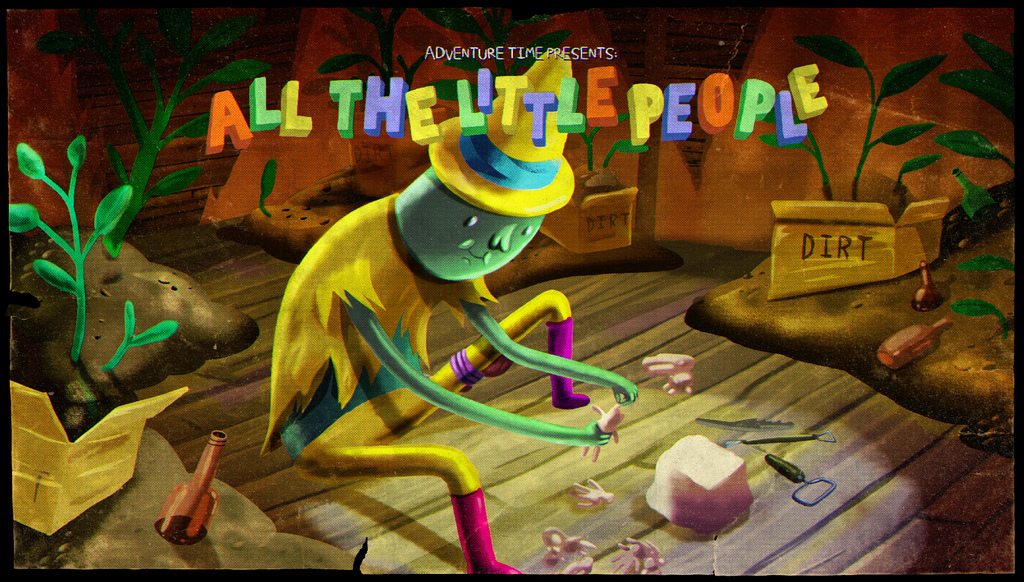 “All the Little People” begins with Finn the Human and Jake the Dog hanging out in a post-apocalyptic landscape and having a discussion about love. Along comes Magic Man, the biggest jerkface in Ooo, who slips Finn a bag filled with small magical dolls. Each doll represents a character on Adventure Time, and while they aren’t exactly intelligent, they can interact with each other in interesting ways. While Jake is off with his pregnant girlfriend, Lady Rainicorn, Finn plays with the semi-sentient dolls, putting them into various romantic configurations to see who will hook up with whom.

Finn, as he is wont to do, becomes obsessed. For sixteen weeks he forces the little people to make out with each other, and they are miserable. Finally Jake comes home, sees that Finn has become a scary otaku hermit, and Finn realizes he has to apologize to the little people and stop this god game he’s been playing. Big Finn figures out a way to communicate with Little Finn so all the little people know they are free of his interference, and the little people have a dance party to celebrate. 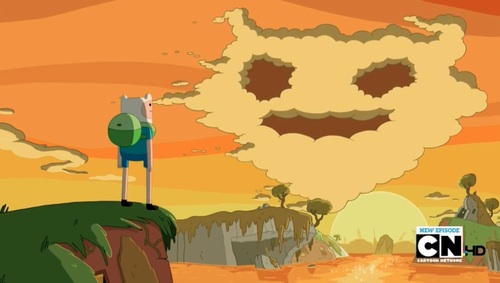 Interestingly, when Big Finn talks to Little Finn at the end of the episode, he tells Little Finn “I’m not coming back,” which is exactly what Magic Man told Big Finn at the beginning of the episode. So there’s a suggestion that, just as Big Finn acts as God to Little Finn, Magic Man is God to Big Finn, which makes sense, seeing as Magic Man actually has a relationship with Grob/Gob/Glob/Grod, the four-faced deity of Ooo. So in Adventure Time there are at least three layers of reality: the supernatural reality of Magic Man and Grob, the regular world of Finn and Jake, and the mini-universe of the little people. 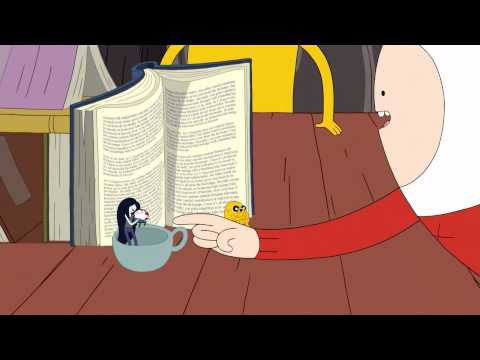 3) A meta-story about Adventure Time’s writers

Of course, we all know there’s a fourth layer of reality on top of those other three layers: the reality we the viewers live in, a world in which a human man named Pendleton Ward created a strange, wonderful little show about a post-apocalyptic Candy Land that somehow is airing on basic cable. Remember, in “All the Little People,” the god of each reality layer ruins the lives of the people living in the layer underneath them: Big Finn destroys the lives of Little Finn and his friends, Magic Man gives Big Finn his second nervous breakdown of the season, and the Adventure Time writers make all the characters on the show miserable.

Luckily, at the end of the episode, all’s well that ends well, and all the little people are enjoying themselves at a dance party. It’s as if Adventure Time’s writers are apologizing to their characters for involving them in so much romantic angst and psychological torture over the past few seasons. “Only dance parties and wackiness to come!” the writers seem to be saying.

4) A meta-story about Adventure Time’s fans

Yet “All the Little People” remains a controversial episode of AT, mainly because some view it as an indictment of the show’s fans. Although I don’t think this is the most important reading of the text, the reading’s certainly there for the taking. When Finn forces different characters into threesomes, S&M situations, and hurt-comfort scenarios, it’s hard not to see it as a clever eyebrow raise toward those overzealous fans who write crack-pairing fan-fiction and create disturbing fanart. And when Jake reminds Finn that it is sometimes healthy to get out of your pajamas and leave the house, it’s hard not to see it as a sly dig at those of us who spend our free time writing ridiculous textual analyses of cartoon shows for children. 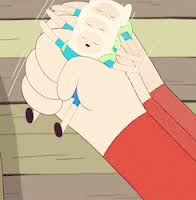 Under this lens, “All the Little People” becomes a story about a teenage boy who

Poor Finn. Someone get that boy a shrink, stat.

So there you are. Five readings of one 11-minute episode. But how do we put them together? What are the writers really trying to say here?