On our final Breaking Bad recap, Fenzel asked us what Breaking Bad is ultimately about: the moral of the story, if you will. I gave a rambling answer that I intended to sound as pithy as the following:

If you do the thing you’re best at, America will reward you, especially if you’re better than anyone else, but you might not like the reward once you get it.

The idea that we can follow our most fulfilling talent and succeed is the core of the American Dream, and the consequences of it are why Breaking Bad is about the American Dream’s failure to satiate. I’ve talked about the latter part at length – how the material success delivered to Walter White does not alleviate the hole in his spirit. But let me devote this, my last look at Breaking Bad (I swear, guys, I’m done after this; I’m locking myself in a trailer and going clean), to the former: the act of following one’s dreams, or living up to one’s talent; the art of process.

“I did it for me,” Walt confesses to Skyler in “Felina” (S5E16). “I liked it. I was good at it, and … I was … really … I was alive.” He clearly doesn’t consider that compensatory for the harm he caused to Skyler, Flynn, Marie, and Hank – he’s too self-aware at this point – but he considers it a sufficient reason. All of the people he killed, the people he addicted, the lives that were upended or ruined to cover for his secret: all because he found something he enjoyed and excelled at, all for that Nietszchean joy of exertion in itself. The gulf between the innocent simplicity of the cause and the magnitude of the effect force us to pay attention.

What does it mean to enjoy doing something – to enjoy process – that much?

Crime films have always had a special fascination with process. As law-abiding citizens, we can’t step into the world of desperadoes, but we’re curious. We envy their freedom, we enjoy teasing the dark side of our spirit, and we wonder if we would have the stones to succeed. The easiest way to satisfy these urges is through a focus on process. How do criminals succeed? Yes, they have a will to defy the conventions of polite society, but we’d like to believe we’d find the same will if push came to shove. Yes, they have connections, but that’s not very fun to watch. What they also have is a process: a series of steps that they undertake, in a precise order, that gets them results.

As an audience, we’d like to believe that the most successful criminals succeed because they’re masters of the process, devoted to it like medieval Japanese craftsmen or Renaissance artists. In the real world, there are very few “successful” criminals – most do multiple stretches in prison, give up early, die young, get other people to do their dirty work, or are exceptionally lucky. Skill has relatively little to do with it. But this is the fantasy we’re sold: precision, passion, excellence.

(I should caveat that the fascination with process isn’t specific to crime films. It’s a feature of any film that depicts a world that we fantasize about but can’t afford to enter. From the Sex and the City shopping spree to the martial arts training regimen, we vicariously experience a more heroic life than our own. This is most often accomplished in a montage – a series of foreign, goal-oriented tasks shown with a musical backdrop and artful camera work. It’s entertaining as well as transportive)

As much as Breaking Bad is famous for its nuanced performances, its inventive cinematography, and its bleak moral outlook, it also draws in fans for its montages – montages about process. Whether it’s Hank poring over a box of evidence or Walt and Jesse turning methylamine into blue rock, the show wants us to fall in love with the process. There’s the tight camera focus on hands entering and exiting frame, machinery bubbling and pumping, and seconds turning into hours as you get lost in the joy of work. Walt obviously doesn’t hear “Crystal Blue Persuasion” as he cooks meth, and he doesn’t stare at the machinery in fascinated, high-res detail. But he clearly finds it just as fascinating as if he did. Breaking Bad is famous for its montages because the show wants us to think about process. We may hate or fear Walt, we may pity Jesse, but we’re supposed to love the cooking.

An obsession with process is a defense – or at least a defensive ritual – against chaos. If I follow all the steps to the nth degree, nothing bad is going to happen. When Walter White feels vulnerable, he obsesses over uncontrollable variables – the presence of Gale, the invasion of a fly, the unknown intentions of Gus. He is obsessed not just with cooking meth, but with cooking impossibly pure meth. When you consider that he’s operating in a market where 50% purity will do you just fine, this obsession should strike you. Cooking to 99%+ requires, conservatively, ten times the effort of Jesse and his “chili P”, and brings with it ten times the attention of competitors, greedy consumers, and law enforcement. But anything short of perfection – especially when perfection is within reach – leaves you open to chaos. This is an irony we’re meant to savor, in that it’s Walt’s quest to cook meth better than anyone that earns him the attention of Tuco, the cartel, the DEA, Gus, Madrigal, and the Nazis. The ritual doesn’t protect him as well as he thinks.

This, then, is the problem with the obsession on process: it blinds you to the outcome of the process. If you fetishize the process – you believe following the process guarantees the result, protects you from harm, and is a substitute for the lifestyle – you no longer pay attention to consequences. You get into the “just following orders” mindset. You get so deep into the meditative process that you not only fail to realize that the house is burning down around you, but that it’s your incense that’s doing it.

I don’t know that there’s necessarily a moral or a takeaway from the show; I don’t know that Vince Gilligan’s trying to preach to us. But it doesn’t take much searching for real-world examples of allowing an obsession with process – being the best in a narrow field – to blind people to the consequences of their actions. When that happens, you start thinking that liking what you do, and being good at it, is good enough. 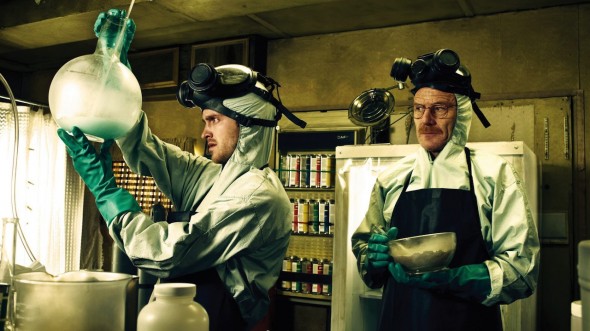 One Comment on “Breaking Bad: The Process is the Product”