Mad Men and Breaking Bad, the most critically acclaimed dramas on AMC, are two shows about the same thing: the failure of the American Dream to satisfy.

The “American Dream” is one of those vague phrases that means whatever the speaker wants it to mean, either in a positive connotation (as spoken by men running for President) or a negative connotation (as spoken by book critics). But compare the various contexts against each other and the American Dream boils down to one core: if you work hard, you can get anything you want. This is the story told to 18th century tenant farmers and 19th century immigrants, schoolboys who want to be basketball players and schoolgirls who want to be movie stars.

The 20th century is sodden with books and movies critiquing this notion, challenging the idea that hard work can triumph over ill fortune, prejudice, or the obstinacy of old money. Read Upton Sinclair, or John Steinbeck, or listen to Woody Guthrie, or watch Giant (I can keep going). These are stories of men who can’t get everything. But you don’t see as many stories where someone achieves the American Dream and yet is still left hollow – at least not on TV, and not as well as Mad Men and Breaking Bad have.

Mad Men may be the edge case here, because it’s not clear that Don Draper, a/k/a Dick Whitman, is getting everything he wants. Depending on which season you catch him in, he seems to have everything he wants already: a lovely home, a gorgeous wife, beautiful children, a well-paying job that affords him every luxury in an office surrounded by coworkers who do nothing but drink with him, sleep with him, and tell him how awesome he is. The identities of those people change between seasons, but the model doesn’t. And yet it’s never enough.

Don Draper works hard, gets everything he wants, and yet remains detached from the world. The problem isn’t that getting everything you want spoils you or deadens you. The problem isn’t even that Don Draper wants something that he can’t have. The problem lies in the nature of wanting itself. Don gives voice to this in the dramatic climax of the very first episode (S1E1, “Smoke Gets In Your Eyes”): “What you call love was invented by guys like me to sell nylons.”

The advertising industry is built around telling people what to want. Don Draper is perfect in this role because he hates his past so much – raised in a whorehouse, raped as a gawky teen – that he steals a dead man’s identity to escape it. He has no self, no core; he has no wants of his own. Other characters have wants that are being blocked by social expectations (Peggy) or the limits of their own competence (Pete). But Don doesn’t. He is an empty vessel into which wants can be poured. This is what makes him such a great ad man, so in tune with the pitch and hum of marketing.

The problem is he’s an empty vessel with a hole in the bottom. As quickly as wants are poured in, they flow out again. This becomes increasingly obvious to everyone but Don. Betty realizes it in S3 and divorces him. The partners realize it in S4, when Don announces he’s marrying his secretary (Roger: “who the hell’s that?”). Peggy realizes it in S5, when she quits SCDP. The partners really get it in S6, when they furlough Don; his daughter Sally realizes it, too.

That, then, is the last bit of drama life has in store for Mad Men: will Don discover something healthy, constructive, and attainable to want in S7? Or is he too far gone to save?

Walter White’s problem isn’t that he can’t get what he wants; it’s that he constantly gets what he wants. His wants, unfortunately, have all been instilled in him by popular culture, the effort of three generations of Don Drapers. He wants the black hat and the goatee. He wants the shootout with the rival gang (witness him practicing a quickdraw from his waistband in S4). When he’s told he can’t keep his car, he wants to set it on fire and walk away from it in slow motion. He cackles with his son over the shootout that closes Scarface. None of his wants originate from the true, honest core of his being – or those wants which do come from there are very petty.

Even as Walter realizes what he’s getting isn’t satisfying him, though, he never abandons it as an excuse. He clings to the claim that he’s protecting his family even as it becomes obvious that he’s more of a danger than a savior. The millions he’s getting aren’t enough to keep him from eyeing Gus’s neck. If Walter walked away when he had a few hundred thousand, if he walked away when he had a few million, if he walked away after Gus Fring was dead, the show could have a happy, peaceful ending.

But just as Don’s speech about nylons exposes the core of his hollowness, Walter’s speech to his class in S2E6, “Peekaboo,” exposes his. Walter is a man who wants credit.

The man who invented the diamond. Alright. H. Tracy Hall – write this name down. Dr. Hall invented the first reproducible process for making synthetic diamonds. I mean, this is way back in the 50’s. Now today, synthetic diamonds are used in oil drilling, electronics, multi-billion dollar industries. Now at the time, Dr. Hall worked for General Electric and he made them a fortune. I mean, incalculable. You want to know how GE rewarded Dr. Hall? A $10 U.S. savings bond.

His anger with Gretchen in that same episode, who exposes the lie that she and Elliott have been paying for his cancer treatments, stems from that same desire. Walter wants to be recognized. Every time he gets an “out” from having his crimes exposed – Walt Jr’s charity website; Hank pinning the crime on Gale Boetticher; Skylar treating him with sympathy, even after knowing what he’s done – he ruins it because he’s not getting enough credit.

The problem with this desire is that this, too, is another hole that can never be filled. How much credit is “enough” credit? Mexican cartels, dealers throughout the Midwest, and the DEA all know Heisenberg’s name. But he still needs to hear some random scumbag say it. So long as Walter White runs into one ignorant asshole who’s never heard of blue meth, it will rankle him – and it will provoke him into self-destructive action.

The American Dream – work hard, provide for your family, and success is yours – is, for Don Draper and Walter White, a mask. It allows these two sociopaths to act out their urges, oblivious to the people they hurt. Most importantly, it allows them to blend into civil society. They can claim that their impossible hours, their fits of drinking or moodiness, their short tempers, their tendency to vanish without explanation, are all done to put a roof over their family’s heads. Thanks to this, they get away with their crimes for a lot longer than an unmarried man might.

If I’m still not being very clear, consider this: if Mad Men ended sixty seconds before the finale of S6, or if Breaking Bad ended thirty seconds before the final shot of S4, they would be happy endings. Instead, we get those arresting images – “are you alone?” / the slow pan to the lily of the valley – that prove our heroes aren’t satisfied with getting the American Dream. Money, power, family; even if that’s all they ever wanted, it doesn’t satisfy. The camera keeps rolling. And since no human being outside of a TV show gets to say “roll credits!” when they get what they claimed to want, either, maybe we should find that instructive. 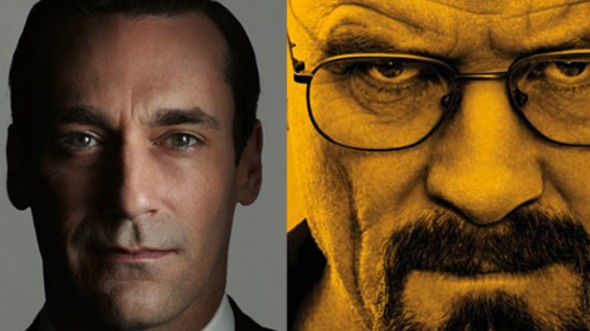 5 Comments on “The Hole in the Middle: Mad Men and Breaking Bad”