It’s not exactly a revelation to observe that Hollywood is overrun with sequels, prequels and reboots – the economics are simply too powerful. When you have a built in audience, it’s far easier to get butts into seats. This has led to the rise of a particular kind of narrative – the “Evil Origin Story.” The formula is (theoretically) simple: take an iconic villain that people already love (to hate) and explain how they got to be that way.

Most recently, we have “Oz: The Great and Powerful.” While primarily a story about how Oz became the Wizard, it’s also a story about how a Princess, Theodora, becomes the Wicked Witch of the West. This part of the story is very much in the mold of the the Star Wars prequels, which were, in large part, the story of how Anakin Skywalker became Darth Vader.

“Oz” itself is actually a pretty good movie overall, but the “Witch Becomes The Wicked Witch” plotline is by turns reductive, misogynistic and unconvincing. Without really leaving anything out, the story is: 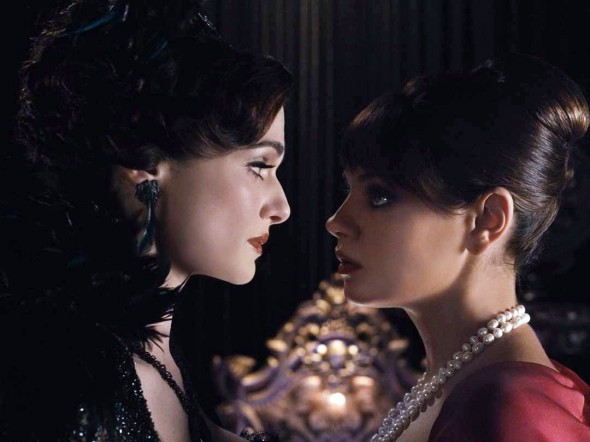 That’s it. No deep relationship building, no psychology, just an evil golden apple. The apple, by the way, comes out of left field – it’s never mentioned before the scene in which it’s eaten, we don’t know why it’s evil or how it works, and we never really learn why Evanora had it in the first place. The story of Darth Vader is a little better in the prequels, but only a little. Here, I’ll talk about why I think that is and why I think these stories so completely miss the true roots of evil.

I’ll start by discussing a little bit about what makes great villains in the first place. In their original incarnations, both the Wicked Witch and Darth Vader are somewhat implacable evils. They can’t be bargained with, persuaded or scared way from accomplishing their nefarious ends. Their internal motivations are deliberately obscured in the original property – Darth Vader wants to destroy the Rebels, and the Wicked Witch wants those ruby slippers; we don’t really need to know why. That’s just who they are – like the scorpion that stings the toad, “It’s in my nature.” Many of the best cinematic villains fit this mold – Hannibal Lecter is scary in part because he just is – there’s no real way to explain why a sophisticated genius would start eating people (which is also why the prequel TV series was also rubbish.)

A great villain often has a distinctive voice and physical appearance as well. The Wicked Witch has the green skin, the cackling voice; Darth has the black cyborg suit and the respirator. These characteristics set the villain apart from the rest of humanity, moving them just a little bit further down into the uncanny valley. The import of these physical characteristics is underlined by the in-universe conception of good vs. evil – we’re led to believe that the “Dark Side” of the Force has a physical reality. Darth Vader doesn’t just do evil things – there is something real that sets him apart as evil.

Unfortunately, these same characteristics set the would-be prequel writer up for failure. Implacable is pretty close in meaning to “unexplained.” An evil that you can’t negotiate with is probably also an evil that lacks a rich internal life. That lack of empathy is unimportant when the subject is your movie’s antagonist, but is disastrous when you’re trying to move them to center stage. Similarly, the distinctive look of a villain makes an “origin story” writer’s job even harder. Now we need a single story that explains TWO things – how a good person became evil and how a person of normal appearance became deformed. There are of course, ways of doing this, but it represents an additional hurdle for a writer to jump over.

In the end, most of these stories are simply unconvincing. For an implacable and unabashedly evil evil villain, it almost impossible to create a origin story that both a) makes the audience empathize with the future villain and b) portrays a convincing transformation. In Episode III, Anakin jumps pretty much straight from “arrogant but still good Jedi” to “murdering children in cold blood.” Oz’s transformation of the good witch is even more abrupt – she just kind of decides that if she can’t have the boy she likes, she might as well eat this evil apple.

The problem with these origin stories isn’t just that they’re generally not very good (though they’re not) – they’re also misleading and morally dangerous. They are entirely reductive – in both cases, the message is basically “broken heart = evil.”

The underlying motivation of these origin stories is that evil must have a readily identifiable cause. This is of course a comforting story – we want to believe that it’s something we can harness or control. We want to believe that it’s something that we can avoid – if you don’t want to be wicked don’t eat the golden apple. If your boss asks you to murder a bunch of younglings, he’s probably a Sith Lord. We see otherwise good people turn completely evil at the drop of a hat; but that’s just not how evil works. Even the most evil people are almost certainly not that way because of any one identifiable cause; it’s a death by inches, made up of years of little choices and injustices. 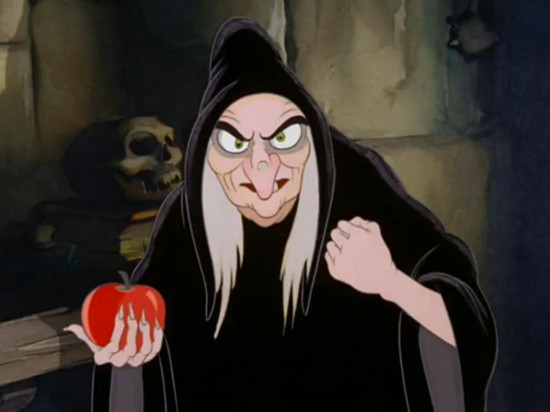 DARE to keep kids off apples.

The problem with this narrative is apparent in our political discourse around evil people and evil events. In the wake of the Columbine attacks, a number of “causes” jumped into the public imagination and influence the dialog. Some argued that the two killers were just bullied kids, lashing out at the “jocks.” others pointed to the effect of violence in the culture. The two killers had come from ostensibly “normal” families, and so people searched for some reason, some cause; we want to go to bed at night and think “Well, I don’t let my kids play violent video games, so I’m OK.” Tiny details of the two killers lives got blown out of proportion, and the narrative quickly lost any touch for reality. If you’re interested in a chilling and sober look at the tragedy, I’d recommend David Cullen’s Columbine, which attempts to explains both the killer’s motivations and how the story got so badly misreported in the wider culture. [Ed: I originally had the name of the author wrong; thanks user “Meggie” for setting me straight!] Ultimately, there’s not one reason why two teenagers just up and decided to pick up guns and murder their classmates – if anything, the two boys were bullies themselves, and while they played violent video games, there’s no real evidence that it was anything but a idle time waster for either boy. In the end, all we know is that these were two deeply, deeply troubled individuals who made an almost incomprehensible decision.

Of course, there’s another, far more common form of evil  – the banality of evil. Real life villains generally don’t have cackling voices or a black death-helmet. They don’t even think of themselves as being particularly evil. Real life villains don’t call themselves “Darth Dictator” or the “Wicked CEO of the West.” Most evil is just people going on with their lives, either oblivious to or uncaring about the consequences of their actions.

Even the truly evil, the Eichmanns of the world, will probably tell you that they’re “just doing their job.” You don’t start off killing children with the light saber – you make a compromise, and another, and another, and maybe you wake up one day to realize that you’re evil, but evil origin stories are banal. The great dictators of the world can’t be explained by a broken heart or a magic spell.

Ultimately, most evil origin stories do the audience a disservice. For the most part, I don’t WANT to know why my villains are the way they are, I just want them to bad awesome. The Joker in Dark Knight illustrates this perfectly when he gives multiple conflicting accounts of how he got his scars: he creates an origin story just to mess with his victim’s head. He doesn’t have a motive or a cause, he just wants to watch the world burn. I don’t need to see Darth Vader when he’s a little kid or Hannibal Lecter as a whiny teenager. I don’t need to know why he’s an unstoppable killing machine; I just need to know that he is an unstoppable killing machine, and try to figure out how to stop him.

Or read more from… Featured, Movies, evil, oz the great and powerful, Star Wars, The Dark Knight, the wizard of oz

44 Comments on “The Banality of Evil (Origin Stories)”