I have an odd fixation with Google Zeitgeist. I’m totally fascinated by this unprecedented ability to quantitatively collect information on people’s information interests, and at the same time I’m disappointed that the insights that we gain from these snapshots are so banal and unworthy of the idea of a “zeitgeist.” In 2011, I complained about Rebecca Black’s presence at the top of the list (remember her? Took you a second, didn’t it?), and in 2010, Chatroulette (remember, that thing where strangers on the Internet showed you pictures of their junk? Took you more than a second, didn’t it?).

I can’t quite make the same complaint in 2012, given that the far-from-ephemeral music legend Whitney Houston is at the top of the list. So instead of rehashing my old complaints against Google Zeitgeist, I’m going to use a different analytical approach to the data: what if we compile Google Zeitgeists over many years? Would that shed any new light on either Google Zeitgeist itself, or dare we say, the actual spirit of our times?

My first step was to compile the last 5 years of Google Zeitgeist Top 10 Trending Search Terms and assign each item to a category: 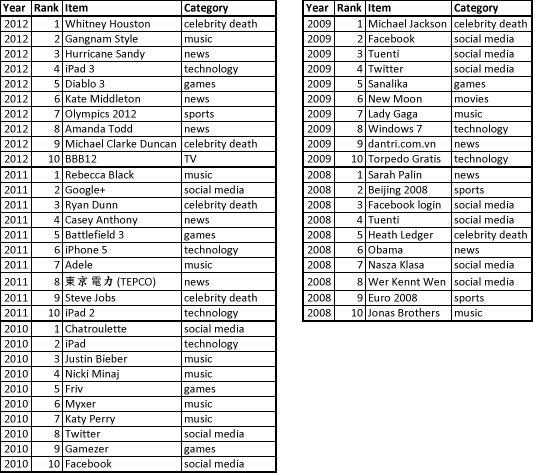 A few things to keep in mind regarding these lists:

Here’s what the data looks like when you aggregate across the years, by category: 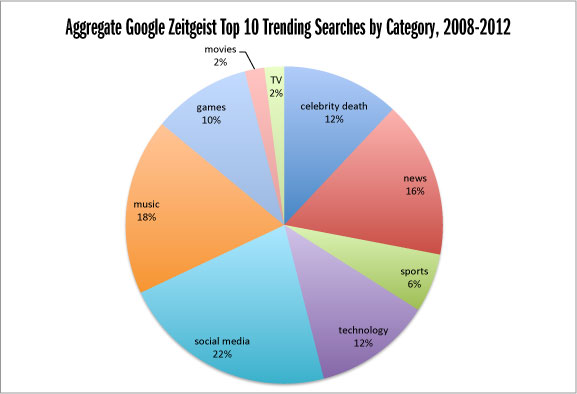 All fine and good, but what we really want to see is if there are any changes in search interests over the past five years: 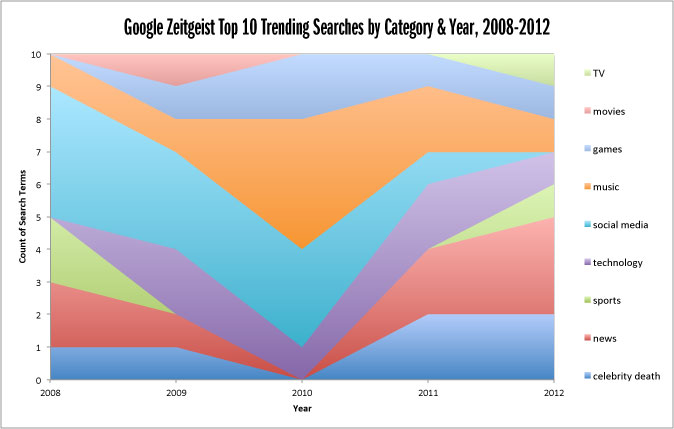 So what do we make of this? Here are a few possible takeaways:

To me, the biggest surprise in this exercise was the tailing off of social media searches. As a reminder, it’s not because the total volume is declining; it’s because the year-over-year growth in searches isn’t enough to get these terms into the top 10. Still, if my theories are right–that social media is approaching full saturation and that the usage of it is moving towards mobile devices–then we do have a finding that approaches the idea of a “zeitgeist” in the traditional sense of the term: “the defining spirit or mood of a particular period of history as shown by the ideas and beliefs of the time.” Social media–this potentially radical revolution in how humans interact with each other–not only became a “new normal” over the past five years, but is also undergoing a radical shift from the stationary computer screen to the mobile, always-on-you device. And if this radical reinvention of the radical reinvention isn’t reflective of the zeitgeist, I don’t know what is.

One last thought on the nature of Google Zeitgeist itself: I wondered if I was imbuing it with outsized importance by assuming that the Google Zeitgeist is more of a part of the popular imagination (the zeitgeist, if you will) than it actually is. To find out, I asked, well, Google:

Over the last five years, Google Zeitgeist has remained a popular year-end search term, though not with any consistent growth or shrinkage in popularity:

That being said, it’s still dwarfed by other popular search terms like “iPad” or “Michael Jackson.” Even “lolcats,” a niche but once-hugely popular internet meme, has towered over Google Zeitgeist over the past 5 years:

Granted, the gap has narrowed recently as searches for “lolcats” has declined while “Google Zeitgeist’ remains more or less consistent, but the point should be clear: the Google Zeitgeist itself is far from a cultural juggernaut compared to the items it contains. It’s not surprising, but it does provide some needed perspective on the matter.