Last year, I published a diatribe against Google Zeitgeist and how it plays fast and loose with the definition of “zeitgeist.” I argued that rather than “capture the defining spirit or mood” of the times, Google Zeitgeist audaciously and erroneously presented the aggregated search activities of its users as the spirit of the times. Not as ingredients or specific examples of larger social trends that make up the zeitgeist, but the zeitgeist itself. The fact that “Chatroulette” was the number one entry on their list was strong evidence in support of my argument. As far as ephemeral and ultimately inconsequential internet crazes go, it’s hard to top Chatroulette.

Unless you’re Rebecca Black, the accidental YouTube sensation, and the number one entry in 2011’s Google Zeitgeist: 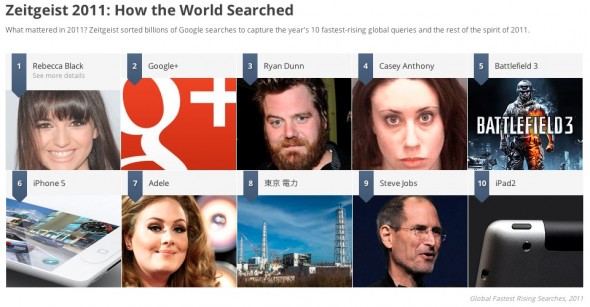 I’m sorry. Did you forget that Rebecca Black and “Friday” happened? Let me remind you:

In a way, I suppose that the dilemma of choosing between the front seat and the back seat is indicative of the great policy split of our era between advocates of government intervention in macroeconomics and advocates of a more laissez-faire approach. In a way.

Keynes vs. Hayek: which seat should I taaaake?

But in all seriousness, it’s clear that, once again, the Google Zeitgeist is anything but a zeitgeist. It doesn’t represent the true spirit of the times; it just represents what people search for on the internet (celebrities and technology news, plus a horrific disaster thrown in for good measure). But it does represent something significant, given the ubiquity of Google and its position as the first stop for many people on their way to other parts of the internet. So with that in mind, let’s use this as an opportunity to revisit the Rebecca Black “Friday” phenomenon, several months after its peak and likely at one of her last moments of relevance in pop culture. 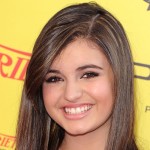 For those of you who lost interest in Rebecca Black several months ago, here’s a quick update on her post- “Friday” adventures. She’s released two other songs, appeared in the Katy Perry music video “Last Friday Night,” and even scored an endorsement deal with Australian telecom company Telstra. That’s the good news. The bad news is that her subsequent singles have seen diminishing success, much less anything close to the notoriety achieved by “Friday,”  and worst of all, she was bullied out of her middle school.

She was the most searched for person on the entire Internet, she appeared in a Katy Perry music video, and yet, she experienced the ultimate alienation that any young person could face: exile from her school and her peer group. In the same year. She went from complete anonymity to near-total ubiquity to the ash heap of history (or at least to its outer edges). In the same year.

It would be too easy to ascribe this extreme volatility to the fast-paced, zero attention span information age. That certainly is at play here, but what’s far more interesting (not to mention relevant to the ostensible topic of this article, Google Zeitgeist), is the accidental, serendipitous nature of the whole affair. Presumably, nobody sat down with a master plan to create a song/music video so terrible and yet so appealing that it would catapult a nondescript middle-school girl into worldwide fame and the top of a list of most popular searches on Google for the year. Technology allowed this accident to happen, but it’s still an accident. An exception that proves the rule that, in spite of oddball viral fads that produce huge sensations from the grassroots, our world views are still dominated by hegemonic influencers and tastemakers, just as they were in the days before the Internet.

Look at the rest of the top ten list.

Six of the top ten are essentially the products of huge corporate publicity machines: a major label musician (Adele), mass market technology products (Battlefield 3, Google+, the iPhone, and the iPad), and the man who ran one of the best corporate publicity machines of all time. The other three are essentially current event items: Ryan Dunn, the Jackass star who was killed in a car accident, Casey Anthony, the subject of a sensational trial, and the aforementioned Japanese tsunami/nuclear disaster.

Rebecca Black may avoid the seemingly inevitable fate of obscurity and go on to a long and successful career as a musician. But assuming she doesn’t, she will remain an exception, an accident, rather than a truly zeitgeist-defining moment.

Which was a very long way of saying what we knew along: that the Google Zeitgeist isn’t a zeitgeist at all.