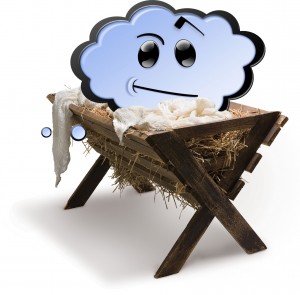 Merry Christmas from all of us at Overthinking It. We’re enjoying a little time off, and posting is going to be light(er) for the next week or so, but we didn’t want to let the holiday go by completely unoverthought.

Since the early days of OTI, we have been fans of off-beat verbal challenges, including the Ernest Hemingway-inspired six words meme. (I just laughed out loud reading back through those. They’re worth a look.)

Recently, we become aware of a new (to us, at least) arena for verbal dexterity, known as Mad Ape Den, the point of which is to retell a story in words of three letters or less.

“But it’s Christmas!” we thought. “Why retell just any old story when we can retell… the greatest story ever told?”

So as our gift to you this Christmas, here is our Mad Ape Den version of the Gospel according to Matthew 1:18–25. (For reference, you can find the original here.)

2 Comments on “The Not Bad News [Think Tank]”