Back in September, Belinkie sent the OTI writers an email about the fact that 28 million people had watched the season premiere of Two and a Half Men.  That led to the realization that Overthinking It, the site that subjects the popular culture to a level of scrutiny it probably doesn’t deserve, may not actually be paying attention to the genuinely popular popular culture.  Since we aren’t watching any of the most popular shows on TV, we decided to find out whether or not our readers were.

A couple of weeks ago, we asked “Are we out of touch with America?” The answer would seem to be “yes.”  Click through for charts of your responses and some verbatim replies to the open-ended questions.

Thanks to the 445 of you took the time to take the survey.  For those who haven’t, it’s still open – take it here. 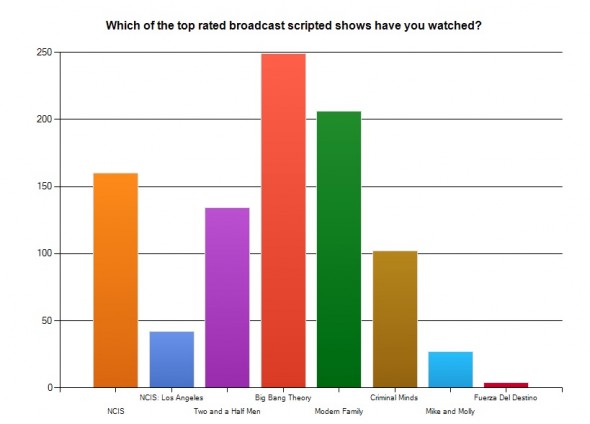 Clearly, I am not the only one out there who got a "D" in Spanish.

What do you like about Two and a Half Men?
The producers of these series (THM and BBT) have more than 50 years of experience in the comedy show world. They simply know how to make you laugh. Stupid, silly stuff is shown, and it doesn’t matter. I feel ashamed for their uncreative jokes, but I automatically laugh. And in the end, it feels good, provided I don’t think too much about what I just saw…

Don’t watch it “regularly” – more like “whenever ESPN’s not talking about football and I’m too lazy to turn off the TV”. 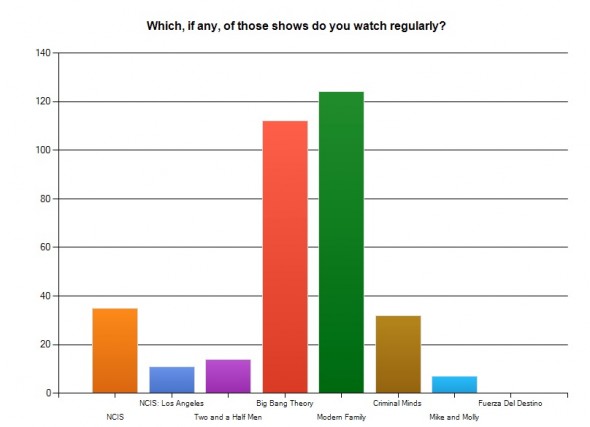 According to the comments about it, Modern Family is basically just like Arrested Development. If that's the case, why did AD fail while MF is one of the most popular shows on TV?

What do you like about Modern Family?
Modern Family is not Arrested Development, but it has a similar comic and narrative feel. It’s willing to do a smart joke that only 10% of the viewers will get and then move on.

Modern Family had lazy stereotyping to begin with, but is the closest you can get to the immoral, relentlessly evil/dumb characters and huge continuity of Arrested Development

Modern Family is the closest thing to Arrested Development you can find on TV.

It’s very well-written and acting is outstanding; it’s reminiscent of Arrested Development in many ways.

Dysfunctional family life. Like Arrested Development but popular for some reason.

Modern Family has an honest kind of delivery of some absurd behaviors or lines that I find hilarious.

“Modern Family is funny” seems like a simplistic and not helpful answer, but…it’s funny. It makes me laugh. The humor is more happy and joyful than most other shows. Also Phil Dunphee is delightful.

I watch them with my family.

Theyre funny. I laugh. That is all. 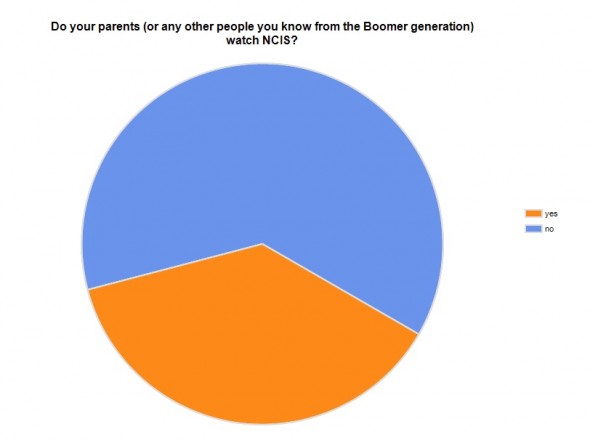 If it's not your parents, who's watching this show?

What do you like about NCIS?
NCIS may be a blandish procedural, but it fills the gap where I used to have Law & Order (also, while this season is not as good for it, the characters have entertaining depth – e.g. Tony DiNozzo’s knowledge of cinema would make him a worthy OTI contributor if you could find him off-duty). (Unlike, say,

I enjoy the formula of NCIS. Its comforting to know that every episode will be the same and you can focus on the characters.

I’ve fallen in love with the characters on NCIS, plus you can’t go wrong with a good crime drama.

For NCIS, it’s the way that the group dynamic is scripted; it’s almost “Whedon-esque”

It’s simple ‘shut-your-brain-off’ TV. NCIS has a nice take on character development and a formula that works perfectly well. A mixture of investigations and gun fights, I enjoy it because it does all my thinking for me whilst entertaining me at the same time. 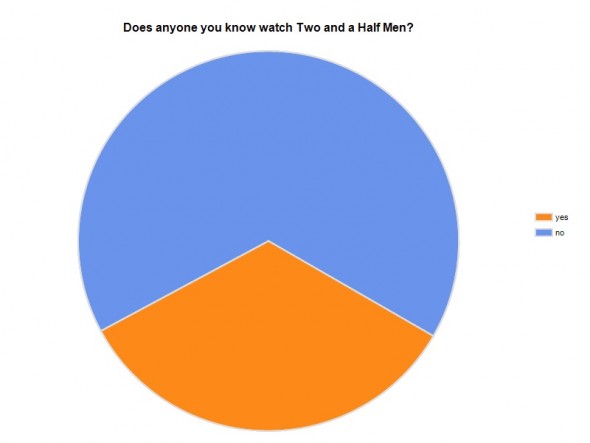 What do you like about Criminal Minds?
Criminal minds, I like because it shows you the point of view not only of law enforcement, but also of the perpatrator of the crimes. I think it’s a fresh take on the police procedural genre.

its on basic cable at roughly the time i’m sitting on the couch. so, convenience is really the word. oh, and joe montagna. he’s such a badass, have you seen thinnerer? that acid scene, it was like he was the inspiration for a taliban training video somewhere.

It’s on all the time and I can watch it while I farm for herbs in WoW.

Sometimes CM is so left field that it’s actually original. e.g.- The two episodes with David Carradine. How often does the woman run off with the serial killer?

First of all, amazing long-term character arcs. Second, giving victims agency and spending time with victim’s family. Third, 3/7 of the main ensemble are women (ignoring the nonsense of last season). Fourth, lasting physical consequences to stuff that happens (on at least three occasions – Reid’s leg, his drug addiction, and Hotch’s ear). Um… etc, etc? I could probably go on for ages.

Criminal Minds: More female characters than most crime/police procedurals; both female victims and non-victims have more agency than usual.

I watched Criminal Minds reruns for a few days, but decided the dark “arrive just too lately” was not as enjoyable as the CSI “arrive in the nick of time” formula. 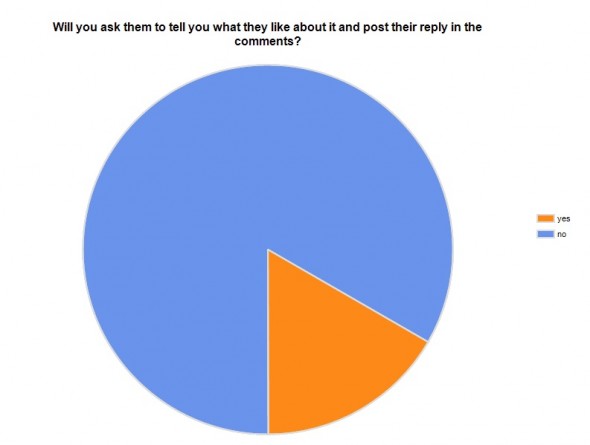 Well. That's just lazy. Thanks to the 60+ commenters from the original article who cared enough to phone home.

What do you like about Mike and Molly:
Because they are fat, though the show seems to have given up on making that mean anything.

They make you laugh without making you think. They are pure escapism.

bc I like rom-coms, and this is novel bc they are plus-size.

What do you like about Fuerza Del Destino:
No hablamos espanol. 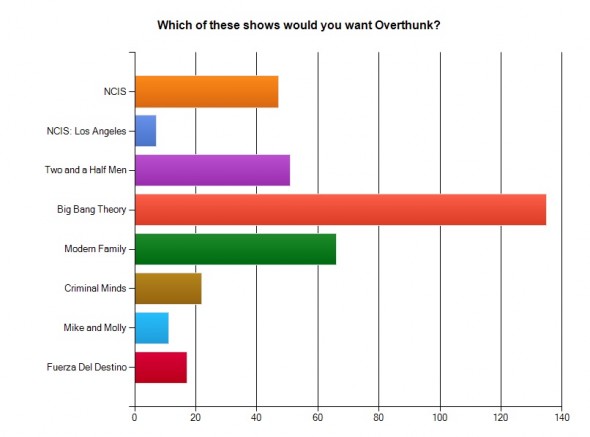 What do you like about The Big Bang Theory?
Big Bang Theory thinks a smart joke is made by taking a normal joke and adding smart-sounding words to it (often ignoring the true meaning of the words). It will then return to the joke to make sure you know that the writers used smart words and are, for that reason alone, much smarter than you are.

I enjoy the nerd culture on Big Bang. It’s like I am in on the joke… and the girl is hotish and ostensibly from Nebraska… oh and Blossom.

I live in hope of Big Bang Theory being a good advocate of geek culture. I am often disappointed..

Big Bang Theory: I’m a recent PhD, and having spent some of my time with Physics PhD, I find the jokes humorous.

I watch Big Bang Theory mainly for the character of Sheldon and also his incredibly absurd views on life and the comical way he expresses them. The other characters exist as foils to him as far as I’m concerned.

I like nerdy boys. My sister sort of got me into the show. The jokes are sometimes clever.

I like because it doesn’t have the same, average joe characters, that most sitcoms have; instead, they have people that are supposedly geniuses and that have the same types of problems of any other sitcom character, however the ways that they solve their problems are usually not average.

It manages to have extremely funny nerd characters without them being cheap stereotypes. It also does its research. I can’t remember it ever getting a geeky thing wrong.

It’s got a wealth of interesting characters (including three strong, smart women who aren’t just decoration) and doesn’t talk down to its audience.

I can’t make it through a full episode of Big Bang Theory. It really is geek “blackface”.

Finally, I want to thank all of you who answered the final “Why do you hate us?” question with: “no, no, I love you guys.”   For those that didn’t get my attempt at survey-based humor there, “Why do you hate us?” was the response to EVERY possible selection for “Which of these shows do you want Overthunk?”   We weren’t bashing these shows—we genuinely haven’t watched them.  If anything, we’re bashing the people who market them.

I’ll post some of the favorite responses to the “Why do you hate us?” question in the comments.   Special shout out to the one respondant who called us “pretentiois assholes” for our perceived dislike of NCIS: Los Angeles.

In the meantime, how should we Overthink the Big Bang Theory?   Overview-style commentary?  Statistical analysis of Star Trek vs. Star Wars references?   What do you think?

32 Comments on “We ARE out of touch with America: OTI’s POPULAR Popular Culture Survey Results”