[Warning: the following post contains SIGNIFICANT SPOILERS FOR A DANCE WITH DRAGONS. Your enjoyment of the book will be diminished if you read this article before finishing the novel. Don’t do it. Final warning.]

When George R.R. Martin gets his hands on a phrase that he likes, he gets as much use out of it as he can. Repeated phrases or images – Ned’s promise to Lyanna, the vows of the Night’s Watch, the motto of the Starks – are one of his favorite tools. It can get amusing if you look for the seams in the furniture, or even frustrating. But there is a key to the way GRRM uses repeated language and dialogue, and A Dance with Dragons (hereafter ADWD) is no exception.

But It Takes So Long My Lord, My Leal Lord

ADWD is the first Song of Ice and Fire novel that I read on the Kindle. This has several excellent advantages over traditional hardback or paperback editions. First, I can publicly read a book that has the word “dragons” in the title without bringing embarrassment to the Perich name. No one on the subway will know! Second, I can bring the book just about everywhere without putting undue strain on my spine. This saves my back muscles so I can hunch over a keyboard for hours, writing overthought articles about the book I just read.

But most important, reading ADWD on the Kindle lets me do a quick search to find every instance of the word “leal.”

Homage is the duty every leal subject owes his king. Yet your father’s bannermen all turn their back on me, save the Karstarks. Is Arnolf Karstark the only man of honor in the north?

You have my word, all that I desire is to be leal servant of your dragon queen.

I keep no secrets from my kin, nor from my leal lords and knights, good friends all.

Do you want to go with them, return to your bleak isles the cold grey sea, be a prince again? Or would you sooner stay my leal serving man?

You would do best to walk a middle course. Let men earn your trust with leal service … but when they do, be generous and openhearted.

Roose Bolton summons all leal lords to Barrowton, to affirm their loyalty to the Iron Throne and celebrate his son’s wedding to …

Those are just the first six out of fourteen. GRRM turned over a new page on his Word-a-Day calendar and got stuck. Fourteen times in one novel and, to the best of my recollection, never in the previous four. I don’t have those books on my Kindle to verify this with a search. But I had to look up “leal” to see what it meant and I’d have looked it up sooner if I’d encountered it before. 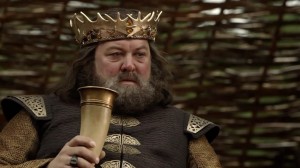 Are ya LEAL, mon?

The Oxford English Dictionary tells us leal means what we think it means in context: loyal, faithful. If it sounds like it’s just the word “loyal” with a Scottish brogue, that’s because it is: it’s a Scottish term, descended from old French and Latin, that’s filtered its way into English.

“Leal” means the same thing as “loyal” when delivered by a Scottish speaker. It probably got a lot of use between 1502 and 1707, after the wars between England and Scotland finally ended but before the treaty that established “Great Britain” was signed. But “leal” has passed into the English lexicon as well. And it’s typically used to mean something different from “loyal.”

It’s not just GRRM who does it. Take for instance Charles Dickens in his 1864 novel Our Mutual Friend:

He had not only settled it with himself in course of time, that he was errand-goer by appointment to the house at the corner (though he received such commissions not half a dozen times in a year, and then only as some servant’s deputy), but also that he was one of the house’s retainers and owed vassalage to it and was bound to leal and loyal interest in it.

“Leal and loyal interest.” While Dickens was certainly known for padding his word count, he’s drawing a clear distinction. To be “leal” is different than being “loyal.”

Creon, in Storr’s 1912 translation of Antigone, says this about loyal subjects:

Whome’er the State
Appoints must be obeyed in everything,
But small and great, just and unjust alike.
I warrant such a one in either case
Would shine, as King or subject; such a man
Would in the storm of battle stand his ground,
A comrade leal and true; but Anarchy–
What evils are not wrought by Anarchy!

Here, while a case can be again made for padding word count in the name of preserving iambic pentameter, the choice of words isn’t accidental. “Leal” and “true” signify two different behaviors.

For a final item, consider the traditional Scottish song “Land of the Leal.” It comes down to us solely as a poem by Lady Carolina Nairne, so any musical reproductions by a modern band are reinterpretations. But we know that it was a song because there are contemporary accounts of it being sung: Louisa May Alcott’s Little Women for one, H.G. Wells’s The Time Machine for another.

(if there’s a five-word phrase that gets more delightful with each successive word than “Scottish folk ensemble Silly Wizard,” I don’t know it)

The titular “land of the leal” is Heaven. The speaker is a woman on her deathbed, comforting her husband with the knowledge that she is off to Heaven, so dry your tears, you can come join me soon enough. In this case, reading “leal” as interchangeable with “loyal” doesn’t make sense. Is loyalty all it takes to get into Heaven? Loyalty to what? No, to vouchsafe your place in the clouds, you need to be not just loyal but leal.

Since GRRM’s the only person using “leal” in a sentence these days, we turn to him for context. In each use of the word in ADWD, “leal” describes a proper subject’s relation to his lord. Arnolf Karstark is a leal subject to Stannis Baratheon (or he at least claims to be). Tyrion professes that he’ll be leal if he can get to the court of Daenerys Targaryen. Young Griff, a/k/a the baby-swapped Prince Aegon, must scope out which of his men are leal and which aren’t. And so forth. 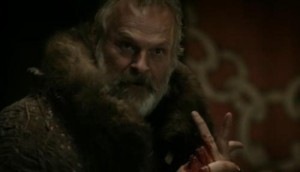 Perhaps I shouldna been sae LEAL.

It’s also worth noting that “leal” is not limited in geography, the same way the term is in the real world. No one outside of Great Britain or the English-speaking peoples would use the word “leal” today. But subjects from as far north as the Boltons’ keep and as far south as Dorne (Quentyn Martell) profess themselves to be leal subjects. A casual reader can write all of Westeros off as “fantasy England with zombies and dragons,” but Dorne, the Stormlands, the Riverlands and the North are vastly different nations. While the lords of the North may be the closest analog to Scots that Westeros has, all lords of the Seven Kingdoms seek for leal subjects.

While we may tease GRRM for his archaic vocabulary, no writer worth his salt uses a word like that fourteen times in one book by accident. It’s a deliberate choice. So why is he using it? And why now?

ADWD takes place during a brief respite in the wars racking Westeros. The armies of the North have largely been scattered. The Greyjoy raiders are holding more territory than they’re taking. Stannis Baratheon has parked at the Wall, waiting for his opportunity. And across the Narrow Sea, Daenerys Targaryen has halted her march of conquest and is trying her hand at ruling. The pitched wars of A Clash of Kings and A Storm of Swords are over.

None of the major players think that the fighting is over, though. Everyone is gathering their forces and recovering. New offensives are about to be launched. By the time the book ends, many are already under way: Stannis is marching on Winterfell, Aegon has landed on Westeros, Meereen is under siege.

When war is underway, you inspire your bannermen to fight. But between wars, when you’re catching your breath, you look to see who’s still on your side. You sound out your vassals, punishing some and rewarding others. You want a sound army behind you when you ride out to fight again. You want an army full of leal men and true.

Men can be loyal to each other, but they can only be leal to a master.