With the new Conan the Barbarian movie coming out in about a week, I felt that it would be worthwhile to look at an oft-ignored aspect of the older Conan movies. Not only are the movies Conan the Barbarian and Conan the Destroyer politically charged, they’re also, despite being directed by John Milius, much more progressive than most movies released around that time. Specifically, I’d like to point out this series’ feminist, anti-racist and anti-theistic themes.

Feminism
The primary goal of feminists is equality between the sexes, and from what we can tell in the Conan movies, there are several cultures that have embraced this principle.

The character of Valeria is a perfect example of this: a woman who is every bit as competent in the art of war as any man, something that is not met with surprise or disbelief by anyone at all. When Valeria (Sandahl Bergman) meets with Conan and Subotai outside Thulsa Doom’s tower, both men draw their swords, treating her as a legitimate threat. A few moments later Conan exclaims “you’re not a guard,” due to the fact she was clearly snooping around. When she proposes working together, the men never question whether she’d make a handy companion. There’s not one “girl with a sword” joke at any point, and the fact that she brought a rope suggests that she’s thought out the operation more than they did.

When they actually do get into a fight, Valeria shows that she’s every bit the fighter that Conan is. When King Osric of Ophir hires Conan, Subotai and Valeria to save his daughter, there’s not a moment of incredulity, suggesting that gender roles aren’t as strict in Ophir as in modern times. In fact, the only real instance of sexism in the first film from a sympathetic character is when Max von Sydow’s Osric speaks of how his daughter found purpose with Doom’s cult, “as if I could not give it to her!” This is but a single line in 2 movies, and thus easily ignored.

Valeria is close to being strong female characters. She is a great warrior, brave and confident. Valeria has loyalty and intelligence, yet also has a death wish (as evidenced by her catch phrase “do you want to live forever?”). Plus, as a thief, she does have some moral imperfections. If it weren’t for her death just before the third act, she’d make it all the way to Strong Female Character on the Female Character Flowchart, rather than settling for being stuffed in the fridge. 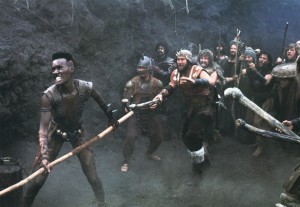 Grace Jones’ Zula in the sequel is similarly treated as a competent warrior, save for an embarrassingly bad joke where she acts afraid of a mouse. Zula isn’t as developed as Valeria (a fate all the characters in Destroyer share) but while being portrayed as a hero who eventually becomes Captain of the Guard, she’s also a bit too excited about killing people, and cold to the point of nearly being psychopathic in her interactions. This blend of strength with imperfection gives her more depth.

And, while neither Zula nor Princess Jehnna are as strong as Barbarian’s Valeria, they do make Conan the Destroyer the only fantasy movie I’m aware of to pass the famous Bechdel test. They have three conversations, the first two of which are about how to get a man. In the third, however, Princess Jehnna appoints Zula as captain of the guard. She smiles and accepts. This short bit of dialogue is actually revolutionary when put against the backdrop of the blatantly misogynistic barbarian films that came after Conan, like Deathstalker, Beastmaster and the Barbarians.

Some feminists might mention the nudity and the objectification of women in these films, especially in Conan the Barbarian. I’d counter that with two observations.

First, Conan (Arnold Swarzenegger) himself is at least as objectified as any woman in this series, if not more. He is often seen straining his well oiled muscles, is rarely covered with a shirt and often wears only a loincloth and boots. He even gets a nude scene at one point in Barbarian, and at least a couple of close-up crotch shots during the fight with Man-Ape in Destroyer. Secondly, every action that degrades women is perpetrated by a villain. Virgin sacrifices are made to evil gods. Slave-owners force women to breed with Conan (something that violates both Conan and the women involved), then watch. In the one scene we see of this taking place, Conan covers the woman immediately, then gently leads her to a place where the lecherous slave owners can’t see what’s going on. Conan is a man who truly believes that women are equal to men and deserve respect. 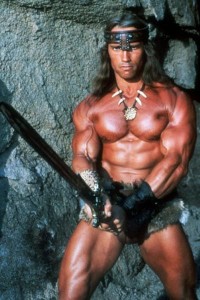 Racism
It cannot, however, be said that Robert E Howard’s original stories were devoid of racism. However, in the films, equality of the races was as little a question as equality of the sexes was.

Conan was trained in combat by Asians, and educated in the philosophy of various other cultures. He had friends of multiple ethnicities, including the thief and archer Subotai (an Asian man played by Hispanic Gerry Lopez), the wizard Akiro (played by Japanese-American actor Mako) and in the second film, the warriors Zula and Bambaata (Wilt Chamberlain). All the minority characters, including Thulsa Doom (played by James Earl Jones) are surprisingly stereotype free, aside from Akiro being a spiritual Asian mystic. (Some might call Zula a stereotype of the fierce African savage; I’d counter by saying in that environment, savagery is necessary for survival.) 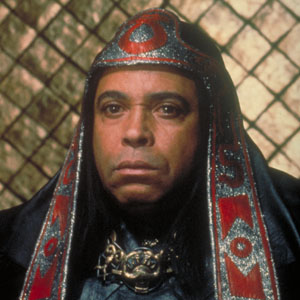 Thulsa Doom, the villain of the first movie, could be used as an example of a sort of racism in the first Conan film, as he’s the villain. But I think Doom is more appropriately seen as a counter-example to the “uneducated black guy” stereotype. Doom is a brilliant man who has risen to the top of the world with no noble blood. He is the one man in Barbarian who knows the answer to the Riddle of Steel, that steel is nothing compared to the hand that wields it and that true power comes from human strength, both physically and otherwise. John Milius apparently wanted the first film to be an examination of Nietzschean philosophy, with Conan being the triumphant example of the ubermensch. If Conan was the triumphant example, Thulsa Doom was a close second, a mighty leader whose empire lasted several generations, a philosopher, and a sorcerer whose magic is unequaled by any living man. Given that almost every other Hollywood role for black men at that time (including Eddie Murphy’s star-making role in that year’s Beverley Hills Cop) was 1 dimensional and stereotypical, casting Jones in that role, even as a villain, is quite groundbreaking indeed.

Religion
Even more groundbreaking is Conan’s take on organized religion. Leftist politics have been associated with atheism since Jean Meslier, a French proto-communist, wished that the nobility would be strangled with the entrails of the priests (a quote which Diderot borrowed). Conan is as much of an atheist as one can be in a time when gods walk the earth, and the script goes out of its way to make theistic religion look foolish.

Consider this dialogue between Conan and Subotai:

Conan: What gods do you pray to?
Subotai: I pray to the four winds… and you?
Conan: To Crom… but I seldom pray to him, he doesn’t listen.
Subotai: What good is he then? Ah, it’s just as I’ve always said.
Conan: He is strong! If I die, I have to go before him, and he will ask me, “What is the riddle of steel?” If I don’t know it, he will cast me out of Valhalla and laugh at me. That’s Crom, strong on his mountain!
Subotai: Ah, my god is greater.
Conan: Crom laughs at your four winds. He laughs from his mountain.
Subotai: My god is stronger. He is the everlasting sky! Your god lives underneath him.

In this discussion, Conan makes a case for his definite theistic god (Crom, the mountain god) being great, while Subotai argues for his god, “The Four Winds”, i.e. the sky itself, not a god but a part of nature. Conan admits that Crom doesn’t listen, Subotai asks what good Crom is in that case. Conan has no answer, so he talks of how strong Crom is, to which Subotai says that the sky is above all. Conan looks up and gives a look of begrudging admission of defeat, and says no more.

The primary villain in both Conan movies is a religious cult: the cult of Set, led by Thulsa Doom in the first movie, and the cult of Dagoth in the second. While most movies where a deity is aiding the villains would have the hero win through divine intervention (see Sleeping Beauty, Constantine, Ghost Rider, Clash of the Titans and Hercules for examples) Conan battles both these evil gods without any assistance from Crom. In fact, Conan even tells Crom that if he doesn’t give lend assistance, he can go to hell. Conan doesn’t care about offending a god that has done nothing to help him in his life. Using nothing but his own strength, wits, and sheer willpower, he is able to defeat Thulsa Doom’s army, withstand his Set-given mind control powers, and destroy a powerful cult. In the second movie, he straight up kills a god!

The message is clear: people can destroy gods just as easily as they create them. In fact, while there are two religions willing to sacrifice virgins that are hell-bent on world domination in these movies, with Crom being wholly apathetic to human affairs, there’s no indication of any truly benevolent deities, meaning that perhaps we should kill our gods.

So what does this mean?

The best propaganda is always the least easily detected, as it won’t be caught and rejected as easily, and the only way to advance your cause is to convert those who don’t already agree with you. The Conan movies, with their high-testosterone levels and massive amounts of violence, are perfect examples of stereotypical movies for the type of men who would vote conservative. They clearly do appeal to that mindset, as evidenced by the sheer number of conservative forum users who make Conan their avatar, or who use Conan’s famous paraphrase of Ghengis Khan as a signature quote. In fact, no less of a conservative luminary than Newt Gingrich’s protégé Grover Norquist has been known to quote Conan.

While this hasn’t helped politics become nicer in the last 30 years, the goalposts on those issues brought up by the Conan movies have shifted, and conservatives now have come closer to an agreement with progressives on racism and feminism. One need only look at the popularity of Sarah Palin, Michelle Bachman, Clarence Thomas and Herman Cain in conservative circles to see this is true. And while conservatives haven’t budged much on atheism, the general public of the USA has gained enough acceptance of atheism for to allow for several best-selling books and a successful movie mocking religion.

Conclusion
While it would be nearly impossible to pin the vast amount of social progress that has been made in the last 3 decades on any one source, given its popularity and the fairly clear messages, it’s hard to imagine Conan had nothing to do with this shift on social issues. The new 2011 Conan movie has already shown some dedication to progressive politics by casting Jason Momoa, a native Hawaiian/white mixed actor, but only time will tell if this movie will live up to its predecessors’ progressive legacy.

Ben Dobson is a socialist, atheist nerd blogging from Canada. 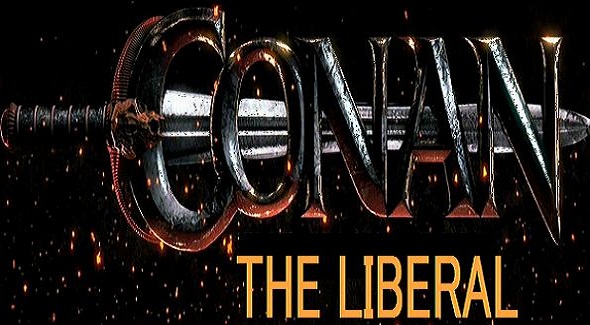 [Do you think Conan fans have bought into the barbarian’s liberalism? Or are Conan’s progressive attitudes a sop to the effete Aquilonian bourgeoisie? Sound off in the comments! – Ed.]

12 Comments on “Conan the Liberal”