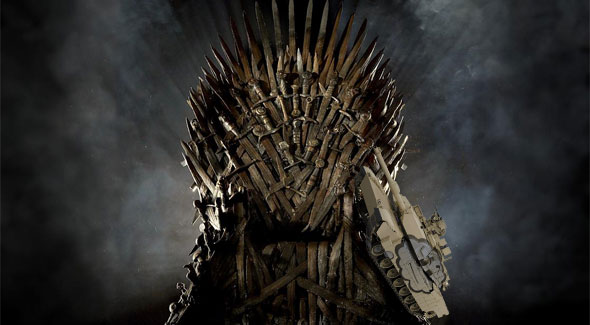 [Last week, with all the Game of Thrones posts on Overthinking It, I asked our internal email list whether I should declare “GoT Week.” This is part of the email thread that ensued. (Spoiler alert for the first novel and the first season of the HBO series.) —MW]

Belinkie
Sounds great! But for the posts specifically about the TV show, we should ask commenters not to bring in spoilers from the books fair warning. I’m trying to avoid spoilers myself, which is stressful. (The Onion TV Club has an elegant solution of printing two reviews each week, one for “newbies” and one for fans of the book, where they can discuss what they know about the big picture. Interesting situation.)

Wrather
Are you not going to read the books?

Belinkie
I’m enjoying the show too much to read the books! I’ll read them in eight years, when the show is done.

Wrather
The books are better. Richer, more complicated, more fully developed. Less satisfying in terms of T&A — breasts are kind of a let-down when described, as opposed to viewed, and HBO has made them the unique value proposition of its whole network — but more satisfying in nearly every other respect.

Belinkie
But I feel like I wouldn’t have loved the series as much if I had read the books first. I totally didn’t expect Sean Bean to die! Seems a shame to know what’s coming in Season 2.

Wrather
First of all, congratulations on not knowing that they kill Ned. I agree, that was shocking when I read it (back in 1996)—actually literally: my heart started racing and my jaw dropped—and seemed to signal that this series would be a game-changer for epic fantasy. Still, it does seem like the stock example of a GoT plot twist—like the time in book 4 where Tyrion invents a time machine—so I’m surprised that it wasn’t quoted to you out of context.

Kidding, by the way. Tyrion doesn’t invent a time machine.

But let’s think through the implications. I propose that your argument boils down to this: “I take pleasure in the series, part of which is not knowing what happens. If I read the books, knowing the story would ruin the pleasure I take in the TV show. Enjoyment: Net loss.”

(The relationship of “spoilers” and surprise to narrative pleasure is a subject for another OTI article or ten, but let’s just assume that spoilers would ruin your enjoyment.)

What I’m saying is that you’d gain more than you’d lose. There are a (very) few things that the series does better than the books, but many, many more things the books do better than the series—just because there’s more time, and because you have access to unmediated information from a character’s own thoughts. Peter Dinklage does a great job (bad English dialect aside) on the show, but Tyrion is a lot more interesting in the books where you can actually follow his reasoning and understand his complicated relationships to his family.

This is not to deny the series its due. I hate to be all, “A picture is worth a thousand words” (especially since before I was all, “Don’t Believe Your Eyes“), but the hilarious, pitiful, oh-so-human sight of old Grand Maester Pycelle doing deep knee bends after the prostitute leaves him in s1e10 is definitely worth a couple pages of novel.

Also, at the end of the first season, the sight of the cute little dragon head poking up over Dany’s shoulder is pretty awesome, and managed to surprise and delight even me who have read the books a couple times. Martin himself has said on his livejournal (!) that he enjoyed being able to do things on TV that his narrative technique doesn’t allow him in prose, like the private confrontations between Varys and Littlefinger, which can’t be in the book because there’s no POV character to witness them.

I also think you’re kind of participating in puritanical self-denial. We all agree that one of the things about GRRM is that he’s a good storyteller. (Not necessarily a great prose stylist… if I read about one more ruby “glistening redly”, I think I’m going to throw my valuable first edition hardcover across the room. And it’s kind of interesting that one skill — telling compelling stories — doesn’t necessarily map onto the other skill — writing prose of literary interest.) The story grabs hold and doesn’t let go. (OK, it wanders a little bit in the first half of book 4.) I’ll grant you that finding out what happens is one of the great pleasures of GoT.

Here’s what I’m saying: You can find out NOW! Today! One click on the Kindle, and you can learn the fate of The King In the North, what happens to Dany and the dragons, how things fare for Sansa and Joffrey, and Tyrion’s adventures in space. (Kidding about that last one.) If you enjoy the thing as much as you claim to, why wait?

37 Comments on “Game of Thrones: To Read or Not to Read? [Think Tank]”