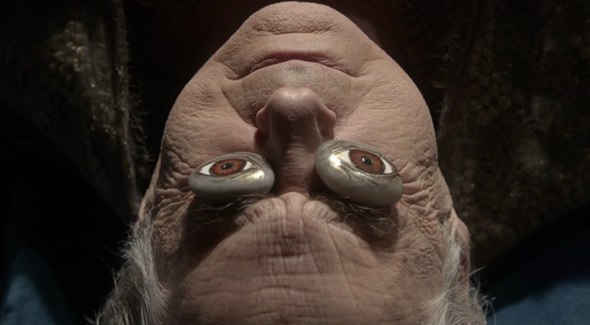 Beyond the rare opportunity to see Sean Bean play a man of honor and impeccable integrity (I always thought there was something shifty about him), HBO’s Game of Thrones, the adaption of George R. R. Martin’s Song of Ice and Fire novels, offers a number of other pleasures as well. The settings are lush, the photography high-quality, the imagined landscapes beautifully rendered, the bodices ripped, the bosoms heaving, the intrigue intriguing, the magic more or less nonexistent (for a Fantasy story).

Doubtless some among the books’ millions of devoted fans may find fault with the adaptation. It’s almost never a waste of time to ask whether a film or TV show does justice to a book, because it forces you to articulate what was worthwhile about the book in the first place. But I think that beyond questions of taste, emphasis, and abridgement, there is a very tough problem for any adaptation: the books’ distinctive style of narration.

For books, especially beloved books, there is a litany of standard complaints about adaptations for the screen. A novelist’s ability to pause the forward movement of the plot  and fill in background and details in the narration is not shared by a filmmaker. Sure, in the last couple decades film narrative has become more fractured and experimental. The canonical example is probably Pulp Fiction, which unfolds in non-linear fashion, or The Social Network, which is a similar kind of thing but less showy about it; but don’t forget the brilliant, underrated Crank 2: High Voltage or Scott Pilgrim vs. The World (notably an adaptation, where the film was struggling to cope with the representational innovations of the book). Still, while these examples are mainstream, they are notable primarily because they’re exceptions. By and large, screen narrative is stuck where the theater and the novel were a century and a half ago. Even when films are fantastical, the fantasy is presented, as it were, naturalistically—which is to say, in denial of its own artifice.

Though a lot of intrusion by a novel’s narrator threatens to interrupt the flow of the story and make the plot stutter, skillfully deployed, it provides a sense of texture, history, and scope which is important to epic fantasy like Game of Thrones. Throughout the series narrator is always giving you the (fictional) historical background of the Seven Kingdoms, providing background for characters’ assumptions and prejudices, and situation their actions within a cultural context. At its best, the series pulls it off brilliantly, which is why so many people got hooked on the first couple books: The world seems vast and fully-rendered.

By contrast, filmed narrative (that is, if you don’t want a voiceover as long as the 34-hour GoT audiobook), requires you to shift exposition to the dialogue, which means characters go around reminding one another of things well known to all of them. This can sound stilted, and disrupts the “realistic” interactions which were the heart of GoT’s appeal in the first place. What’s more, without the narration, the stately pace of the novel is transformed into a jolting and disorienting series of scene shifts, and all this cutting back and forth around the kingdom for short bursts of story, at its worst, gives gives the series the feel of a soap opera. A 1- or 2-second establishing shot can’t fill in for in for half a dozen establishing paragraphs which not only set the scene but ease you out of one frame of mind and into another. (Disclamer for the haters: They’ve only aired two episodes, this is a minor quibble, and it’s likely to get better. It’s also not even what this article is really about.)

As I say, these are standard gripes for a screen adaptation. The good ones find a way to mine the novel for its essence and distill it to its highest poetency, giving it economical and powerful visual expression. (This still takes time, something I’m afraid we don’t have in contemporary American movies and TV, which move at a dead sprint.) The bad ones are a forced march through the incidents of the plot, without any thought given to the different natures storytelling has in disparate media (see: all the Harry Potter movies except #3).

But GoT poses a special challenge for adaptation, because of the specific type of narration: third person, limited, jumping from character to character.

If all the characters are referred to as “him” or “her” and their is no “I”, just a narrative voice unfolding events, we call that “third person” and classify it as either “omniscient” or “limited” depending on how much information the narrator reveals to us. If the narrator reveals facts the characters don’t know, that’s “omniscient,”  and if we only discover things that the character discovers, that’s “limited.” (“Second person narration” is a controversial topic, and too distracting a rathole to address here. Suffice it to say, like many things, everyone tried it once in college and most decided it wasn’t for them.)

So the Ice and Fire books are told in the third person limited—characters are “him” and “her”, and at any given moment we only know what they know. Some of this knowledge is relevant to the plot, some of it—like the narrator’s historical interjections—serves to illumination fictional context and culture. But there’s one twist: Each chapter follows and is limited to, and by, a different character. This is admittedly less limited than a novel with narration limited to one character throughout, since different characters know different things at different times and we discover when they do—a tricky balancing act for a writer.

This narrative technique is related to the artistic project of the Ice and Fire books, which is, broadly, to rescue the epic fantasy genre from overly schematic, morally simplistic, good-vs.-bad hack and slash. As has been repeated to the point of numbness in the blitz of press-coverage attending the HBO series’s premiere, in GoT, nobody is all good or all bad; the characters have complex psychologies and find themselves on different sides of conflicts than you might expect based on shifting circumstances and the dictates of self-interest.

Jumping among characters, the third person limited narrative manages to tell a story that spans a great deal of space and time without privileging any one point of view. There is no canonical version of events, and no omniscient narrator to inform us who is right in the end. Art is not a geometric proof, moving inexorably to establish the truth of a single proposition, and the novels emphasize a multiplicity of view points, none with obvious moral superiority. In other words, one way to break down the good-vs.-bad dynamic is to make sure there are no good guys and bad guys, and in a novel concerned with political and military struggles for power, having no good guys means that victory is determined through maneuvering, intrigue, violence, and chance.

What’s more, we can throw the post-structuralists a bone here, because the destabilization of narrative authority extends beyond people’s motives and opinions to history itself. There isn’t a single, canonical version of events, either of the plot or of the series’s massive backstory. Historical authority is revealed as a discourse—created and manipulated to serve powerful interests or else merely subject to the vicissitudes of experience and interpretation.

Finally, the limited perspective of the narrator creates suspense. Either we discover information as characters discover it, or else we witness the dramatic irony of characters acting without knowledge we’ve gained from another character in an earlier chapter. In this way keeping the narration close to a character is akin to keeping the camera close to a character in a horror movie—by pulling the frame tight around one consciousness, you create the possibility for surprises to come from outside it.

I mention the camera because it’s really the camera that creates difficulties in the adaptation. In film, the camera can come to feel like it has its own agency. Nobody ever says what “Rosebud” is in Citizen Kane, it’s the camera which reveals the secret in the final shot. The camera cuts, moves, and focuses independent of any character’s consciousness or knowledge. There is a long rack focus in GoT Episode 2 from one character to another which emphasizes the point—the camera is still highlighting multiple points of view, but it is doing so simultaneously, without limiting itself to one or the other.

This gives us the sense that there is privileged knowledge, that the camera has it, and that it is transmitted to us by seeing. The camera has its own point of view, and it mediates and dominates the characters’ points of view. Without the limited narrative interjecting and jumping among characters to ironize what we see, we are prone to believe our eyes and take what we see at face value.

This is not helped by a few simplifications or shifts of emphasis in the plot, which make the whole enterprise seem less morally gray—case in point: Danerys & Drogo’s wedding night. But the most blatant example, and the one I want to highlight, is the way the series renders the discovery Bran makes while he’s climbing the walls at Winterfell. (Sorry to be enigmatic; I’m trying not to spoil the revelation, especially for new readers of the novels.)

Appropriately enough, since I’m making a point about the effects of the camera, it’s something he sees—or rather, something he shouldn’t see but does anyway. Bran catches sight of something as he’s climbing Winterfell’s Broken Tower early in the first novel and late in the TV show’s first episode. In the novel, what (whom) he sees is filtered through his own consciousness—his child’s understanding and his limited acquaintance with the other characters—and rendered for us in enigmatic form. It is actually possible for the reader not to cotton on, and for Eddard Stark’s discovery about two thirds of the way into GoT to come as a surprise.

In the series, by contrast, we see exactly what he sees—we know who the people are and what’s going on. The privileged knowledge of the camera has superseded Bran’s limited knowledge, and a lot of suspense deflates from the first novel’s central mystery.

In other words, we believe our eyes. And we are the worse for it.

[How do you like the adaptation of GoT so far? Sound off in the comments. I’d also like to take up a practical question: How might the series have adapted the novels’ third person limited narration in a way that would have preserved some of its benefits without making each episode a 60 minute long POV shot or going what Stokes, in an email, called “The Full Roshomon”?]

18 Comments on “Don’t Believe Your Eyes: Game of Thrones, Narration, and Adaptation”