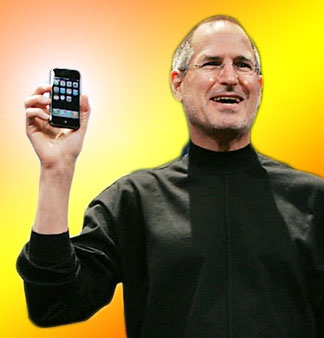 I am a medium-rabid Apple fanboy, having started out on the Apple IIc (excuse me, //c) when I was a sperm. And, yes, I spent this morning reloading several liveblogs of Steve Jobs’s WWDC Keynote Address like a rat hitting the lever marked cocaine.

For those of you with, you know, lives, today saw the anouncement of the iPhone 3g as well as the very cool looking (though awfully named) Mobile Me sync and cloud-computing service. If you’re talking about the “Making Tech Things That Are Cooler Than Anyone Else’s Tech Things”, then Apple is winning.

(Much of the speculation happened to be inspired. My favorite was the so-called iTablet, a handheld computer about four times as big as the iPhone, with about the same feature set. I still think they should do that.)

And it further strikes me, since this is a pop culture blog, that this is the same problem that some summer movie blockbusters have been facing. The plots, the running times, the box office performance, the star salaries, the concession prices having to do with summer action tentpoles have become so bloated, that the actual content of the experience of going to the movies can’t compete with the hype.

12 Comments on “The God Paradox, or: Could Steve Jobs Make An iPhone So Awesome, He Himself Couldn’t Launch It?”