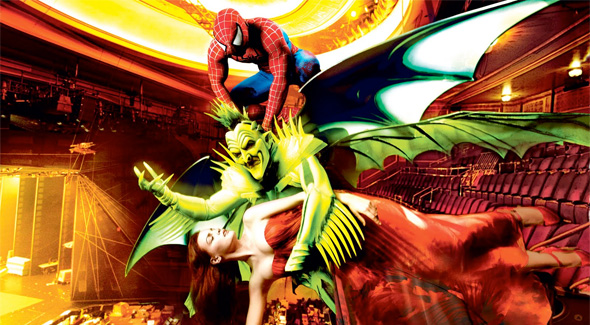 If it looks corny, it's because it actually is corny.

In early March 2011, I saw the infamous Broadway musical, Spider-Man: Turn Off The Dark while it was still in previews and immediately before director/writer/auteur Julie Taymor was fired from the production (due to her unwillingness to accept major revisions to the script and music). I won’t do a review of the show; I already did that to some extent on the podcast, and the show has already been skewered by more than enough reviewers to obviate the need for an additional screed on the topic.

Instead, what I’d like to do in this space is explore some of the larger issues at stake with this troubled musical. It gets incessant coverage in the entertainment media, yet few are pausing to ask, “why all the fuss over this musical?” Granted, there’s the lurid appeal of injuries and the flashy A-list names (Bono, , The Edge), but we wouldn’t be Overthinking It if we just stopped there.

Hint: it’s not Spider-Man: Turn Off The Dark.

Julie Taymor: One of the Boys?

Look upon my works, ye mighty, and despair.

I was ready to dismiss gender politics as a significant factor in the furor over this musical. If people are rooting against Julie Taymor, it’s not because she’s a woman; instead, it’s because people like to root against anyone who embarks on hugely expensive creative projects and promise a work of staggering genius. Remember how everyone seemed to want James Cameron to eat crow leading up to the releases of both Titanic and Avatar? Remember the collective meh and Axl-bashing that accompanied the long-delayed release of Chinese Democracy? It’s not about gender, I thought.

But then I realized that Julie Taymor explicitly says that it is about gender by the way she wrote the show. Allow me to explain: the first people we see on stage aren’t characters in the Spider-Man story; they’re a “geek chorus” that are discussing their ideal, canonical Spider-Man story. At first, three teenage boys quickly rehash the outline of the story that we’re all familiar with, but then a girl interrupts their fun, ridicules them for their juvenile attitudes towards gender, sexuality, and Spider-Man, and insists upon adding her own flair to the story.

That flair? The much-maligned Arachne character and plotline, in which the spider-woman from Greek mythology enters Peter Parker’s dreams and…oh I’m not even going to try to explain. It’s a hot mess, but more importantly, it’s a decidedly gendered hot mess. I think it’s pretty clear that Taymor’s additions of the sassy female member of the Geek Chorus and Arachne are her way of asserting herself in the male-dominated comic book/superhero world. A story once told and dominated by men is now in the hands of a powerful woman.

There are a lot of unflattering pictures of Clinton on Google image search. Go ahead, try it and see for your self.

Any of this sound familiar? Remember what happened when Hillary Clinton ran for president? Many saw her as a woman trying to get a man’s job and questioned her qualifications due to her gender, both implicitly and explicitly. Granted, we don’t see the same degree of overt, gendered criticism for Taymor, and I think that has a lot to do with the fact that the world of musical theater isn’t male dominated in the same way that politics and comic books are. But Taymor was either anticipating a gender-based backlash, or was already receiving such backlash when she wrote this show, and her reaction is undeniably forceful and direct.

So are criticisms of this musical and Julie Taymor indicative of latent sexism in society? That’s debatable and would require a fairly exhaustive scouring of media reactions and the language they use to suss out, but what’s not debatable is that Julie Taymor saw gender as enough of an issue to make it such an important part of the show.

If you’ve been following this story, you’ve probably noticed that the show’s $65 million (and growing) price tag is mentioned in nearly every news article on the topic. It’s the most expensive musical in Broadway history (besting the previous record holder, Shrek: The Musical, by at least $40 million), and that fact is part of what keeps the show in the news. Now, details about the excesses and extravagance associated with that budget are starting to emerge:

Left largely to her own devices Ms. Taymor hired top-dollar stars to design the sets and costumes and to choreograph the show. The costume team alone had 23 people — 4 designers, 4 shoppers and 15 dressers. At one rehearsal in November at least a dozen designers and crew members struggled to fasten a spider costume onto the actress Natalie Mendoza. Not enough, it seemed.

“Can we get the puppet department up there?” Ms. Taymor said into a microphone. With that, 20 more people took the stage to help Ms. Mendoza. A video crew documented the creative energy.

Even without knowing the details of the swarm of extraneous costume designers and videographers, one cannot help but be repulsed by the show’s gargantuan costs, particularly while the economy continues to flounder, houses continue to go into foreclosure at alarming rates, and governments with massive fiscal crises are laying off cops and firefighters by the droves. On one hand, we’re told to do more with less and to embrace a new sense of financial austerity. On the other hand, a trainwreck of a Broadway show taps a seemingly never-ending stream of cash and has…a laughably campy air to show for it: 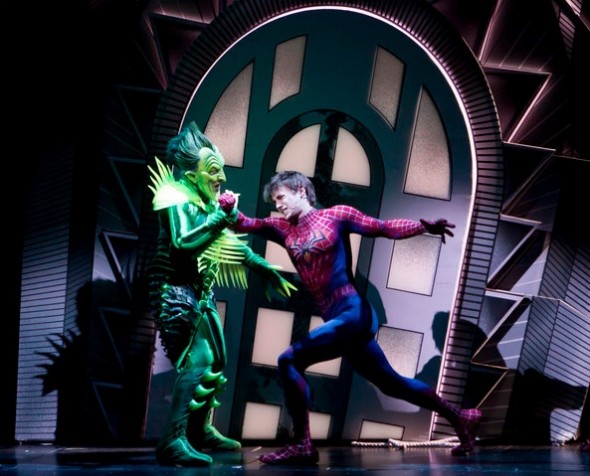 Now, to be fair, it’s not like some insanely rich, evil hedge fun tycoon has been solely and indiscriminately financing this show for the past decade. In fact, the production came close to bankruptcy a few years ago and will do a lot of damage to the show’s investors if it flops. But details like that get lost when people casually scan the news and hear about this Spider-Man musical that’s THE MOAST EXPENSIVE EVAR and is also TEH SUX while they stare at their dwindling bank accounts, wonder how they’ll make the mortgage this month, and then read about increased taxes and reduced police protection in their community. Couldn’t they have found something better to do with those $65 million, besides put the Green Goblin in a silly rubber suit and injure a lot of stuntmen?

Like, for example, hire someone to come up with a better title? 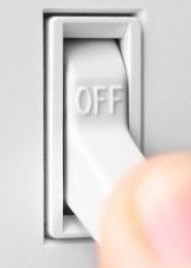 Turn Off The Dark

I’m surprised I haven’t heard more people talk about this: I firmly believe that one of the reasons why this musical gets so much attention and is ridiculed so much in the press is that its title is bad. Really bad. I mean, unfathomably bad. It’s so bad and so obviously open to parody (read the comments on “Overthinking It Podcast Episode 140, ‘Hulk: Turn Off The Smash'” for proof) that I think people haven’t stopped to appreciate the magnitude of this particular showing of incompetence.

Let’s talk about titles for a moment. A good title primes the audience to expect a certain tone (Terminator: sounds menacing), and it communicates an idea that ideally is reflected in the work of art itself (Terminator: it’s about terminating). Consider other titles (besides my favorite, Terminator) that work well in this regard:

Bat Out Of Hell

We take awesome titles like these for granted because they are associated with awesome things. Now, consider a less awesome title:

To my knowledge, there were no flying wire stunts or bullshit Greek choruses in this TV show.

What’s that? Never heard of it? Have no idea what it’s referring to? I don’t blame you. Terriers was by all accounts a fantastic television show, but it had an awful title that probably did significant damage to the show’s chances at survival.

Here’s the show’s premise from the Wikipedia page:

Ex-cop and recovering alcoholic Hank Dolworth (Logue) partners with his best friend, former criminal Britt Pollack (Raymond-James) in an unlicensed private investigation business. The series is set in Ocean Beach, San Diego, California, although it is portrayed as a distinct town, Dolworth having been a member of the fictional “Ocean Beach Police Department”

Sounds cool, right? Unfortunately, none of this is reflected in the title. At all. So when you’re flipping through your cable channel guide or scanning through a TV blog and thinking about what you’re going to watch tonight, coming across the word Terriers brings to mind…dogs…not a grizzled private detective and his misadventures. Skip. Show canceled. Not helped by a bad title.

Now, back to Spider-Man: Turn Off The Dark. It’s a nonsense phrase and therefore incapable of communicating anything substantive about the show. And before you ask, no, there’s no discernible theme of lightness vs darkness in the show’s plot. It’s offensive to the rules that our brains subconsciously follow when parsing titles.

More specifically, the phrase Turn Off is just that–a literal “turn off.” I put the picture of the light switch in this article mostly as a cheap joke, but it actually illustrates my point. In English, the phrase “turn off” almost always carries a negative meaning. People talk about their “turn-offs” on online dating profiles, and they are not things you want associated with a musical. “Turn off the lights,” beyond the literal meaning of deactivating electrical illumination, implies shutting down or closing operations, sometimes for good. This, too, is not an idea you want associated with a musical or, for that matter, anything that’s supposed to be rousing and exciting.

And the final insult to injury? The fact that this nonsense, depressing phrase, “Turn Off The Dark,” is paired with one of the most iconic, effective, and evocative titles ever conceived:

Okay, fine, we’re also talking about the injuries and the fact that Bono and The Edge wrote some crappy music for this show. In addition to gender politics, the economy, and the WORST TITLE FOR ANYTHING EVER.

Readers: what do you think? Is Julie Taymor getting a hard time because she’s a woman? Should that $65 million been spent on cops and teachers? Can you think of a worse title than Spider-Man: Turn Off The Dark? Sound off in the comments.