Warning: There will be spoilers. And zombies. But mostly spoilers.

The marketing material for The Walking Dead looks like this: 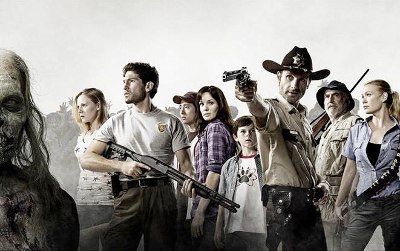 And the early Walking Dead comic book looks like this (although the artist is replaced shortly after the part of the story portrayed so far in the TV show, which is just a few issues): 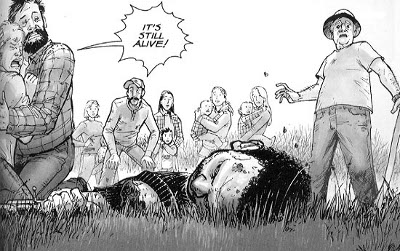 While The Walking Dead the TV show looks more like this: 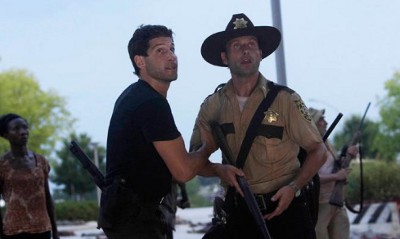 Plucky adventurers in a bright place with lots of color. 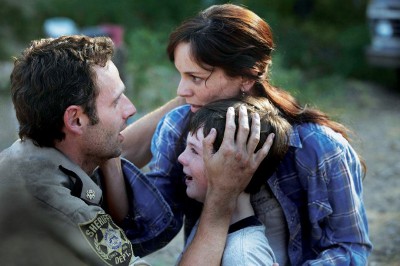 Plucky family fighting to survive and stay together.

After I while, I got to thinking that the show is really a lot less like this: 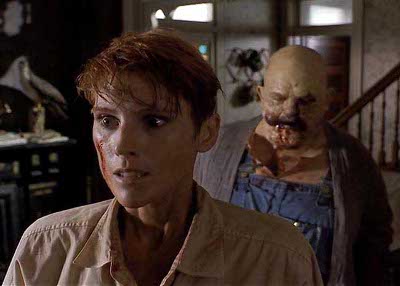 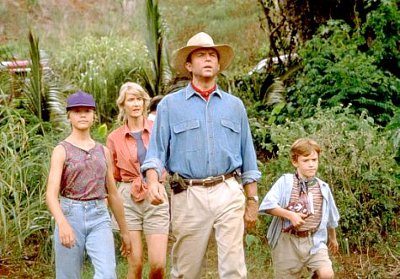 Plucky family of adventurers fighting to survive and stay together in a bright place with lots of color.

The pants are no longer pleated and the monsters look less like lizards, but The Walking Dead the TV show seemed to be modeled much less on zombie/survival culture and much more on adventure/monster/survival culture – specifically safari-ish stories like Jurassic Park.

This is a weightier, more complex issue than just the art direction, costumes, photography and set design (which are of course not clearly defined or conclusive across genres) — it speaks to the heart of what zombie stories are about and why they captivate the way they do. More on this, and on why shambling corpses and carnivorous lizards aren’t always that different, after the jump —

Tell it to the Giant Snakes

Okay, so, thought experiment time. Let’s say we wanted to put the following scene  in The Walking Dead. What parts of it would we have to change?

As you can probably tell because you are a connoisseur of fine film, this scene is from Anaconda 3: The Offspring, a made-for-TV monster movie starring David Hasselhoff (subtitled in German, ‘natch, because Germans love David Hasselhoff). And the answer to the question is – everything except the shots of the giant snake would fit right in an episode of The Walking Dead. This is unfortunate, because the cast of Anaconda 3 looks ridiculous: 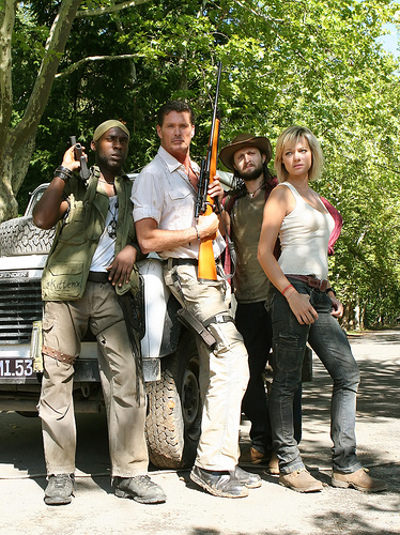 Good thing there’s nobody on The Walking Dead who looks as silly and patently cliche as David Hasselhoff. 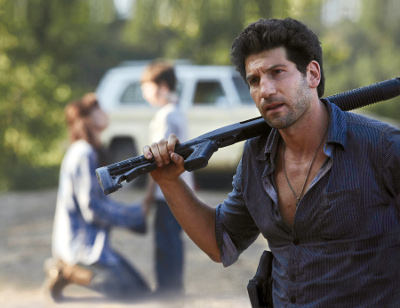 Actually, no, it turns out that there is a guy on The Walking Dead who looks and acts quite a bit like David Hasselhoff (though the ‘Hoff has gone back and forth on chest shaving).

The pictures illustrates the underlying point: this is a generic scene about surviving in a place where you think you ought to be safe, but you aren’t, because you are relatively isolated and there is a monster. There is nothing in the scene that specifically dictates the monster has to be a snake. You could take the monster out and replace it with any number of other monsters, and the story would function the same way.

Think of the times the people in The Walking Dead come upon or fight zombies. Usually it’s a supply raid, a rescue party, or a defense of the home base. 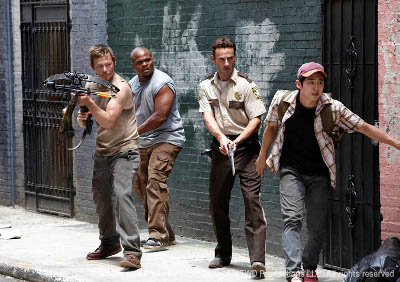 For people whose world has fallen apart and are supposed to be "mismatched," they are awfully great at keeping a level head while running complex urban tactical combat operations.

The relationship between the camp and the city of Atlanta are even similar to the situation in Jurassic Park – you have a place that’s perceived to be safe, but is only sort of safe, and people have to go to some sort-of-faraway place that would normally be easy to get to, but is dangerous because there are monsters. The challenge is to get there, do what you need to do, and get back whilst not being taken down, and before the monsters overwhelm home base.

This isn’t the apocalypse, it’s capture the flag.

21 Comments on “The Walking Extinct”