Certain kinds of monsters tend to be interchangeable. Wild animals, fantasy monsters, various beasts, creeps, robots — there are a lot of monsters that don’t impose a specific form on the stories in which they appear. Godzilla can fight a giant version of pretty much anything (and pretty much did). Ninjas can fight pirates and it doesn’t matter. You can collect more than 151 Pokemon and use any of them you want in most fights, whether they are ducks or dragons or boxing things or whatever.

But zombies generally don’t work this way. Zombies come with specific sorts of stories, because they relay a form that tends to influence the way stories function. The Walking Dead chooses to ignore this and frame a zombie fight as a monster fight, missing out on the chance to get more closely involved with the broader artistic project and tropes of zombie stories.

Take this scene from Episode 3 (by the way, it’s worth noting that, in rewatching episode 3 looking for examples, there are many surprisingly long stretches of The Walking Dead that are totally devoid of any relation to the zombie apocalypse, either directly or thematically. “Thank you for washing my clothes” was a big one.).

RICK: “I’ve been thinking about the man we left behind.”

SHANE: “Water’s here, y’all. Just a reminder to boil before use.”

LORI: “Are you asking me or telling me?”

(Various yelling as people run into the woods.)

LORI: “Noting bit you? Nothing scratched you?”

(Gang of men with guns and cudgels come upon a zombie eating a deer. The zombie is slow and methodical, savoring the deer flesh. When it feels threatened, it gets up, yells at everybody, and rushes at Rick. Rick hits it in the face with a stick. The men beat the crap out of it until Dale chops its head off.)

DALE: “This is the first one we’ve had up here. They never come this far up the mountain.”

JIM: “Well, they’re running out of food in the city, that’s what.”

(Everybody hears noises. SHANE gets tense, raises his gun, looks out into the woods. DARYL appears.)

DARYL: “Son of a bitch! That’s my deer! Look at it, all gnawed on by this filthy, disease-bearing, motherless, toxic bastard!”

There is then more talk of deer tracking, trying to save the deer and eat venison, and a reference to On Golden Pond. The decapitated zombie head lurches, and DARYL shoots it in the eye with an arrow.

The zombies act, and are treated, like animals. They have basic intelligence and awareness and clearly want things (mostly to eat). They are dangerous, but people can generally best them if they get the upper hand and have the right weapons. The really dangerous circumstance is to meet them alone. But the people have a settlement that is more or less free of them, except for occasional attacks, and in that space, as long as they take care of their basic needs, they’re pretty much okay.

It’s worth noting for the sake of fandom that this isn’t how the subject is treated in the comic books. The full events of the show go by in just a few issues of the comic books. People die a lot more frequently. The despair of it all is a lot more crushing. People’s arrogance against the persistence of the zombies is a lot more apparent and fragile. All the characters much more quickly become unhinged by the insanity of their situation. The zombies have an effect on people characteristic of zombies – the world has fallen apart, and the mockery the zombies make of humanity calls into question the humanity of the characters themselves.

Because zombies have the bodies of humans, in most zombie stories, they draw a comparison between themselves and the survivors. In every zombie story that embraces this tradition, from Dawn of the Dead with its shopping mall and anticonsumerist message to Shaun of the Dead and its thirtysomething electronics store clerk who shuffles every day through his commute dead to the world, such that he doesn’t recognize when the zombie apocalypse has happened, the surviving characters are compared to zombies, and the zombies are compared to human beings in some way. 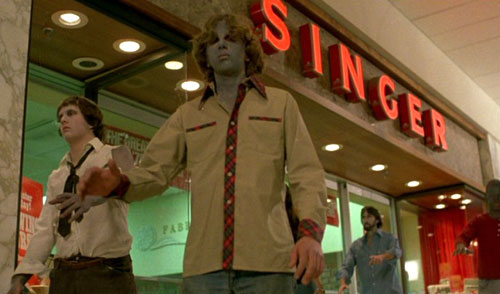 In Dawn of the Dead, the zombies keep going to the mall as they did as people. Are we that different? Has our taste in shirts improved that much since 1978?

In most zombie movies, the “walking dead” are, in some way, us. The people of the earth, especially of its cities and privileged developed areas are the zombies – we are the mindless hordes who destroy the earth and feed on each other. We are the ones who shamble about blindly following our appetites, without the vibrancy and immediacy of meaningful life. We are the doomed ones. The zombie apocalypse has already happened.

This is what zombie stories are about and how zombies function uniquely as monsters.

Now of course, this isn’t exhaustive. We can get into an endless debate of semantics and exceptions. But the general form of it comes through. And there are certainly scenes in The Walking Dead that are zombie-specific (like the man holed up in the house who can’t shoot his zombie wife). But they are pretty few and far between, compared to the scenes about surviving without the comforts of modern civilization or fighting generic monsters.

Another One for the Fire

Now, take this scene, from the 1990 remake of Night of the Living Dead (special bonus for Babylon 5 fans!). How much of this scene would work if you replaced the zombies with giant snakes?

The answer? Pretty much none of it. The human form of the zombies is essential for the comparisons here, which say a lot about savage human nature, about race and racial violence in America, and about the primitive roots of contemporary execution of physical violence. This is classic Romero style – these kinds of comparisons are not the only way to make a zombie movie, but they’re one of the best and most influential.

How about this scene, from 2007’s 28 Weeks Later (I’m picking somewhat lesser-known properties because the clips are slower to get taken down from YouTube, even though we are using them for educational purposes, after a fashion). What parts of this scene work if the monsters are bears, or giant snakes, or mutant bats?

None of them. This scene is about family and trust. The girl sees the boyfriend as part of the family, but her family sees him as an outsider. The boyfriend’s leaving constitutes an act of betrayal they won’t forgive. You get the sense that, even if he weren’t a zombie, he’d be treated much the same by all parties.

Then, the young boy comes in as a counterpoint. His family is trying to kill him. He’s searching for outsiders to help him. But the family’s fear of trusting outsiders turns out to be justified when the kid brings zombies in tow toward the house.

None of this works if the monsters are bears, because it’s not about the survivors living through the movie. It’s about their relationships to each other and the world they live in.

That’s another unique point about zombie stories – more than any other kind of monster story except for very similar alien body snatcher stories, zombie stories are totally fine ending with a TPK – a Total Party Kill, or Wipe, where the good guys lose and everybody dies.

This is not the case with, say, movies about genetically engineered dinosaurs. In those movies, we usually need to see somebody survive and the dinosaurs, because the point is the threat to our own lives. In zombie movies, survival isn’t the goal. The goal is remaining an individual, finding oneself or preserving the relationships that matter in an alienating world, and the fact that this is hard and sometimes doesn’t work is part of the point.

That’s a big part of what makes zombie stories so scary. Zombie stories are heavy with futility. As one of my dearest friends always says, “Think about it. You can’t kill them; they’re already dead.” The individual zombies usually aren’t hard to kill, but in a large group, they are unstoppable. You think there is going to be help, and there probably isn’t. You think the government can do something, but it probably can’t. You think your own group of survivors will hold together, but it probably won’t. The worst acts in zombie stories are usually committed by surviving human beings against each other.

That’s why The Walking Dead the comic book is so bleak. It follows these characters over the long haul, keeping up a tone of futility for much of the journey. And it’s why the marketing material for the show is so bleak – because this is the gray, dusty world, fallen and given over to the zombies.

But the show isn’t like this at all. Even with the various attempted rapes and acts of intrahuman violence, there is still plenty of hope for the protagonists to end up okay, and that idea is woven into the very fabric of the show, from its acting to production design to dialogue. And this is kind of disappointing, because it makes the show so much more common and less interesting than it could have been. But it leaves open the possibility that things may change quite a bit in the future… 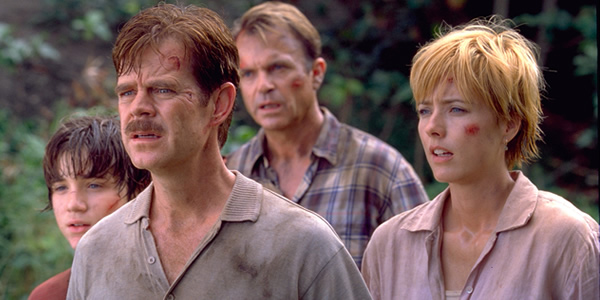 Or maybe, as William H. Macy and Tea Leone found out in Jurassic Park 3, they'll make more of the same, only worse.

21 Comments on “The Walking Extinct”