It is possible that Steven Moffat (Dr Who’s current show-runner) is so uniquely in touch with the concept of “eternal now” that the message of Jesus is evident in episode after episode. Time and again, we see the Doctor willing to sacrifice himself for others. As a poignant example: the 2007 episode “Human Nature” in which the Doctor has a chance to walk away from being a Time Lord, avoid death and live a normal life with a wife and children and be human. He chooses not to. This is certainly the last temptation of a Time Lord. 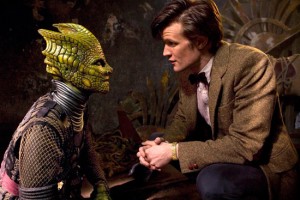 Whether fighting genocidal cybermen or simple human bigotry, the writers of “Dr Who” perpetuate the teachings of Jesus again and again. In 2005’s “Dalek,” the Doctor chooses to show mercy one of his greatest enemies. In 2010’s “Hungry Earth,” the Doctor looks into the face of an assassin and sees only the beauty within. Perhaps one of the most notable examples is from a 1975 episode “Genesis of the Daleks.” The Doctor (then played by Tom Baker) is given the chance to play God. With a simple decision, he can prevent an entire evil race from ever coming into being. The Daleks are responsible for the deaths of billions yet the Doctor knows that warring planets will one day join forces against the Dalek enemies. Once again, the Time Lord chooses mercy.

One of the most notable parables of Jesus is also one of the most misinterpreted. Other than “the good Samaritan,” no other parable has entered the English lexicon like “the prodigal son.” A man has two sons: one good, one not so good. The younger son asks his father for his share of the inheritance and promptly squanders it on booze, hookers, and cheap living. He crawls out of the gutter and makes his way home where his father promptly says “All is forgiven. Let’s have a party!” Many sermons gloss over the reaction of the eldest son, which would be, shall we say, justifiably pissed. The story ends with the father trying to coerce his obedient child into the party.

The Bible never tells us if this happens or what becomes of the relationship between the brothers. For centuries we have been taught in Sunday school to “be the good son” and not “the bad son.” However, there is a bigger lesson here that the writers of Doctor Who understand. What if we are intended to be BOTH sons in the story? What if we are equally the good and the bad son? What if we are both the light and the dark? The writers of Dr Who – both video and audio – understand that the Time Lord is made of both light and dark and that we must be both in order to be complete.

Emmanuel Kant said, “I’d rather be whole than good.” The Doctor understands this. So, obviously, did Jesus. This is the very basis of a new faith that will spring from this understanding of Jesus’ role in the web of time.

Once we accept Jesus not as messiah but as Time Lord (or perhaps Messiah because he is a Time Lord) then the TV shows and the Big Finish audio discs become the new parables. Beautifully told, sometimes confusing stories that take on new meanings depending on who is listening to them. Watch episodes of the program like “Dalek” or listen to audio adventures like “Embrace the Darkness” and ask yourself: who am I in this story? How is this story an allegory for my life? 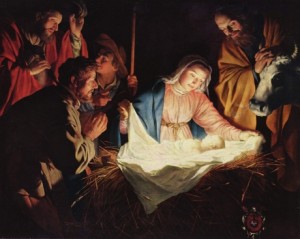 Acceptance of the Time Lord as part of the Bible will change much. Imagine the children’s Christmas pageants where the Wisemen arrive by TARDIS. Think of Sunday school coloring pages with a Time Lord appearing to a scared teenage girl in Nazareth and telling her “Fear not! For behold I bring you good news!” Imagine a flannel graph with a TARDIS secretly appearing and leaving behind Ten Commandments for a wandering leader seeking guidance from above. It could change religion as we know it. Churches around the world will be able to advertise “Come Worship with Us. It’s Bigger on the Inside.”

Accepting Christ as Time Lord will make writers like Steven Moffat, Robert Shearman, Nicholas Briggs, and Russell Davies into the new evangelists. Their words will become the Truth. With these new “Truths” people will be quoting Dr Who episodes like scripture.

I have seen the world inside your head and know that all things are possible. – “The Girl in the Fireplace.”

I came back to life before your eyes. I held back death. Look, I can’t make your dream come true forever, but I can make it come true today. – “Doctor Who: The Movie”

Logic merely enables one to be wrong with authority. – “The Wheel in Space”

Not all that far off from “Love thy neighbor as you love yourself.” Imagine if we all treated each other this way. If all we can do in this life is to add to someone else’s pile of good things, then that’s a good life indeed.

Dr. Who fans around the world will become the new prophets and preachers and then the geeks shall truly inherit the earth. 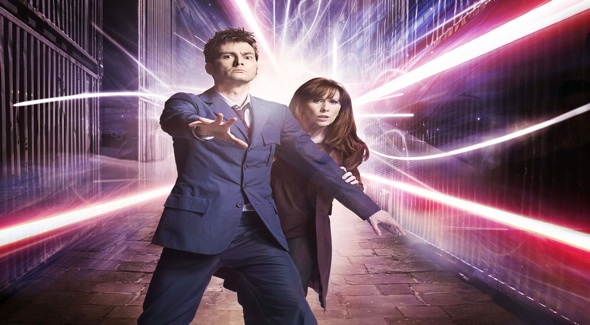 [Was Mary Magdalene the first Companion? Did The Master tempt Jesus on the roof of the Temple? Have a go at it in the comments! – Ed.]