I’ve been asked by a few people to write a follow-up to the Female Character Flowchart piece that went up a couple of weeks ago, so here it is.  First, I would like to thank those of you who added to the excellent discussion in the comments section with your wonderful over-thoughts.  A few questions kept popping up in the comments and in some e-mails, so let me do a quick FAQ:

YES! Visit the Overthinking It Store.

Probably!  Hey, I’m not a Lucy Liu-bot.  I make mistakes.

Hey! [Insert character here] is so a three-dimensional character!  I think she’s awesome!

Actually, I probably think she’s awesome, too.  In fact, I like most of the characters in the flowchart.  I repeat: Just because a character is two-dimensional or flat, it doesn’t mean she’s a bad character. This is especially true for many fictional romances (e.g., fantasy, sci-fi, or adventure stories) and comedies, where almost all of the characters are “types.”  As I said in my strong female character piece, I personally don’t like when I see trophy female characters who have no real flaws just so they can be attractive to adolescent male audiences.  And, as I said in the caveat section of the flowchart piece, I just have a problem when writers treat their dude characters like complex human beings but their lady characters as props or ideas.  And that, unfortunately, happens a lot.

Why did this chart focus on “strong” female characters?  Shouldn’t you use a different/more specific term, like “well-developed” or “dynamic”?

Probably!  I only used the term “strong” because the flowchart is meant to be a companion to this piece I wrote a while back.

Way to be a feminazi, feminazi!  This is just another example of the gynocentric gynocracy in action!  Men are victims, too, you know!  Women are such whiners, and they’re shrill, and they’re always bleeding everywhere…

Whoops, should have been clearer about that.  I have no problem with Yoko Ono.  Actually, I think she’s super-cool.  I was just using her name as a trope, just as I used the name “Michelle Rodriguez” as a trope.  Just as the “Michelle Rodriguez” trope doesn’t actually refer to the real Michelle Rodriguez, the “Yoko Ono” trope does not literally refer to the actual, living, breathing Yoko Ono.  It refers to the IDEA of Yoko Ono in pop culture and the characters associated with that idea.  For example, the girlfriend in “This is Spinal Tap” is a “Yoko Ono.”

Can you define “three-dimensional character” for me?

Nahhhhh rather not.  Just use your own definition, or read my “strong female characters” article, or read TVTropes’ thoughts on the subject, or Google “three-dimensional character” if you want.  You’ll get about 9.3 million takes on the subject.

Can’t a character be three-dimensional AND represent an idea?

Probably, but it’s a lot harder.  Symbols only really work when they’re obvious.  Three-dimensional characters tend to be self-contradictory at times, which usually makes them less-than-effective symbols.

Maybe I will, one day!  But for now, I’d like to present you with Mlawski’s “Should I Make a Flowchart Flowchart”: 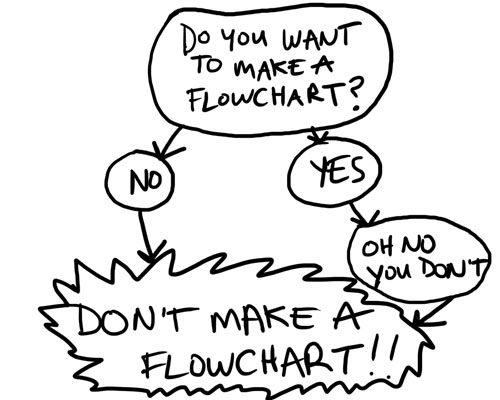 Apologies to Toothpaste For Dinner.