Believe it or not, I didn’t pick this topic just as an excuse to be a curmudgeon – though with me that’s always an added bonus. I picked it because overthinking it will be instructive.

IMDb may have been on the Web since 1992, but it dates back to the rec.arts.movies Usenet newsgroup in 1989. The “database,” in that time, was the output of a number of lists and Perl scripts designed by Col Needham, Chuck Musciano and recent podcast guest Randal L. Schwartz. Usenet posts weren’t good for a lot besides text. So it makes sense that the original categories of the database, such as Memorable Quotes, would be largely textual.

But IMDb has evolved to more than a repository of Usenet posts. It now has many forms of rich media. IMDb’s page for Crank 2: High Voltage features photos and video. You can scroll down hypertext links on the side, or pull them out of a drop-down. It’s a dense, interactive experience. It’s no longer just text.

Given that the Memorable Quotes aren’t “quotes” per se, we can sit on the sidelines and judge. Or we can ask: what is it that the authors of these “quotes” are trying to accomplish?

Consider the Memorable Quotes for Crank 2:

Long Beach Nose Punch Triad: [points a two tone Springfield XD pistol at Chev] Lost?
Chev Chelios: Nope.
[parries the gun out of the gunman’s hand and slams his forearm in his face knocking him out]

At the risk of repeating myself, that’s not actually a quote. Here’s the same exchange as a quote:

But that’s not memorable. There’d be no reason to preserve that text. What makes it memorable is Jason Statham’s delivery of the line and his execution of rapid violence immediately following it. The dialogue’s almost an afterthought. Imagine the exchange without dialogue; it’d still work. 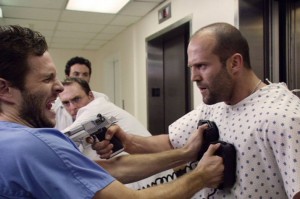 The words would just get in the way here.

IMDb thrives on a lot of user-generated content. When a user submits a “quote” that’s full of stage directions and opinionated riffs on the action surrounding it, what they’re trying to do is reconstruct a scene. “Remember that time? In The Dark Knight? When the Joker’s teasing Rachel Dawes and then Batman shows up and says, ‘Then you’re gonna love me’? Wasn’t that great?” It was great, anonymous Internet fan. But it was great because of Heath Ledger’s magnetic performance, the tension around whether or not he’d injure Maggie Gyllenhaal’s character, the music heightening the suspense and the cinematography keeping Christian Bale out of the frame until he delivered that line. The dialogue itself, while cool, wasn’t what made the scene great.

The Memorable Quotes page on IMDb would be better served as a Memorable Scenes page, where users could submit short Flash clips of cool scenes in the movie. It would take some serious quality control, of course. But the process of evaluating quotes to go on the Memorable Quotes page takes quality control today. So it’s a question of degree – more people watching video – rather than direction. Set some limits on file size and the number of uploads per user per day and you’ve blocked out a lot of spammers already.

(And, of course, it’d probably fail under the DMCA. But that’s another hurdle entirely)

The idea of users submitting scenes they liked – bits of video to stream on the Internet – would be unthinkable in 1992. It’d be a stretch in 2002. In 2010, however, it’s the cornerstone of a business model. That’s why the IMDb Memorable Quotes page used to have more actual quotes than it does today: because that’s all that was conceivable to a user in the pre-UGC era. Sure, I’ll bet users wished they could reconstruct an entire scene in an upload. But such a thought was impossible in the 20th century.

But now, of course, all that is possible. And unless IMDb creates a forum for people to upload that sort of rich content, the Memorable Quotes page will continue growing cluttered.

That’s not a prediction of doom: that’s the way online media is evolving. If I want to relive the scene where the T-101 lowers into the vat of molten steel at the end of Terminator 2, I can search for the dialogue on the Memorable Quotes page for T2 on IMDb. Or I can look for the video on YouTube. Which will be more satisfying? There’s no collection of text – [John Connor beats his fists against the T-101’s chest, weeping] – that can match the melodrama of watching the actual scene.

The Memorable Quotes page is as cluttered as it is because the users of IMDb want that rich experience. They want to recreate the intense emotional experiences they felt watching a well-constructed scene for the first time. But the language of film is too complex for that. You can’t capture the greatest scenes in cinema with stage directions: [Rick lifts Ilsa’s chin up; Major Kong straddles the bomb; Luke lets go of the antenna; the tattooed prisoner throws the detonator out the ferry window]. You need the moment itself. And technology has evolved to preserve that moment. IMDb needs to evolve, too.

But don’t quote me on that.

While Quotes Editor, I enforced a style that Perich recalls fondly, one in which quotes were by and large pithy, could stand on their own with minimal context (e.g. stage directions), and stated something truly memorable: something about the human condition, for instance, or something that could whisk the reader right back into the emotional heart of a scene.

During my tenure we had no quotes from movie trailers, no quotes that could not be understood out of context, and few overlong scenes. The ones of those that I did include came from prolific and reliable quote submitters whom I did not wish to alienate by disregarding the work they’d put into transcribing them; and even then, I usually managed to carve them up into separate bite-sized quote morsels.

Problem was (as Perich rightly points out) that ensuring the accuracy and suitability of quotes that IMDb users submitted — in ever-increasing numbers, with an ever-decreasing signal-to-noise ratio — was nearly a full-time job all by itself 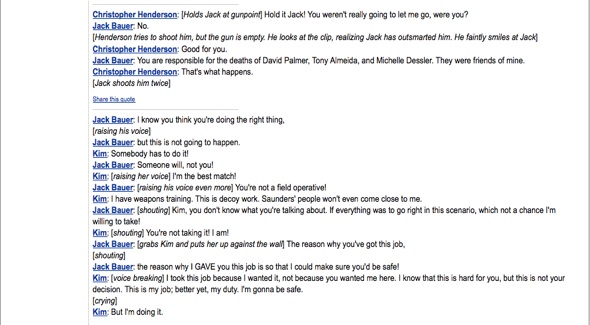 20 Comments on “The Evolution of the IMDb Memorable Quotes Page”