(Update from an inside source; see page 2)

This is a quote.

Reasoning will never make a man correct an ill opinion which by reasoning he never acquired. – Jonathan Swift, “Letter to a Clergyman”

This is one of my favorites. It’s saved me a lot of trouble on the Internet by keeping me from entering foolish arguments. I know better than to waste my time arguing with someone who’s completely irrational, because I can’t reason him out of something he didn’t reason himself into in the first place.

Jonathan Swift, one of the most noted satirists of the last millennium, was a master of witty epigrams. This one has all the hallmarks. It’s short. It’s easy to remember: it repeats the word “reasoning” twice at roughly the same place in each clause, even at the cost of making the second one (“… which by reasoning he never acquired”) a little awkward. That repetition creates a parallelism within the sentence that also aids in remembering it. Finally, and most important, it shines a light on an unknown facet of human experience. When we hear it and understand it, a switch is flipped in our heads: ah, that makes sense. This is a memorable quote.

Here’s another one of my favorites:

The person who experiences greatness must have a feeling for the myth he is in. He must reflect what is projected upon him. And he must have a strong sense of the sardonic. This is what uncouples him from belief in his own pretensions. The sardonic is all that permits him to move within himself. Without this quality, even occasional greatness will destroy a man. – Frank Herbert, Dune

This one’s not quite as pithy. You probably won’t memorize it on the first go, or even after the sixth or tenth time reading it. Like most of Herbert’s writing, it covers a tremendous span of human experience in a few short sentences. Packed tight in there, we get the notion of a person who “experiences greatness” (what does that mean?), the idea that humans live in a “myth” (so that’s not just something in books?), the idea that people are “projected upon” and can “reflect” that projection back (projected what? reflect how?), etc. I like it because of the value it places on a sardonic sense of humor: cynicism without bitterness. There’s nothing wrong with being great, Herbert is saying, but you should never believe fully in your own greatness. Or, to put it another way, don’t believe your own press.

In any case, even if you don’t remember the exact wording, you’ll remember the idea that’s awakened in your head. That’s one of the most beautiful things about Dune: the raw density of ideas crammed into its pages. So you revisit the words until you get them right. This is another memorable quote. If you don’t like it, Dune has hundreds more.

The universe is bigger than our ambition.

With me? Good. The following is not a memorable quote.

The Joker: [as he smacks his lips] You know, you remind me of my father.
[the Joker pulls out his switchblade and brings it to the Gentleman’s mouth]
The Joker: I hated my father!
Rachel Dawes: [off-screen] Okay, stop!
[turns to face Rachel, tosses the Gentleman to his thugs and approaches Rachel, adjusting his hair with the knife]
The Joker: Well, hello, beautiful. You must be Harvey’s squeeze, hm? And you *are* beautiful.
[the Joker hovers around the incredibly nervous Rachel]
The Joker: Well, you look nervous. Is it the scars? You want to know how I got ’em?
[He grabs Rachel’s head and positions the knife by her mouth]
The Joker: Come here. Hey! Look at me. So I had a wife, beautiful, like you, who tells me I worry too much. Who tells me I ought to smile more. Who gambles and gets in deep with the sharks… Look at me! One day, they carve her face. And we have no money for surgeries. She can’t take it. I just want to see her smile again, hm? I just want her to know that I don’t care about the scars. So… I stick a razor in my mouth and do this…
[the Joker mimics slicing his mouth open with his tongue]
The Joker: …to myself. And you know what? She can’t stand the sight of me! She leaves. Now I see the funny side. Now I’m always smiling!
[Rachel knees the Joker in the groin; he merely laughs it off]
The Joker: A little fight in you. I like that.
Batman: [off-screen] Then you’re going to love me.
[attacks him]

That’s not a quote. That’s someone reconstructing a scene from Christopher Nolan’s 2008 film The Dark Knight. It includes lines of dialogue, which makes it like a quote. But the stage directions ruin it. They break up the lines of speech – which are phenomenal – and halt the momentum. The effect of reading [the Joker mimics slicing his mouth open with his tongue] is nowhere near the effect of watching Heath Ledger do it on a fifty-foot screen. Additionally, the stage directions incorporate directorial comments. Rachel is “incredibly nervous.” The Joker “merely laughs off” the groin shot – maybe he’s laughing to cover the immense pain? Whoever submitted this believed, wrongly, that the lines of dialogue would not stand on their own merits.

So why does IMDb call this a Memorable Quote? 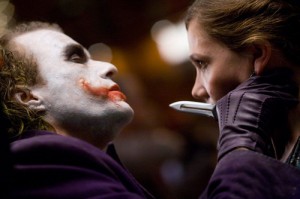 People always trying to guess what I MEAN.

It wasn’t always this way. The Internet Movie Database has been on the World Wide Web, in one form or another, since 1992. In Internet terms, it is ancient but not decrepit. It’s been cataloging details about movies for longer than many of its commenters have been alive. In the earlier days, when it was run entirely by volunteers, quality control was a lot sketchier. I remember for several years the trivia page for The Usual Suspects asserted that “Dean Keaton” was Gabriel Byrne’s real name.

But the quotes were legit:

Verbal: [referring to Rabin] That guy is tense. Tension is a killer. I used to be in a barbershop quartet in Skokie, Illinois. The baritone was this guy named Kip Diskin, big fat guy, I mean, like, orca fat. He was so stressed in the morning…
Dave Kujan: Verbal, you know we’re trying to help you.
Verbal: Sure, and I appreciate that. And I wanna help you, Agent Kujan. I like cops. I would’ve liked to have been a fed myself, but my CP…
Dave Kujan: Verbal, you’re not telling us everything. I know you know something.
Verbal: I told the DA everything I know.
Dave Kujan: Verbal, I know you like Keaton. I know you think he’s a good man.
Verbal: I know he was good.
Dave Kujan: He was a corrupt cop.
Verbal: Sure, 15 years ago, but he was a good thief. Anyway, the cops wouldn’t let him go legit.
Dave Kujan: Dean Keaton was a piece of shit.
Verbal: Are you trying to get a rise out of me, Agent Kujan?
Dave Kujan: I just wanna hear your story.
Verbal: It’s all there. May I have a cigarette?

See? A quote! It captures a sequence of dialogue. There’s one parenthetical remark at the top, and that’s just to introduce who the dialogue is about. Other than that, it’s just lines. There aren’t any stage directions like [leans menacingly in] or [smiles blandly] – two things that Chazz Palmintieri and Kevin Spacey, respectively, do in this scene.

Of course, all of the pages on IMDb are being updated all the time. So even The Usual Suspects‘ Memorable Quotes page, which has been around for over 14 years, has some “enhanced” quotes on it. And the age of a movie is not a benchmark, either. The 1982 movie Android, starring Klaus Kinski, is even older than The Usual Suspects. But it was (I believe, since IMDb doesn’t post its version histories) added later, since it has the following on its Memorable Quotes page:

[Looking at Maggie within the couple of minutes that he met her]
Max 404: Your lips! They’re, uh, quite full, aren’t they?
[Maggie’s face goes through several emotions: embarrassment, shyness, appreciation, and realization that Max has never seen a woman before]

In no sense of the word is that a “quote.”

At this point, you’re no doubt tempted to look up the word “quote.” Then we can see if what passes for “quotation” on IMDb can be shoehorned into the working definition. You can do that if you like (I’ll even Google it for you), but that’s a waste of our time. The point of a definition is to educate. It’s not meant as a legal precedent. It’s not meant as a vast tent under which we can take shelter if we find a dry corner. “See? Reconstructing our film criticism of a scene from Android does count as a ‘quote,’ if you take this very narrow reading and sort of squint.” That’s casuistry. And, though you might not believe me, that’s different from overthinking.

Why does this matter?

20 Comments on “The Evolution of the IMDb Memorable Quotes Page”