If you live in New Orleans, you know how screwed up New Orleans is. The weather’s miserable. Your economy relies on tourism and encouraging people to act ridiculous. Your politics are a history of corruption. It’s one of those situations where, if you don’t want to cry, you have to laugh. Fortunately, N’awrlins laughs at itself louder than anyone else does. The city embraces the mixed bag of cultures, languages and economic classes that define the bayou.

First: Creighton Bernette and the Krewe du Vieux. The Krewe du Vieux is a real organization, a parade known for its satirical and adult themes. They are one of the earliest parades to march in the Mardi Gras festivities every year. The 2010 Krewe du Vieux parade took to the French Quarter on January 30th, with Dr. John as the “King” of the parade. 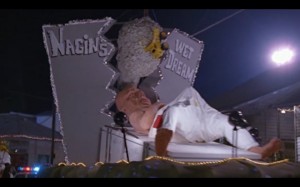 The important thing is to be classy.

In Episode 5 (“Shame Shame Shame”), we listen in on Bernette’s krewe planning their floats and costumes for the parade we witness in Episode 6.

LADY: Some of our sub-krewes: they want some kind of acknowledgment of the storm. A serious acknowledgment, not that tongue-in-cheek thing we usually do.

BERNETTE: I’m most serious when my tongue’s in my cheek.

MAN: Well, how serious an acknowledgment are we talking about here?

LADY: Well, like a … a riderless horse at the head of the parade.

BERNETTE: The sacred purpose of Krewe du Vieux is to mock the serious. Vote?

The most striking thing about that whole scene isn’t the Krewe refusing to be serious. That fits with their aesthetic. The most striking thing is how seriously they refuse to be serious. The vote is humorless (aside from checking in with K-Doe) and direct. And if the stated purpose of Krewe du Vieux is to champion artistic expression and individuality, why are they shooting down their sub-krewes ideas with a parliamentary vote? What if the Knights of Mondu decide to make a serious acknowledgment of Katrina anyway? Will they get excommunicated?

In Episode 6, the actual preparation for the parade begins. Toni calls her husband while on the road, asking that he make sure their daughter Sofia does her homework. Bernette nods absently, watching with approval as Sofia works on her costume. A few days later, once Toni gets home, we see what that costume is: a sperm. Sofia’s going to march as a sperm, issuing forth from Mayor Ray Nagin’s erect penis while he masturbates, in the Krewe du Vieux parade. Toni can’t quite comprehend this at first, making a few incorrect guesses as to what Sofia’s supposed to be. “A pearl necklace?” she says; Bernette stifles a chuckle. 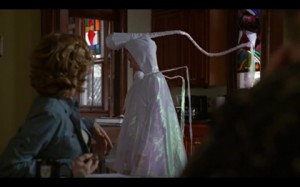 Toni has a hard time grasping it.

SOFIA: The sperm lead the way!

TONI: As sperm so often do! And at what point did you decide to abdicate as the parent of a fifteen-year-old girl?

BERNETTE: She knows everything anyway. You know everything, right Soph?

TONI: Creighton! This is over the top.

TONI: But this is just … offensive.

BERNETTE: The mayor’s performance is offensive. The indifference of the state and federal government is offensive. Fuck ’em if they can’t take a joke.

Depicting an ejaculating Mayor might render the Bernette family’s legitimate complaints about New Orleans Parish – e.g., its inability to locate prisoner David “Daymon” Brooks – ridiculous. Also, dressing up their not-unattractive teenage daughter as a sperm and sending her to distribute condoms during Mardi Gras might, to phrase it gently, put her at some risk. To Toni these fears are obvious. Creighton has not even considered them. He doesn’t consider them mitigating factors or things to apologize for. They don’t even cross his radar.

Creighton Bernette (an apparent homage to Carol Creighton Burnett – thanks, commenter Ezra!) takes his satire very seriously. This is odd because satire isn’t a serious subject.

Satire is, notionally, humorous. An ideal satire is supposed to produce a disbelieving laugh in the audience, followed by (if a Juvenalian satire) some corrective action at the ill being satirized. Consider Jonathan Swift’s “A Modest Proposal” as the archetype. It’s stood the test of time because it marries a civilized tone with a barbaric suggestion. The absurdity of the gap between the two jars the reader, hopefully resulting in a laugh. Balancing across that gap, however, is really tough to pull off. It must have taken Swift quite a few drafts to get “A Modest Proposal” right. Too formal and the audience misses the joke. Too ridiculous and the joke is sprung too early. One can imagine sleepless nights hunched over a writing desk, ink dripping from the quill onto a blank page, before Swift came up with the line “A young healthy child well nursed, is, at a year old, a most delicious nourishing and wholesome food …” And the rest is history.

Treme shows us the sleepless nights but not the end product. By the time we actually see the Krewe du Vieux march – the very end of Episode 6 – the joke has already been spoiled. We know they’re going to feature a float of Ray Nagin stroking his hardened penis. Any shock value is lost to us, the TV audience. What we saw, instead, were the unfunny parts of the satire: all the work that went into it. The Krewe masterminds debating how they want to acknowledge the storm. The Bernettes making their costumes. If Treme wanted us to be shocked, they’d have shown us the parade, not the planning behind it.

So what does Treme want? Treme wants us to realize how seriously New Orleans takes its satire.

5 Comments on “Overthinking Treme: You Can’t Be Serious”